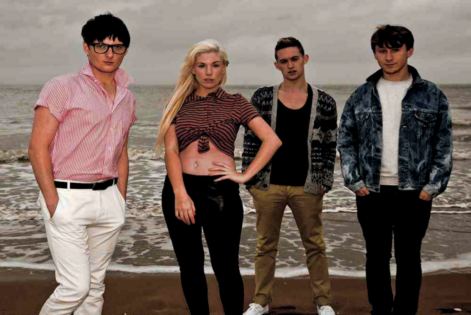 With twin shots of sub-two minute surf pop, this is Two Wounded Birds in party mood, flicking up their collars and spitting out the gum. A double a-side single that’s as fast-paced, frenetic yet fancy free as anything you’re likely to hear in 2011. Both recorded in single takes at Chatham garage hotspot Ranscombe Studios, their analogue perfection adding immediate, punked-up shots of adrenalin to a rapidly developing Two Wounded Birds songbook.

Last year the Margate four-piece received a leg up from Moshi soul mates The Drums – touring with the band on their UK tour and releasing their debut EP on guitarist Jacob Graham’s Holiday Records. It was a break out moment for a band embued with the sand, sea and occasional sunshine of their rundown Victorian paradise. Receiving support at radio from Huw Stephens & Steve Lamacq among others, the band played a packed Social for the former in January, and will play Camden’s Bull & Gate for the latter on Wednesday 23 March before a busy Summer schedule including Camden Crawl and Bestival / Camp Bestival.

Formed in the late, sultry Summer of 2008, Two Wounded Birds are kids by the sea, making music inspired from the haze of their childhood. Long drives with Beach Boys compilations in the tape decks. Dad dropping Chess Records and Link Wray on the record deck of a Sunday morning. Afternoon showings of Grease on TV.

Tracy Emin aside, not much in the way of culture has come out of Margate for a long long time… the town more renowned for its decrepit streets and state of disrepair, than the idyllic seaside resort it once was. But those Summer dreams have never deserted the place, and a trip to Margate beach in hot sunshine remains as tantalising a treat as it ever has, as long as you’re looking out to sea. That feeling, that moment, that wanting is the essence of Two Wounded Birds…