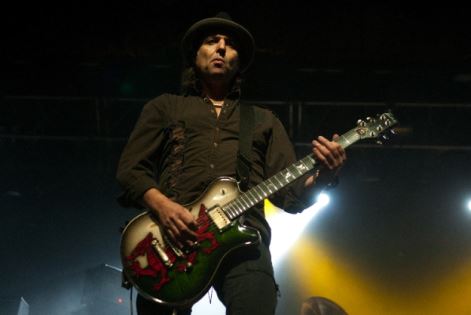 Thursday night is set to be livened up by these two! Throwing down the party gauntlet are returning favourites, the PHIL CAMPBELL ALL STARR BAND.  The MOTORHEAD guitarist had such a great time at BLOODSTOCK last year, he’s coming back to do it all over again.
Nottingham thrashers INCINERY are happy to take up the challenge, stating “Things have been stepping up a gear and the unbelievable is becoming a reality, so it is with great excitement that we return to the place that started it all for us!  It’ll be a real homecoming, and we’re looking forward to playing at what is the keystone of the metal scene in the UK.”
By name but not by nature, DIABOLICAL will bringing their unique brand of Swedish death metal to the Sophie Stage on Friday.  They declare, “It is with great pleasure that we announce our appearance at BLOODSTOCK!  Rest assured we will take equally great measures to make this a highly memorable show!”
BLOODSTOCK is also pleased to add Mancunian black metallers, WINTERFYLLETH to Friday’s line-up.  For a taster of their current album, ‘The Threnody of Triumph’.

Southwest metal band CAMBION are determined to get heads banging on Friday. Drawing their djent/tech/prog influences from the likes of Fear Factory and Meshuggah, the band commented, “We are beyond happy to be playing the best UK festival, BLOODSTOCK!  CAMBION is growing into a force to be reckoned with and that’s down to hard graft and BLOODSTOCK itself for believing in and supporting the next generation of metal bands!”
Joining them on Friday are Norwegian groove metallers, ZEROZONIC.  The band couldn’t be more excited to get to play at Catton Park, exclaiming “Finally, ZEROZONIC will play a big festival outside Norway for the first time. It’s about time!  Ten years of existence and three albums in we are very excited to play the amazing BLOODSTOCK.  Let’s get it on!”  ZEROZONIC’s current album ‘Aftersane’ has just been re-released by their new label Metal Age Productions, and the band are busy working on their fourth album.