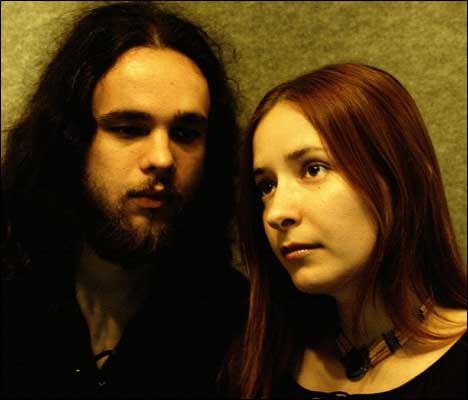 The Moon and the Nightspirit is a neofolk / medieval folk band from Hungary, formed by Ágnes Tóth (vocals, violin) and Mihály Szabó (vocals, acoustic 12 string guitar), in 2003. Their latest album is "Mohalepte" (spring 2011, self-release), bewitching sylvan music, inspired by nature.
When live, additional members include: Gábor Végh (drums, percussion) and Gergely Cseh (bass).
They craft a distinct artistic signature, reflected not only in their music but also in the unique visual universe that illustrates their work.
Ágnes, a skilled singer and multi-instrumentalist, is also the talented lady responsible for the paintings which bring to The Moon and the Nightspirit’s music a fantasy-setting populated by creatures that trace back to traditional Hungarian legends and folklore. These memories of times forgotten also echo through the lyrics written by guitarist Mihály, which outline the spiritual mindset behind the project.
Such a combination has been greeted with growing enthusiasm since the release of their 2005 debut album on Equilibrium Music, “Of Dreams Forgotten and Fables Untold”, and the early shows that followed, which included an appearance on Hungarian National Television. Later, and in support of “Regõ Rejtem”, their second album, The Moon and the Nightspirit had the opportunity to tour throughout most of Europe. Playing in small fair markets and large festivals alike, including prestigious events such as Trolls et Legendes (Belgium), Wave-Gotik-Treffen (Germany) and Castle Party (Poland), the band shared the stage with names like Corvus Corax, Faun, Blackmore’s Night or Korpiklaani, and gradually conquered a prominent role in the Pagan Folk scene.
Returning with “Ösforrás”, their third album, the duo invite the listener to the star-woven realm of the wise elders, the ones who knew the secrets of nature and walked the path of light eternal, and embody on their new material a more tribal and exotic approach, in intense rituals dedicated to the old and eternal tradition.
This collection of songs, which feed from the Ösforrás - the “Source Pristine”, the primordial womb, from which all has sprung, a sacred place where all is one - comes together as an offering to the slumbering gods of the old forests, streams and stones.
Weaving a web where threads of ancient mysticism combine with dreamy atmospheres, where World Music acquires a bewitching Pagan aura, The Moon and the Nightspirit live up to their potential as one of the most exciting and refreshing acts in the genre.
“Ösforrás” is released by Equilibrium Music, in two formats: Digipak CD with booklet, and collector’s edition hard-cover 19,5cm x 14cm Digibook (limited to 1000 copies), with full-colour booklet including large reproductions of several paintings created for this purpose. The collector’s edition also includes one exclusive bonus track featuring guest appearances by Catarina Raposo (Dwelling), Saskia Dommisse (Poets to their Beloved) and Alessandra Santovito (Hexperos).
Official site: http://www.themoonandthenightspirit.com