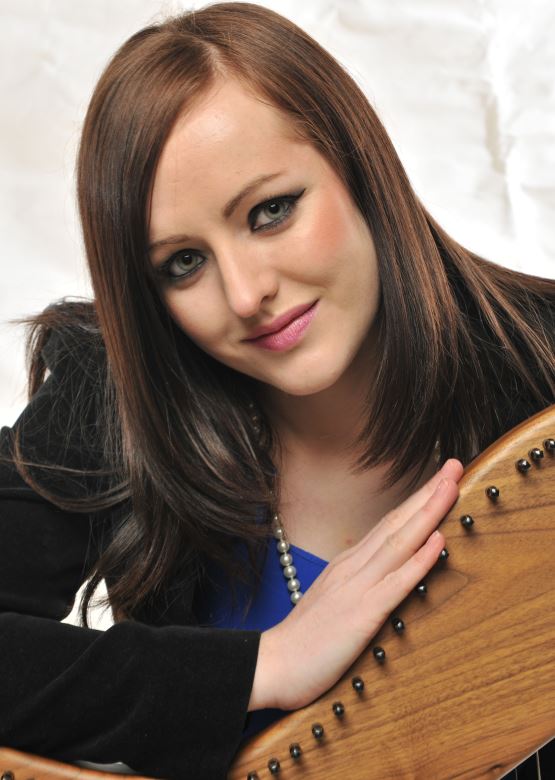 Rachel Hair is one of one of Scotland's finest players of the Clarsach, the traditional Harp. Born and brought up in the Scottish Highland village of Ullapool, Rachel was first introduced to the harp at the age of 10, while attending Feis Rois, one of the many Gaelic Arts Tuition Festivals, in Scotland.
13 years on, she has now graduated with a first class honours degree in Music from the BA Applied Music at the University of Strathclyde (a course which has produced musicians including Julie Fowlis, Anna Massie, members of Croft no 5, Dochas and Brolum), where she was also awarded the Alexander Stone Prize for Outstanding Performance in her final solo honours recital.
Of mixed heritage (her mother being from Ireland, her father, Scotland) Rachel has developed her own style of playing traditional music on the harp, highly influenced from her time studying alongside folk, jazz, classical, funk, rock and pop musicians, being brought up in the Scottish Highlands and her own Irish family roots.
Rachel has been going from strength to strength as a professional musician and has steadily begun to gain recognition as a performer and a composer. Since turning professional, she has played several times throughout Europe, India, toured twice throughout the USA, as well as playing regularly throughout Scotland and the UK.
She has performed on the famous BBC TV Hogmanay Live Show with top Musicians Eddie Reader, Phil Cunningham, Karen Matheson, Michael McGoldrick, John McCusker and Aly Bain.
Rachel has also a soloist at many festivals including the Edinburgh Festival Fringe, the much coveted Edinburgh International Harp Festival, Gosport and Fareham Folk Festival and many times at Glasgows Celtic Connections Festival, where this year she was filmed playing with Irish harper Laoise Kelly, for BBC TV.
Rachel has just released her eagerly awaited debut solo album, "Hubcaps and Potholes' on March Hair Records.
The album (with 7 out of the 11 tracks featuring solo harp) shows the harps strengths as as a solo instrument, demonstrating its strong rhythmic capabilities, on tunes from Scotland and Ireland together with several of Rachel’s own compositions.
Rachel is joined on 3 tracks by pianist Douglas Millar, and on 1 track by traditional flute player, Peter Webster, and their imaginative, confident but sensitive playing, blends perfectly with the harp.
Teaching
Rachel is a highly experianced, and much sought after teacher of the harp, with many of her pupils progressing to win gold medals at both national and local levels of the Gaelic Mods and Music Festivals.
At present she reguarly teaches for Feisean nan Gaidheal (Gaelic music tutition festivals, ), Comhaltas Ceoltóirí Éireann (Irish music) and Glasgows own Celtic Connections Festival. Rachel frequently travels far and wide to countries which have included Switzerland (Celtic Days Harp Festival) , Finland, Denmark, the USA and India, to teach not only Scottish/Irish Harp but general Traditional/Celtic Music and Groupwork. She teaches using the traditonal "by-ear" method with a strong emphasis on fun and enjoyment.
She has also lectured in Scottish and Irish Traditional music at Universities in both America and Scotland.
http://www.rachelhair.com/