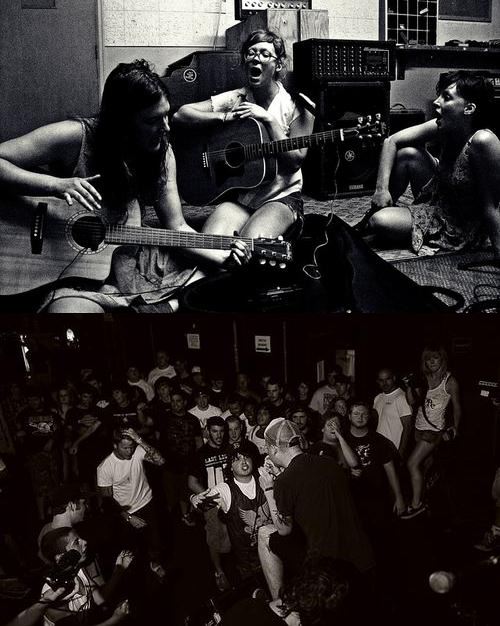 There are two artists called Mountain Man:
1) A folk trio from Bennington, Vermont.
Streaming tracks: http://mountainman.bandcamp.com
Become a fan at: http://www.facebook.com/mountainmansquint
2) A hardcore band from Massachusetts featuring members of I Rise and Last Lights.
They have a Self Titled demo, two full lengths: One and Grief
with new songs on the way.
Streaming tracks: http://www.myspace.com/mountainmanhc
Become a fan at: http://www.facebook.com/mountainmanhc
1) Mountain Man is a group of three young women, based in Bennington, Vermont - Amelia Meath, Molly Sarle, and Alex Sauser-Monnig- who sing with or without Alex's guitar.
There's a fragile balance between the three very different styles and personalities in these three young women. They are all songwriters, and having all three approaches with the same treatment on the same album is really satisfying. There is Alex's guitar based songs, with deep, slow moving roots. Amelia, writing for voices alone, creates rising complicated lattice structures. Molly also writes for guitar, but with space for more weight, drama, and tension.
They just started singing together in the spring of 2009, so it is really impressive what they've been able to do so far. They released a limited self-titled album, Mountain Man. It has already been sold out, and plans are on the way for a fall release. They enjoyed a great tour this summer, and look forward to future shows!
Songs available here: http://www.mountainman.bandcamp.com
Facebook fan page: http://www.facebook.com/mountainmansquint
2) Mountain Man has emerged as not only the next chapter of the underground Worcester music scene, but as an entire movement. Featuring members of the budding hardcore band Last Lights, whose career was cut short by the untimely death of their singer, Mountain Man has picked up where Last Lights left off and has garnished similar acclaim in their young existence.
Beginning in 2009, Mountain Man jumped out to a furious start. Shows were booked with everyone from Strike Anywhere to Set Your Goals, cementing the fact that the band did not set any genre limitations for themselves. After delivering an impressive self-released demo, it wasn’t long before the band signed a deal with up and coming indie label, Mightier Than Sword. The 10” EP “One.” was released in March 2010 to rave reviews. The record showcased the band’s influences from genre pioneers like Neurosis to modern metallic heros like Converge.
Think Fast! co-owner Larry Scott comments on the signing, saying “To be able to have a hand in helping Mountain Man develop, grow, and get their music out to kids worldwide is why we started this label. The fact that they are hardworking and motivated, on top of being one of the best newer bands we’ve heard, sealed the deal for us.”
Drummer Patrick Murphy adds, “since the formation of Mountain Man, Think Fast! have been big supporters and people we could reach out to if we ever needed help in anyway. When they asked us if we wanted to release a record with them the answer was an obvious one. It truly feels like Ryan and Larry both want our band to succeed as much as we do, and they have faith in us to let us make the record we want to make.”
Since the release of “One.”, Mountain Man hasn’t let up. The band hit the road with Soul Control (Bridge 9), followed by a 5 week US headline run to support their record. Confirmed upcoming runs include Comeback Kid, Four Year Strong, and a slot on the Think Fast! Records & Think Fast! Booking 2010 Showcase Tour.
Murphy notes, “We are excited to finish writing, record the new album, and see what the future holds for Mountain Man. We couldn’t ask for a better situation to be in.” In October, Mountain Man will enter the studio with Alex Garcia-Rivera (American Nightmare, Saves The Day) to begin tracking their debut full length for Think Fast! Records. The effort is expected to surface early on in 2011.