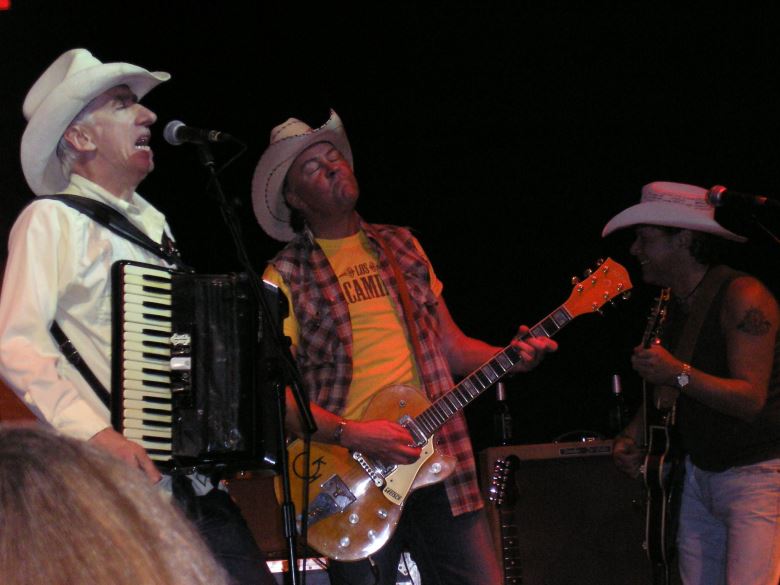 Los Pacaminos are a band you can absolutely count on for a great night out!
While the name may mean little (as yet) to music lovers, at least one member of this highly respected group will be very familiar. The Tex-Mex outfit is led by one of the UK’s finest and best loved vocalists - Paul Young.
Paul is not the only luminary in the seven piece band, however. Some of the best musicians in the business have teamed up to present the incendiary mix of Tex-Mex classics, Spanish songs and original material that make up the music of Los Pacaminos.
Los Pacaminos first came together in 1995, the result of Paul’s desire to get back to basics. As he explains “I was between record labels and writing material for a new album but I wanted to play live again. I’ve always loved the Tex-Mex sound and knew a few musicians who had a similar passion for this type of music. So I asked them to join me in forming a band.
It started out just for fun, playing simply for the pleasure of it, and it just took off from there. What’s really nice is that everyone else in the band can sing too, and they do, all in their own very different styles. It’s real bar room stuff, foot stompers, not too many slow songs – a real party atmosphere!”
As for the name… “Los Pacaminos? It means nothing! It’s a nonsense phrase we chose, which is close to the term “Pack’em in” meaning the audience. Apparently it is also similar to an Argentine name for street boys which is OK too!”
Tex-Mex music is somewhere between the Mariachi and Norteno styles of Mexico and the country/blues sounds of South-Western America. The band empathises with Ry Cooder, Flaco Jiminez, The Texas Tornadoes, Los Lobos and Sir Douglas Quintet. (Their set includes songs like “Wooly Bully” the national anthem “La Bamba” and sometimes, if enough tequila is flowing, even “Speedy Gonzales”…)
The band’s long-awaited first album is suitably titled “Los Pacaminos” and is out on What Records and distributed through ID/Universal, it features 12 great tracks guaranteed to get your pulse racing and the dancing shoes on. Full track listing reads as follows: My My My; Manana; Perdita; La Mesa; Shadows on the Rise; Raised on Margaritas; Poor Boys; Handsome Man; Tico; Do We Want The Same Things; Two Margaritas; Tierra D’Ensuenos.
The band comprise some of the best known names in the business. From a variety of backgrounds they’ve covered all kinds of music but are all in accord on one - the sound that’s brought them together as Los Pacaminos. The line-up is as follows:
Drew Barfield: Guitar / Vocals. From A&M signings The Keys and The Big Heat, his song-writing credits include Go West, Joe Jackson, Paul Young and Level 42.
Melvyn Duffy: Pedal steel. Probably the finest young pedal steel guitar player in Britain, his credits include Jimmy Nail, Leo Sayer, and Deana Carter while his most recent tour was with Robbie Williams.
Steve Greetham: Bass / Vocals. Has worked with Joan Armatrading, Paul Young, Julia Fordham and Chris De Burgh.
Matt Irving: Keyboards / Accordion / Vocals. Has played with a whole host of artists including Lords Of The New Church, Paul Young, Squeeze, Chris Rea, Jools Holland, Roger Waters and Manfred Mann.
Jamie Moses: Guitar / Vocals. An accomplished session player, he’s worked with The Pretenders, Mike And The Mechanics, Chaka Khan, Gary Barlow, Mica Paris, Tony Hadley, Pete Townsend, Karl Wallinger, Paul Rodgers, Curtis Stiegers and Dave Stewart…to name but a few.
Mark Pinder: Drums. Several renowned cult acts claimed Mark’s services including the Vampire Bats From Lewisham and Zaine Griff before he headed off to join Paul Young and Alison Moyet.
Paul Young: Guitar / Vocals. Needs little introduction…from his days with Q –Tips to his number one solo hits “Wherever I Lay My Hat” and “Come Back And Stay”, as well as “Every Time You Go Away”, his hit albums and his collaboration with top Italian star Zucchero, Paul has always been loved for his unique vocal style and great personality.
ENQUIRIES:-DAVE BEAL 07958 962299 email; davebeal00@hotmail.com