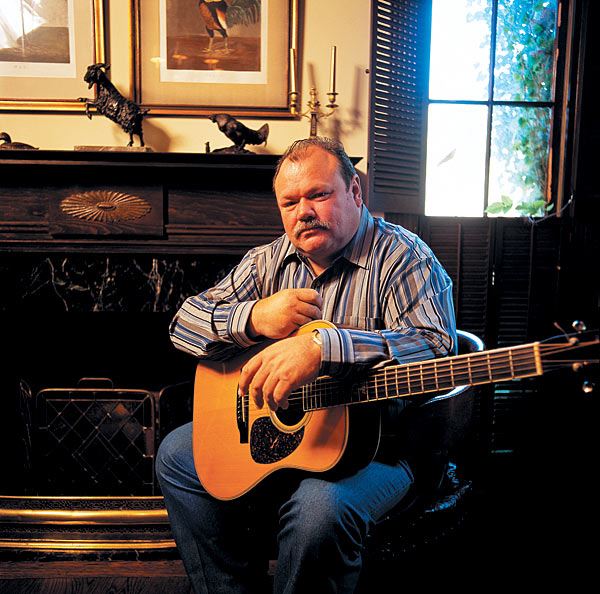 There are multiple artists called James King:
1) James King is a US bluegrass singer and guitarist.
James King was born Sept. 9, 1958, in Martinsville, Va., and grew up in Carroll County — one of the most fertile breeding grounds for bluegrass and old-time musicians. James’ father, Jim, and his uncle, Joe Edd, were both musicians of note. As James entered his teens, he began to take the music seriously too, particularly the music of his fellow Virginians, the Stanley Brothers. One of James’ closest mentors was Ted Lundy, whose raw and heartfelt brand of bluegrass exerted a particularly strong influence on his music. Following a stint in the Marine Corps, King relocated to Wilmington, Del., where he started a band with Lundy’s sons, T.J. and Bobby. The Lundys introduced King to legendary bluegrass deejay Ray Davis, who paired King with Ralph Stanley for two mid-’80s releases, Stanley Brothers Classics and Reunion (also with George Shuffler), on his Wango label. In 1988, King released his first record under his own name, James King Sings Cold, Cold World. In the 1990s, Dudley Connell of the Johnson Mountain Boys brought King to the attention of Rounder’s Ken Irwin. Irwin brought together Connell and a band of bluegrass all-stars to back up King on 1994’s These Old Pictures and 1995’s Lonesome and Then Some. King began to tour steadily, gradually assembling the James King Band. The group was named emerging artists of the year by the International Bluegrass Music Association (IBMA) in 1997. 1998’s Bed by the Window was the recording debut of the James King Band, and its gripping, bittersweet title track — about a man in a nursing home with a vivid imagination — was nominated for IBMA’s 1999 song of the year award. King is also a member of the bluegrass supergroup Longview, along with Connell, Don Rigsby, Joe Mullins, Glen Duncan and Marshall Wilborn. Their self-titled 1997 debut was named recorded event of the year by the IBMA. The second Longview album, High Lonesome, arrived in 1999, followed by Lessons in Stone in 2002. King released 30 Years of Farming in 2002. The album featured the James King Band as the supporting instrumentalists, with a potent blend of classic bluegrass, hard core country and contemporary song craft. Including the country classics “Saginaw, Michigan” and “Carroll Country Accident,” King released The Bluegrass Storyteller in 2005. In April 2009, James married Julie Lillard of Cascade, Virginia, and now resides in Danville, Virginia.
2) James King (May 22, 1925 – November 20, 2005) was widely regarded as the finest American Heldentenor of the post-war period.
Born in Dodge City, Kansas, King studied music at Louisiana State University and earned a master's degree in 1952 from Kansas City University. He started singing as a baritone, and noticed in 1955 that his range was more that of a tenor. He retrained himself as a tenor and won the American Opera Auditions in Cincinnati in 1961. He made his debut as Don Jose in Bizet's Carmen with the San Francisco Opera. He sang the French and Italian repertoire with the Deutsche Oper Berlin from 1962 to 1965 and worldwide at most of the major opera houses, being a particular favorite at the Vienna State Opera, where he last appeared as Florestan in "Fidelio" in 1997.
He made his Metropolitan Opera debut in 1966. He sang at all the major opera houses in Europe and America and recorded extensively. One of his most famous recordings, however, was not in opera, but rather that of Gustav Mahler's Das Lied von der Erde, recorded with Leonard Bernstein and the Vienna Philharmonic Orchestra. His baritone partner in that recording was the renowned German singer, Dietrich Fischer-Dieskau.
He was married 3 times and had five children, and was married at the time of his passing to the former Elizabeth Lively.
He taught at Indiana University from 1984 to 2003.
3) There is a jazz bassist and composer with this name as well, see e.g. the album Allen's Odyssey.
James King is a native of Houston, Texas, now based in Washington, DC. He studied at Texas Southern University, Hampton University, and the University of the District of Colombia. Well-known in the mid-Atlantic region, he has lived and worked in the Washington, D.C. area since 1977. During his 25 plus year career, James has conducted clinics and maintained a rigorous performance schedule. He has performed with Stanley Turrentine, Buck Hill, Elvin Jones, Marlena Shaw, Ronnie Wells and Stephanie Nakasian, among others. He has appeared at major jazz festivals including North Sea, Montreal, and Pori Jazz.
4) James King is also a soul/rock singer appearing on the album “Expansion Soul Sauce 25”. 2011 collection, released to coincide with the 25th Anniversary of the Expansion label.