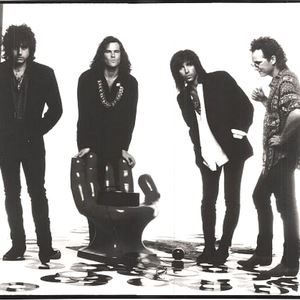 Dramarama is an alternative rock group which formed in 1982 in Wayne, New Jersey, United States, although they relocated to Los Angeles, California sometime later. Throughout all their incarnations, the band was led by singer/songwriter John Easdale. The band was best known for their 1985 single "Anything, Anything (I'll Give You)" which remains the most requested song in the history of the legendary L.A. alternative station KROQ. The band split in 1994 and reformed in 2003 after the original lineup was reunited on the VH1 show "Bands Reunited". Although they only had to play one concert for that show, the band enjoyed playing together again so much that shortly thereafter they officially reunited, releasing their first album in 12 years, "Everybody Dies" in 2005.
Since 1996, an evolving lineup of the band, always fronted by singer/songwriter John Easdale, has been performing in one incarnation or another (initially billed as Easdale solo but usually with assistance from former band mates), and from then until 2003 played occasional shows in the L.A. area, as well as in New Jersey. However, amid renewed interest since the Bands Reunited episode in January 2004 and a large-scale appearance at KROQ-FM's annual Inland Invasion festival concert (attended by more than 78,000 fans) in September 2003, Dramarama has been touring nationally in 2004 and 2005, and released their first new, full-length studio CD, titled "everybody dies," on October 25, 2005.
In 1982, Dramarama formed in and around Wayne, New Jersey, where founding member Chris Carter owned a record store called Looney Tunez Records. The initial line-up consisted of singer/songwriter John Easdale, "Mr. E Boy" (Mark Englert) and Carter, later joined by Peter Wood on guitars, Jesse Farbman on drums. Jesse would leave the group after the third album, and was eventually replaced with drummer Clem Burke, whose prior band was Blondie. Other early bandmates included keyboardists Theothorous Athanasious "Teddy" Ellenis and "Secret Weapon" Tommy Mullaney, who doubled as the band's tour manager.
The current lineup consists of frontman John Easdale and several players from Dramarama's former incarnation, including lead guitarist Mark Englert and rhythm guitar player Peter Wood (the only band member who moved back to New Jersey and still maintains a residence there). Rounding out the band are Los Angeles-based musicians Tony Snow on drums, and Craig Ballam (guitar) and Mike Davis (bass), the two of whom also maintain a side project called Shobud. In addition, Mike Davis is the official bass player for Judas Priest frontman Rob Halford's eponymous solo band, and appears on Halford's upcoming CD, Halford IV.
A number of prominent musicians has joined the band for studio sessions on specific tracks over the years, perhaps most notably pianist Benmont Tench of Tom Petty's Heartbreakers and guitarist Mick Taylor, late of the Rolling Stones, on Vinyl. In addition, fellow power pop artist Dwight Twilley lent vocals to several songs on hi-fi sci-fi, on which The New York Dolls' Sylvain Sylvain also made a vocal appearance.
In addition, other artists often join Dramarama onstage or in the studio, including bassist Steve "Muddy Shews" Shewchuk from seminal Jersey shore band Southside Johnny and The Asbury Jukes; keyboardist Morley Bartnoff from Cosmo Topper (formerly of the 1980s band Burning Sensations), and harmonica player "Trashcan" Ray Barwick, as well as former No Soap Radio members Danny Roselle on keys and guitar, and drummer Chris O'Hara.