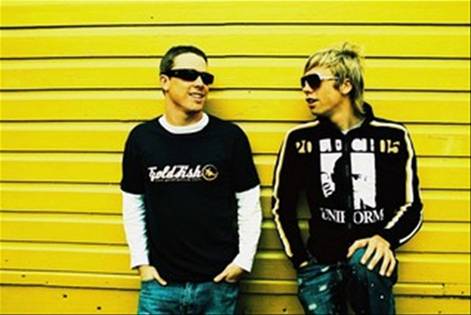 With seven weeks to go we can now reveal a whole host of bands and DJs added to the lineup for Southern Sounds Festival.

Joining INXS, Shihad and Just Jinjer on the main stage will be South African dance duo Goldfish and New Zealand’s I Am Giant.

I Am Giant are London based New Zealanders Shelton Woolright, Paul Matthews, Aja Timu and Brit, Ed Martin. Drummer Shelton Woolright is formerly from critically acclaimed triple platinum band Blindspott, one of New Zealand's most successful rock bands to date. I Am Giant have been successfully winning fans around the globe in the short time they have been together. Last year they became the Quiksilver Ambassadors for Europe which lead to countless festivals and events including Brixton’s Skate and BMX Jam, Quiksilver’s ‘Chromataphobia’ and the Quiksilver Pro Tour in Biarritz, France.

They will be joined by DJ Yoda, no ordinary scratch DJ. His seminal How To Cut & Paste series showcased a tongue-in-cheek mixing style that prompted Q Magazine to declare him “one of the ten DJs to see before you die”, whilst Hip Hop Connection voted him “one of the top three DJs in the world”. Completing the main stage lineup is XFM’s Eddy Temple Morris and Rob Diverted.

Southern Sounds is also excited to announce the line-up for the Crooked Arena, the third stage at the festival. Bringing some of the most world renowned turntablists to a common near you*, Southern Sounds can now announce exclusive DJ sets from Krafty Kuts, Freestylers, Adam Freeland, Rennie Pilgrem, Utah Saints and Elite Force. They’ll be joined by fellow DJs DJ Woodsy, Reveal, and Honeycombe.

Krafty Kuts is without doubt one of the world’s greatest DJs. Lauded in the UK, worshipped in Australia, acclaimed in America, where ever he plays he is guaranteed to cause a commotion with his riotous skills. With a career spanning over two decades,

The Freestylers have pushed boundaries, headlined sell-out shows, won endless awards, toured massive festivals and clubs, had international chart success, sold half a million records, have been inspiration to hundreds of acts around the world and were the very first electronic act to play fully live on legendary BBC show Top Of The Pops.

Utah Saints, the world renown duo, have released 7 Top 40 hits, 4 of which hit the Top 10, they have sold over 2 million records worldwide, supported U2 on a UK and European tour, set up and promoted first class clubs The Gallery and SugarBeatClub and have recorded and presented for radio stations such as Radio 1, XFM, Galaxy, Kiss and Ministry of Sound on-line.