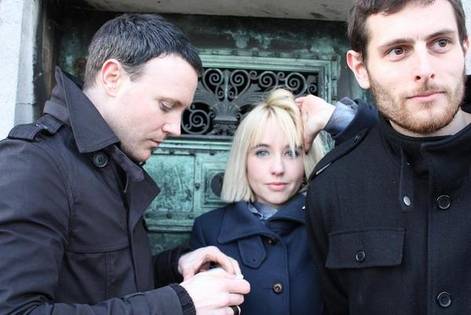 The Joy Formidable are amongst the latest acts confirmed for this years Dot to Dot festival that takes place in Bristol, Nottingham and Manchester.

Now in its sixth year, Dot To Dot Festival is established as the UKs best festival for checking out the hottest new talent around as well as catching all your favourite established bands. Touring Bristol, Nottingham and Manchester, three of the UKs most clued-up music cities, from the 28th to the 30th May, Dot To Dot’s ever eclectic line-up, crossing numerous genres is set to grow with the announcement of the latest wave of acclaimed acts joining the bill.

Dot To Dot Organiser Anton Lockwood (Of DHP Group) said: ‘This latest announcement brings some artists to Dot To Dot that we are long term fans of, like the mighty Trail of Dead, the stunning Joy Formidable, together with some of the most exciting new artists around like Cults and Braids. We aren’t forgetting the electronic music fans either, adding highly respected artists SBTRKT and Blawan to an ever growing bill.

First up for the latest line-up additions is The Joy Formidable. One of the hottest grungey-pop trios on the block, the intense power of their live show has propelled them to the top of the heap, with a sack-full of praise for their long-player The Big Roar, expect big things.

Austin Texas’s finest sons …And You Will Know Us By The Trail Of Dead will be joining Dot To Dot for the Bristol and Nottingham dates. Famed for their raucous live shows, the band’s latest album ‘Tao of the Dead’ has seen them strip their sound back, continuing their boundary smashing visceral riffing to acclaimed effect.

UK Bass behemoth SBTRKT will be on hand to slay crowds with his crisp and driving sound. Alloying deep, techy vibes and heavy electro to broken beats and wobbly bass, his sound is as unmistakable as his voodoo mask.

Benjamin Francis Leftwich whose awe-inspiring guitar playing and amazing harmonies have marked him out as one to watch for 2011 will be traversing Dot To Dot’s triumvirate of cities to the wow the crowds.

New York duo Cults have been causing a stir in the past six months and will be joining the Dot To Dot juggernaut to showcase their faultless 60s inspired indie-pop. Award winning folk singer songwriter Ben Howard will be entrancing crowds with just his acoustic guitar and his incredible voice that has won him a litany of accolades.

Five-piece pop-rockers Wolf Gang, led by Max McElligott will be pushing their 80s tinged grooves to the limit, neo-dubstep synth duo Alpines will supply their glacial thrills, heads down acid action, replete with thunderous drums, will come courtesy of Blawan, Canadian up-and-comers Braids will demonstrate the dreamy baroque hooks that have the world’s music press all hot and bothered, DOM will amaze one and all with their infectious reverb drenched surfer sounds and Sweden’s Royal Republic will add a touch of searing rock to proceedings.