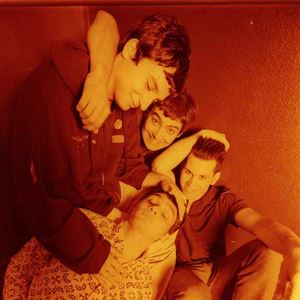 ...And You Will Know Us by the Trail of Dead is an indie rock band which formed in 1994 in Austin, Texas, United States. The band currently consists of Conrad Keely (vocals, guitar, drums), Jason Reece (vocals, guitar, drums), Autry Fulbright II (bass) and Jamie Miller (drums, guitar). As of 2011, the band has released seven albums: "...And You Knows by the Trail of Dead" (1998), "Madonna" (1999), "Source Tags & Codes" (2002), Worlds Apart (2005), "So Divided" (2006), "The Century of Self" (2009) and "Tao of the Dead" (2011).
The band is best known for their heavy yet anthemic music and their tendency to destroy their equipment at the end of their performances (a rock and roll tradition usually associated with The Who). According to the band's website, the name "...And You Will Know Us by the Trail of Dead" is taken from both an ancient Mayan ritual chant and an Egyptian burial text. Band members have also claimed that they made it up because it sounded cool and discovered the association after the fact.
The chief creative element of the band consists of Jason Reece and Conrad Keely. The two switch between drumming and lead vocals and guitar, both on their records and during their shows. (On some songs, [former] bass player Neil Busch sings lead vocals). Keely and Reece have been friends since their youth, meeting originally in Hawaii. They each formed their first band in 1993 soon after moving to Olympia, Washington. Keely started a band called Benedict Gehlen that only lasted a year. Nancyville was Keely's next project, though it also was short lived. Reece started with Honeybucket and then formed Mukilteo Fairies while living in Olympia. Dissatisfied with the northwest, the two ventured south to Austin, Texas and started playing as a duo under the moniker, "You Will Know Us by the Trail of Dead". The band expanded to include guitarist Kevin Allen and bassist Neil Busch. They then officially changed their name to "...And You Will Know Us by the Trail of Dead" (adding the conjunction and then the ellipsis for effect). The band is also known by the shorter name "Trail of Dead".
By 1998 they had issued their first release (a live cassette on local Golden Hour Records), followed by a self-titled full-length on Trance Syndicate. In early 2002, Trail of Dead released Source Tags & Codes to immediate critical acclaim, and made numerous critics' year-end top 10 lists.
In 2003, an EP named The Secret of Elena's Tomb followed up, which included amongst others "Mach Schau", which was the first recording of a song the band had written in their early days, as well as "Intelligence", a song with dominant electronic sounds, which was pulled from Jason Reece's electro side-project called A Roman Scandal.
In 2004, Neil Busch left the band due to health issues and was replaced by Danny Wood of The Rise. Together with additional drummer Doni Schroader (ex-Forget Cassettes) and keyboarder David Longoria (The Black), a revamped Trail of Dead embarked on an extensive worldwide tour in 2004-2005, which covered USA and Canada, and cities throughout Europe to promote their album Worlds Apart, which was finally released in January 2005 after some annoying issues with the label's corporate policies.
After the tepid critical and commercial reception of Worlds Apart, Conrad Keely became very frustrated and considered quitting the band altogether. Luckily, the band regrouped to record an EP, but the group's creativity blossomed, resulting in enough material for an album. Their latest full-length album, So Divided, was released on November 14th, 2006.