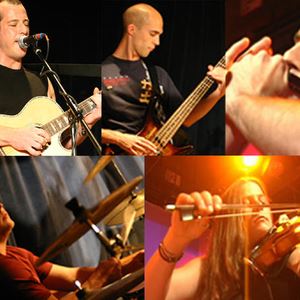 Maverick English Folk!
The Demon Barbers perform traditional English folk music, song and dance. The band consists of:
Damien Barber - Vocals, Guitar, Concertina, Rapper
Bryony Griffith - Fiddle, Vocals
Will Hampson - Melodeon, Harmonica, Morris, Rapper
Lee Sykes - Bass, Rapper
Ben Griffith - Drums
Damien Barber took the bold decision to become a professional folk musician at the end of the 1980s. He had strong folk credentials: raised in rural Norfolk and a regular (since the age of 5) at a folk club where Walter Pardon was resident, his other influences include Harry Cox, Sam Larner, Tony Hall and Peter Bellamy and his live performances and albums clearly marked him out as a committed traditionalist.
It came as something of a surprise, therefore, when he put forward the idea of forming an electric folk group at the end of the 90s. They took their name from Peter Bellamy’s affectionate nickname for Damien and became The Demon Barbers. Peter, another avowed traditionalist, had always had severe doubts about folk-rock, but in this case, he would have found no conflict: what the Demon Barbers played (and continue to play) was electric folk, part of a process of embracing relevant and appropriate new developments, in much the same way as folk music had over the years accepted and subsumed the concertina and the Spanish guitar.
The Demon Barbers added to Damien’s vocal and instrumental talents, Will Hampson’s melodeon and the vocals & fiddle of Bryony Griffith. So far, so trad. To this were added drum and bass (Ben Griffith & Lee Sykes). All the band’s members had links with dance and it was a natural progression as the band developed to incorporate Morris, Clog and Rapper Sword into the set. Thus The Demon Barbers became The Demon Barber Roadshow (www.thedemonbarbers.co.uk), immediately in-demand at festivals whether their focus was song, tunes, dance or even folk-rock.
The band developed in public through a couple of seasons of performances that were often, by their own admission live rehearsals, held once a month in a moderately-sized venue in Bradford. Those Sunday night gigs played host to some of the biggest names in folk music as the headline acts and here the music was evolving with the band, most notably through a spectacular multi-layered version of famous flower of serving men.
Those of us lucky enough to attend those groundbreaking gigs – or the band’s more public performances – were left with indelible memories. Clog and drum competitions…the drum’n’bass loop which backed Bryony’s fiddle and the weaving dance of the rapper dancing (not to mention smoke machines and UV lighting)…songs like the Kipling/ Bellamy Ballad of Minepit Shaw where clog dancers (anything between one and five) became part of the song’s delivery…stealing the show at Cropredy…collaborating with Bellowhead at the BBC Folk Awards. The band were regular nominees at award ceremonies too – Best Live Act in 2009. A steady stream of albums reflected the band’s development, coming in like updates from folk music’s front line.
Never ones to rest on their well-earned laurels, in 2010 The Demon Barbers took things a stage further, adding street dance (and dancers) to the mix. The show that developed from this, Time Gentleman Please (www.tgpdanceshow.co.uk), was a full-fledged stage performance with an elaborate set, a dynamic narrative and a breadth which ranged from the paganism of the Abbots Bromley Horn Dance to the syncopated acrobatics of street dance. At the same time, the band were recording and promoting a new album The Adventures of Captain Ward.
Spectacular…breathtaking…diverse…deeply rooted in the Tradition…totally contemporary…securely rooted…perpetually forward-moving, The Demon Barbers are significant, important, innovative, influential, but most of all they are utterly entertaining.
By Nigel Schofield