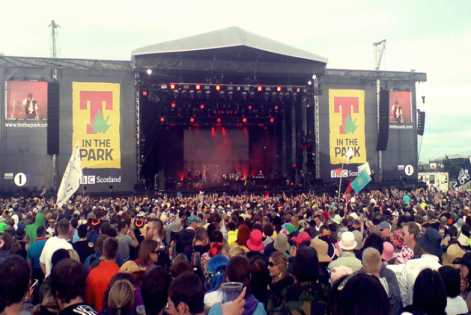 Read all about what the artists had to say about Saturday at T in the Park 2012.

T IN THE PARK 2012 - WHAT THE ARTISTS HAD TO SAY TODAY SATURDAY 7TH JULY
The View: Kieren Webster (bass)
This is our sixth time here as a band but it’s getting on for our 11th, 12th time here altogether. I can remember the first time we came here like it was yesterday. Stereophonics were headlining the Main Stage, and we went and saw The Proclaimers and Paul Weller then Noel Gallagher came on with him – and made my life complete!

The first time we came as a band we were on the T Break Stage. We absolutely stowed the place out, people couldnae get in, it was mental – more people than we’d ever expected. Probably the best gig of my life.

T in the Park has been incredibly important to us as a band. It’s how you judge your career – how far you get up the bill at T in the Park. And it was what got us really into music as well. The fact that we were in Dundee and it was on our doorstep, then you just think: I want to do that. That was sorta the aim: it wasn’t just to be in band, it was, “I wanna play at T in the Park”.

We were on first today on the Main Stage and it was a bit nerve-wracking. But we played Glastonbury first a while ago, so it was kinda similar to that. But I couldn’t get over how much people were there today, and they really went for it. It was raining but there was steam coming off the audience – that’s how you know they’re having a good time. The crowds here are always amazing. It’s the whole Scottishness of it – it just seems to bring out the patriot in people.

We’d love to play the 20th anniversary T – this year doesn’t count, cause we were the Dryburgh Soul Band today. They’re quite similar to The View though – they copied us!

We’re hanging around for the Stone Roses today. Can’t believe I’m gonna get to see them. I think it’s gonna be amazing. I was there when their first album came out. I got it when I was 13 – my mate got me it as a Valentine’s present. I never thought I’d get to see them in my lifetime, it didn’t look like they were ever getting back together, did it?

I think it’ll be an epic, monumental atmosphere like we’ve never seen before. One of the best T in the Park headlines ever, definitely.

Django Django:  Dave Maclean (drummer, producer)
The first time I came here was in 1998 when the Beastie Boys played, Hello Nasty had just come out and every tent was blaring Intergalactic. It was the big tune of the summer. The World Cup was on, Scotland had just been put out by Morocco. But I’d just finished school and it was the best summer of my whole life, seeing the Beasties – I’m a lifelong fan. I’ll always remember that weekend.

Then I came back with The Beta Band two or three times after that. I was sometimes part of their road crew, and I would DJ for them a lot, doing opening slots for them. But nothing will compare to ’98.

Won’t today, your first T appearance?
Of course! Today is quite a big deal for me – Vinny our singer is from Northern Ireland and Jim our bass player is from Leeds, so they’ve not been bought up with the whole T in the Park thing. I don’t think they realise how huge it is in Scotland.

Would you come back for the 20th T?
Definitely. I’d love to play later on in a tent. My dream would be to curate a tent – being a DJ as well, I’m so into other people’s music. So yeah, I would probably like to curate a dance tent more than a bands tent.

Carly Connor
I’m playing the T Break Stage today. It’s my first time and for me it’s the biggest gig I’ve done. But I’ve been coming here for years… Then I had to miss it last year ‘cause I was working… But now I’m getting to play it – amazing.

It is always a party here, although I can never see anything. I’m only five foot one. But being around all these gigs, it definitely helped me as musician.


The Vaccines: Árni Hjörvar (bass), Pete Roberston (drums)
Pete: Playing T in the Park last year made me feel like we were in a proper band. It was real, man, very real. It was one of my favourite gigs that we’ve ever done. Paul Thomson from Franz Ferdinand joined us onstage.

Árni: Scottish crowds are just the best. It’s always one of our favourite destinations to play. It’s always good to come back.

Would you come back for the 20th?
Árni: Definitely. We’re fourth from top on the Main Stage now – anything more than that.
Pete: We’re underneath Jessie J this year; next year we want to be on top of Jessie J!

Árni: There’s a lot of eclectic clashes on the bill, I love it. There’s Two Door Cinema Club then David Guetta; and there’s Childish Gambino and Flux Pavilion.

Are you staying for Stone Roses?
Pete: Definitely. We supported them at the first Heaton Park show. That was pretty amazing.

Árni: It was almost like a spiritual experience. Waking up the day after, I know it sounds like a cliché but it really felt that we’d taken part in something historic.

It was awesome today. Wet, but it’s such a cool thing to have played T in the Park. It’s a teenage dream come true. The stage today was dry and it was amazing. Festivals are just such a good thing – you can relax, you can chill out, it’s all about the energy as opposed to making everything note-perfect. So I really enjoyed it, just getting a bit loose. Me and the band had a great time. I really feel have broken into festivals now. I’ve got my festival legs! And I hope with our songs we brought a bit of sunshine today.

I would love to come back for the 20th anniversary and do it again, that would be wicked. I would hope it would be dark next time I play.

Mull Historical Society: Colin MacIntyre
This is my sixth time playing T in the Park. At the first one I’d just put out my first album, Loss, and it had a dog in a wig on the cover, so I got one made, 15-foot high papièr-maché, and had that on the stage with me too. And I’d just toured with The Strokes, and they were here too. So introducing them to this big dog was one of my best memories – seeing them all sitting inside it. A couple later got married in it.

But that gig, in the King Tut’s Tent, was just the most exciting thing really – I’d never even been to a festival before.

In 2005 I played the Main Stage – sunny day, perfect. That was just a special moment. And this year, I’m got a set pulled from all the albums, and my new one. It’s just gonna feel really exciting.

T in the Park has had a huge impact on the Scottish music scene – but also internationally. My brother-in-law’s a music nut in New York, and every year he wants to come. Everybody in the music industry knows about it – it’s probably, next to Glastonbury, the best festival in Britain. It’s a rite of passage for Scottish kids to come here, but also as a musician it’s just so nice to be part of it. It just feels like a big party. And to be Scottish here always feel extra-special.

Amy Macdonald
I first came to T in the Park I think in 2000 – it was when Travis headlined. This is my third year playing. My first year playing was really exciting – I was just about to release my debut album. And I remember coming here so excited because this was the festival I’d grown up with. And that year I was still camping with my mates! And my first single was out so all of the walls were just covered in posters of me. Performing was just a buzz too - I was in the T Break Stage, and it was rammed. It was the first festival I’d performed and I was just over the moon.

Back in the campsite there was a few people who came into the tent and were like, “you look really like that Amy Macdonald”. But my friend was on it. She was like, “oh, she gets that all the time, wherever we go!”

The second time was 2008, and I performed on the Main Stage and it was a nice day, which was really good, so people were in high spirits. It was really, really great to be back.
I’m in the King Tut’s Tent this year, which I’m slightly daunted by ’cause it’s huge. But it’s always much more vibey in a tent. You get to hear a lot more. So I’m happy we’re in there. I’ll be playing a mixture of old and new songs, and trying to keep the set as upbeat and positive as possible.

T in the Park’s brilliant for everyone really. If you’re a music fan you come here and there’s so much variety. There really is something for everyone. For example, in the King Tut’s Tent, I’m on then Calvin Harris is on. We couldn’t have more different styles of music if we tried! We’re so far apart! That just shows the variety there is. There is genuinely something for everyone.

And in terms of being a performer, T in the Park has always been great at supporting new music, and there’s so many opportunities for unsigned and up-and-coming bands to perform here. I don’t know any other festival that gives such support to new bands. That’s brilliant.

Jake Bugg
You’ve just beaten all of The View at table tennis in the Artists’ Village. How come you’re so good?
My theory is, I’m 18, I left school two years ago, so it’s not long since I played it! This is my first T in the Park, and it was absolutely brilliant to be honest. I wasn’t expecting a crowd like that. I just didn’t expect it. It was incredible.

I knew it was a well-known festival, I’ve seen it on TV. You dream of being here. So to be playing it is incredible really. I couldn’t believe how much support there was today, and it did really feel like a stepping stone for my career. I’m very grateful. It definitely stepped things up for me.

I’ve done a couple of festivals on me own this month, and I’m not gonna lie – a couple were disappointing. And your confidence drops a bit. But T in the Park just boosted it back up.

T in the Park is one year older than you. Will you come back next year, and where will you play?
I’d be happy to play the Transmissions Stage again. But the Main Stage would be incredible to play of course. But yeah, I’d definitely be up for playing it.

Nina Nesbitt
You’re headlining the BBC Introducing Stage…
I feel it’s one of the most important gigs that I’ll play. Especially since it’s in Scotland as well. I’m from Edinburgh, so it’s a home crowd for me. So it’s really exciting, but I am actually a wee bit nervous – and I never get nervous. I’ve never been before. My friends told me that everyone’s really up for it, so I’m hoping that the crowd will singalong and whatnot. It’s a big step for my career.