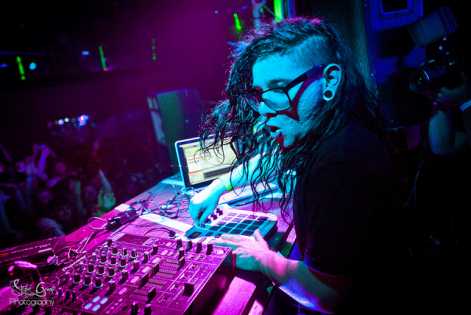 Skrillex has been awarded with the coveted closing slot for our main stage hosted by UKF Bass Culture in a London festival EXCLUSIVE. As is custom with this unstoppable global force, UKF Bass Culture have been busy curating a line-up.

Have you recovered from our last earth shattering announcement? That Triple Grammy Award winner Skrillex will be coming to Clapham Common on Sunday 26th August! His inclusion on this year’s SW4 lineup has resulted in a mass outpouring of emotion, that has served to ramp up excitement to fever pitch levels!
Skrillex has been awarded with the coveted closing slot for our main stage hosted by UKF Bass Culture in a London festival EXCLUSIVE. As is custom with this unstoppable global force, UKF Bass Culture have been busy curating a line-up which follows in the footsteps of their huge sell out Alexandra Palace and O2 Academy Brixton shows. It’s therefore with great pride that the first wave of star studded support acts can now be unleashed.
Skream & Benga; two pioneers synonymous with quality bass music. From the initial embers of dubstep, Skream & Benga have ignited its progression into a now critically acclaimed genre. Hence a ground breaking BBC Radio 1 slot, as well as crafting self-titled events that regularly grace the likes of FABRICLIVE and The Warehouse Project.  Along with regular front man and vocal “go-to” Youngman, this is right up there with SW4’s main attractions.
Ram Records boss Andy C is more than just a DJ, but an instrumental figurehead in the drum & bass movement. Having transfixed mass crowds at the grandiose settings of O2 Academy Brixton and Warehouse Project, Andy brings his audio visual arc outdoors - for what’s set to be one almighty rave. An unrelenting enthusiasm and unquestionable skill means the Clapham stage is sharpened for the ‘Executioner.’
Described by ‘Knowledge’ magazine as “possibly the biggest influence on drum and bass we’ve ever known,” DJ Fresh is a stalwart of the British scene. Having reached #1 in the UK singles chart with ‘Louder’ in 2011 as well as launch his massive live act, this summer sees Fresh go back to his roots at SW4 with two turntables and a mixer. Raw and in the flesh…
Nominated alongside the likes of Skrillex in the BBC Sound of 2012 poll, Flux Pavilion is a red hot talent taking the dubstep world by storm. Best known for his track ‘Bass Cannon’ which made the Radio 1 AList last year and for running Circus Records alongside Doctor P, Flux’s debut at South West Four is long overdue and one of the most eagerly anticipated.
Borgore is taking the world by storm having fronted mammoth sold out US and Australian tours. Working with M.I.A, Bring Me The Horizon, Diplo and Jazzstepp, Borgore’s own imprint ‘Buygore’ underpins his individual take on dubstep. An incisive sound that made his UKF Bass Culture performance at Brixton Academy truly innovative. We’ll be hotly anticipating some trademark Israeli-step from Borgore, bringing his immersive take on all things dub.
Friction AKA ‘The Shogun Warrior’ has been smashing dancehalls worldwide over the last decade. His label Shogun Audio has released highly acclaimed EP’s, LP’s, and Singles from all drum & bass’ heavyweights producers. However other than his impeccable A&R skills, it’s ultimately his lightning quick three deck wizardry that gives Friction the edge. Expect a frenetic fusion of hard, jump up and soulful D&B.
Doctor P is one of the brains behind the infamous Circus Records. Having launched the imprint in 2008 Circus quickly forged a highly distinctive sound of dubstep that quickly captured a global fan base. Responsible for releasing great party sounding tracks like ‘Sweet Shop’ and ‘Superbad’, SW4 are more than pleased to invite him and his partner in crime Flux Pavilion to the Common and get the crowd skanking!
In 2009 DJ Clipz was reincarnated as Redlight and has since helped create a new genre which today receives support from all over the globe. Bassline and party vibes have corrupted sound systems worldwide, thanks to Redlight and his extensive list of collaborations with the likes of Toddla T, Jenna G and Ms.Dynamite. We can’t wait to have Redlight rock the party under the blue skies of SW4.
Finally new kid on the block Dillon Francis, having risen rapidly to receive industry acclaim following his move from LA to Europe. He first appeared on the radar after playing an exclusive Moombahton set at the Boiler Room, receiving the attention of Red Bull Music Academy. Recently he has been touring North America with Nero, plus delving in to other influences like dubstep. An eclectic showcase like no other.
So there you have it. A delectable deviant display of the world’s finest bass music acts, which cements the billing of UKF’s Bass Culture’s presence. SW4 the only place to find this scorching alfresco playground with pupils schooled in dark debauchery, dirty beats and raging riffs. Sunday is no longer the day of rest...