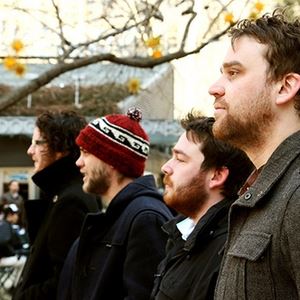 Frightened Rabbit are an indie rock band which formed in 2003 in Glasgow, Scotland. The band currently consists of Scott Hutchison (vocals, guitar), Billy Kennedy (guitar, keyboards), Grant Hutchison (drums, vocals), and Andy Monaghan (guitar, keyboards). The band has released five albums: "Sing the Greys" (2006), "The Midnight Organ Fight" (2008), "The Winter of Mixed Drinks" (2010), "Pedestrian Verse" (2013) and "Painting of a Panic Attack" (2016).
Andy joined the band after the release of Midnight Organ Fight, allowing them to play many songs from the album they would previously have struggled to fill out instrumentally. Gordon joined the band in November 2009 and is a former member of Make Model. He left the band in 2014.
The origins of the band are rooted in 2003, when Scott began playing solo shows under the name Frightened Rabbit, mostly in support of fellow art-schoolers Shitdisco. Recordings were made on a tascam 4-track recorder, with Scott playing all the instruments (some more proficiently than others). Though looser, sparser, and certainly more lo-fi in terms of production values, their early demos still attest to a burgeoning talent with a defined personality and a now familiar penchant for being able to create widely appreciated pop songs.
In 2004 Scott’s brother Grant moved to Glasgow, Scotland, contributing drums to certain recorded tracks, and playing live. Frightened Rabbit became louder and better. They burnt 50 copies of their subsequent demo, and sent some out to labels, resulting in three tracks being hosted on the FatCat MP3/demo website, and marking the beginning of a wonderful relationship. In 2006, Billy joined the band playing primarily second guitar, making Frightened Rabbit in the band’s own words, a wee bit better and louder still. That February they went into The Diving Bell Lounge studio with Glasgow based producer Marcus Mackay to record some songs over the course of a week. The intention was to record a better quality demo, but the resultant recordings ended up as the bands debut LP Sing The Greys, of which 1000 copies were pressed and released that May on home grown label Hits The Fan.
An incredibly accomplished live outfit (seemingly without any effort whatsoever), further live dates followed into 2007, including a brief but successful US jaunt, culminating in a sold-out show at The Mercury Lounge in NYC, before the album was even available in the US. After an intense spate of writing, rehearsing, recording, and remixing, and of course playing more live shows, ‘Sing The Greys’ was remastered by Alan Douches, and re-released in significantly revamped form by FatCat Autumn 2007, along with debut single ‘Be Less Rude’. Rounding off the year with the incredible 'It's Christmas So We'll Stop' single.
In April 2008, the band released their second full length, "The Midnight Organ Fight", a progression in terms of songwriting, sonic depth, and as a fully realised entity. Recorded by Peter Katis (Mercury Rev, Interpol) over the space of two weeks, and mixed over the ensuing fortnight, ‘Midnight Organ Fight’ was conceived and realised in a much shorter time span than its predecessor, with the intention of creating a more coherent, ‘pop’ sounding album. Yet although musically more immediate, vitally, the band have not forsaken the personality or passion of any of their earlier recordings.
In July 2008, a live rendition of ‘Midnight Organ Fight’ was recorded in Glasgow, and mixed by Mice Parade’s Adam Pierce, entitled 'Liver! Lung! Fr!' The stripped-down instrumentation brings singer Scott Hutchison’s vocal delivery - now wrenching, now soaring - to the fore, showcasing the emotive lyrics and memorable melodies that have earned the band their passionate following. This album was released in the United States in late 2008, and a world release date to followed in March 2009.
The band's third album "The Winter of Mixed Drinks" was released in early 2010.