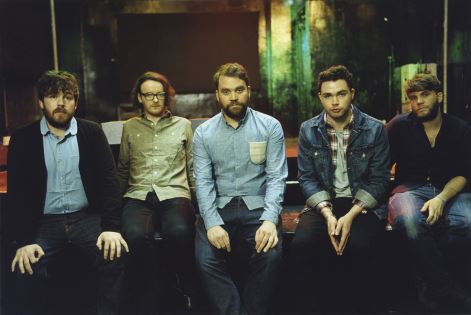 Hard Rock International is pleased to announce their second featured Artist of the Month, and the first British addition to the programme, Scottish indie-rock band Frightened Rabbit.

As part of the Hard Rock brand’s ongoing initiative, the Artist of the Month programme provides artists with a medium to share their latest video releases. Throughout the month of September, the band’s hit song “The Woodpile,” will be highlighted on Hard Rock’s in-cafe video system in Hard Rock Cafes all over the world, including Hard Rock London, Hard Rock Manchester, Hard Rock Edinburgh and come November, the new Hard Rock Cafe in Glasgow, where a guitar played during the band’s US tour, and a set list from this year’s T in The Park festival will be on display as part of the memorabilia collection in the Cafe.
"Music is meant to be shared,” said lead vocalist and guitarist of Frightened Rabbit, Scott Hutchison.  “That’s why we started Frightened Rabbit. We are honored to have the opportunity to connect with new fans around the world inside Hard Rock Cafes"
A collection of Frightened Rabbit’s videos, including the hit song, “The Woodpile” will receive play more than 1,000 times a day on 2,500 screens in Hard Rock’s 138 cafe locations in 54 countries around the globe. In addition, Hard Rock will also include Frightened Rabbit’s complete video collection in its regular video rotation moving forward.
“We’ve long been fans of Frightened Rabbit and are thrilled to be able to introduce them to our Hard Rock family,” said James Buell, Director of Music and Marketing, Hard Rock International. “Their music and ethos closely align with the values of Hard Rock and our founders.  Engaging them with our guests in this fashion is an exciting proposition.”
Frightened Rabbit’s brand new four-track EP, “The Woodpile EP” is out now.  The band will be supporting The National on their upcoming US tour throughout September and will headline a string of UK shows in November. The run of UK dates will kick off in Newcastle on 5 November before visiting Manchester, Bristol, Birmingham, London’s Brixton Academy and then closing on 16 November in Scotland.
Committed to supporting music and musicians around the globe, Hard Rock International hosted more than 20,000 live music events worldwide in 2012.  The brand continues its dedication to support artists through the Artist of the Month programme and each month will hand select one talented artist to be showcased on the brand’s video system.

Published on 12 September 2013 by Wayne Feltham