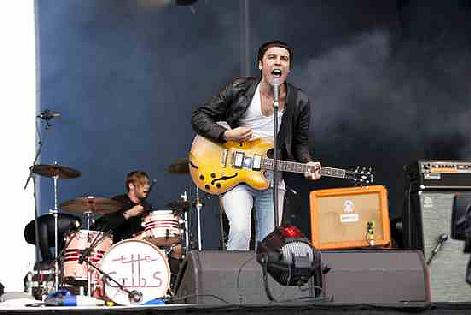 With a rainy forcast ahead we arrived at Clapham Common and followed the hurd towards Get Loaded in the Park festival.
Passes sorted and a damp schedule later we headed straight for the opening act on the main stage, Darwin Deez. Having not heard many of there tracks I didn't know what to expect, before I knew it they were on stage entertaining the crowd with syndicate dance moves over funky music which I have to say was hilarious  and not the usual start to a festival act. Well into the set and with the surprised small turn out watching they played the smash hit ‘Radar Detector’ which went down a storm!
After checking out what's on offer in the 2 bars and few food stalls on offer it was time to head in for the next set. No rushing needed as the site is small with a main stage and two smaller tented arenas closely situated near each other. Los compesinos appeared on stage, the crowd was slowly growing, the rain was slowly pouring and through the sea of umbrellas that gathered you could just about make out the stage. The music was uplifting and kept a good festival vibe going for the next big new act - Patrick wolf!
You knew by the rush of cameras and people gathering in front of the stage that something was going to go down. The set had involved evrything from a sax, harp, violins and more. Patrick was a real crowd pleaser, as he jumped of stage and come up to the crowd you started to feel the atmosphere was improving as the crowd went mad for it. Personally I didn't know much of Patrick wolf but I was quite blown away with his captivating sound and appearance!
With damp clothes and more rain we headed over to the Gigwise Arena to check out a few of the smaller bands. Both tents were pretty packed out, whether it was the acts or the fact that it was shelter from the heavens, I think a bit of both!  We were entertained by Babeshadow playing their buoyant clean picked sound compared to Mystery Jets and Vampire Weekend it was nice to tap your feet to and bop your head to.
Rocking out over on the main stage British Sea Power had come on stage. The indie rock band from Brighton played their epic guitar sound with a twist that is often compared to greats like The Cure and Joy Division. It was beginning to feel more like a festival as they rocked out the main stage to a very pleased crowd.
Over in the Last.FM Arena you had artists like Beans on Toast performing his almost story telling sound over a lightly played acoustic guitar. Johnny Flynn a particular favourite of mine headlined this arena and I was blown away by his soft folk style and voice that you just couldn’t turn away from. Lit up by an almost mood lighting glow it was a great privilege to see such talent.
After many a beverage and a 2 Pac-a-mac’s later the Noisettes were on stage. Evolving out of a display of feathers lead singer Shingai Shoniwa stepped out to an excited screaming crowd as they played hit after hit like ‘Don’t Upset the Rhythm’,  ‘Never Forget You’ and more of their indie rock sound with a twist of rhythm and soul. A highlight for most of the crowd as lead singer Shingai paraded across the stage, climbing on speakers and really pushing her  electric energy into the crowd. A great one to dance to!
Not moving from this spot because cult band The Cribs was up next. One I had been waiting for, it was almost a bit strange to have such a band playing at this festival but it worked really well. They crowd had grown, quite possibly just to see these. It was as energetic as always as they bought their indie rock sound to Clapham Common, they could have been the headliners for me.
With only a couple of fairground rides and not much in the way of stalls I think it was made worse by the rain, as it could have been a fairly good festival at a reasonable price with some great artists in this great local location for Londoners.
Razorlight headlined the event, to be honest by this time I think a lot of people had enough of the rain and mud and some resulted to painting each other head to toe in it. They played their usual hits which everyone knows and loves, always good to hear but I can’t help but get the feeling they didn’t want to be there, as they finished 10 minutes early and without any encore.
In the end I have to say I did enjoy the music that was there, I just think the festival itself could do with a little expansion with a bit more around the site entertainment. I guess that would mean a price increase though, you can’t have it all!