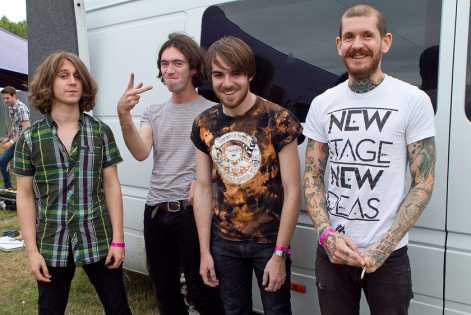 Pulled Apart By Horses will be showcasing their incendiary live show across Dot To Dot’s three home cities this year. With their second album, Tough Love cementing their reputation as one of the UKs most essential bands

First wave of acts announced for this year's Dot to Dot Festival which takes place across Bristol (June 2nd), Nottingham (June 3rd) and Manchester (June 4th) on the Diamond Jubilee Bank Holiday weekend. The Drums, Pulled Apart By Horses, Willy Mason, Dog Is Dead, Summer Camp and Lucy Rose are some of the first names to be announced. Tickets are on sale now priced just £20.
Bristol: Saturday 2nd June 2012
Nottingham: Sunday 3rd June 2012
Manchester: Monday 4th June 2012
•    ‘A forest of new stars, old favourites and plenty of mischief at one of the UK’s fastest rising festivals’ - NME
•    ‘With a stunning bill and venues within yards of one another we’ll leave you to join the dots.’ - Clash

Dot To Dot, the UKs only tri-city traveling festival returns for 2012 announcing its first salvo of must-see artists. Renowned in its seven year history for offering guaranteed crowd-pleasing bands alongside the first live glimpses of some of today’s biggest acts, which have included double Brits winner Ed Sheeran, The xx, Florence & The Machine, The Naked and Famous, Friendly Fires, Laura Marling and Mumford & Sons, this year’s multi-venue event will take place across the Diamond Jubilee bank holiday weekend, visiting Bristol on June 2nd, Nottingham on June 3rd, making its triumphant finale in Manchester on June 4th.
Dot To Dot Organiser Anton Lockwood commented: “More than ever Dot To Dot 2012 will see a great line up of exciting new music alongside the hottest live acts at the moment. Our first announcement of indie titans The Drums and fast rising rockers Pulled Apart by Horses sets the tone for Bristol, Nottingham and Manchester to each have a great day of fresh and exciting music.”
Kicking off this year’s line-up are one of the biggest success stories of recent years, The Drums. Previous recipients of the NME’s coveted Philip Hall Radar Award, their eponymous debut album and follow up, Portamento, have singled them out as one of the most acclaimed bands around, making them a sure-fire hit for Dot To Dot 2012. Adding a fiery edge to proceedings, co-headliners Pulled Apart By Horses will be showcasing their incendiary live show across Dot To Dot’s three home cities this year. With their second album, Tough Love cementing their reputation as one of the UKs most essential bands, the Leeds post-hardcore four-piece have been described by the Observer as ‘the best live band in Britain’ so they’re certain to captivate the crowds.
Other acts set to traverse the triumvirate of cities include timeless folkster Willy Mason, whose recent hook up with Lianne La Havas opened him up to a whole new audience, Nottingham art-pop quintet and fast-rising stars, Dog Is Dead, bliss-drenched duo Summer Camp and Bombay Bicycle Club collaborator Lucy Rose. And there are still many more acts to be announced in the coming months.
With an illustrious musical heritage that has given thousands of music fans the opportunity to catch future stadium fillers and the most exciting acts around in intimate surrounds, Dot To Dot’s track record for musical discovery is second to none. And what’s more tickets, which give you access to the entire bill across all the venues are incredible value for money, currently priced at just £20 per day, so what are you waiting for?

Published on 28 February 2012 by Ben Robinson