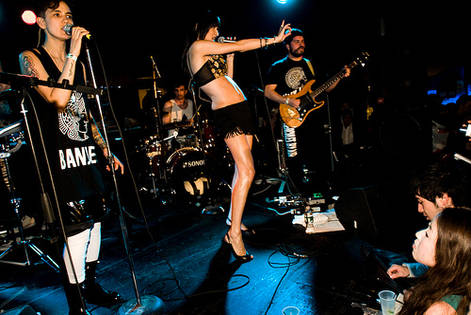 Standon Callings 2011 bill is shaping up to reaffirm this accolade. Just added to the monstrous list of must-see artists are.......

Experimental disco outfit, Hercules and Love Affair, are set to top the bill on the Twisted Licks Stage on Saturday night, joining Main Stage headliners Spiritualized and Battles in complementing this years Gods & Monsters theme. Elsewhere, Howard Marks is headlining the Under Covers Literary Lounge which includes, along with readings and comedy, a Literary Death Match contest and the inaugural Standon Callings Bad Sex Awards.

Standon Calling festival is known for much more than its inspiring musical line-up and promises more themed entertainment than ever before. Heavenly (or heathenly) offerings include a Garden of Healing chill-out area with massages and more; a Monster Safari where the cabin crew will serve up improvised comedy and free shots of tequila; and a Hellhound Show (think dog show, but hosted by Lucifer).

Theres a Where the Wild Things Are play area for kids and a Zombie Marketplace full of shops and stalls. Pagan Pilates is on offer to stretch out over-danced limbs, while the Goddess Grooming Parlour can restore festival-frazzled guests to their full glory. Finally, alongside an excellent range of eateries, East Londons Rebel Dining Society is offering festival-goers the chance to dine like deities with a Feast of the Gods where people can enjoy a gourmet banquet of biblical proportions!

"Im really excited about all the new entertainment we have lined up this year", says Festival Director Graham MacVoy. "Weve never had so many new areas before and moving around the site is going to be a real adventure. One moment you can enter a space hopper race, the next you can have a massage. Besides the three main stages and on-site nightclub weve also got a rolling stage travelling around the site offering interactive entertainment".