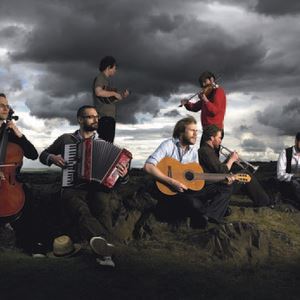 There are two different bands with this name:
1) Broken Records (Edinburgh)
Broken Records formed in 2007 in Edinburgh, Scotland. They use their different musical backgrounds and a wide variety of instrumentation to compliment the eclectic sound they create.
Their 2007 self released debut ‘gig’ EP created a genuine music industry buzz around the band. Drowned in Sound said of the release, “This is magical, engrossing and wholly enveloping, genuinely and excitingly bursting with commercial potential.” They refined their sound throughout 2007 and 2008 with numerous gigs throughout Scotland, including support slots with Idlewild, Sons & Daughters and Editors.
They released their highly acclaimed debut 7" single, “If the News Makes You Sad Don't Watch It”, on London based indie label Young Turks in April 2008. This received plaudits from such varied publications as NME, The Guardian, Drowned in Sound, The Sun and The Times. Radio 1’s Steve Lamacq made it his single of the week and Huw Stephens invited them to do a session for Radio 1 at Maida Vale. Limited releases of singles “Slow Parade” and “Lies” led to a scramble of album deal offers, with the band excited to sign to the prestigious 4AD label. They rounded off the year by playing at the Edinburgh Hogmanay Street Party and being tipped for 2009 in Q magazine, The Times and News Of The World amongst others.
In January 2009 they recorded their debut album, “Until The Earth Begins To Part” at Monnow Valley Studio in Monmouth with producer Ian Caple (Tricky, Tindersticks, Yann Tiersen). The album was released on 1st June 2009 to wide praise, and live performances in support of it garnered 5-star reviews in both The Guardian and The Times. Summer saw them perform at many UK and European festivals including Glastonbury, T in the Park, Haldern Pop Festival and a main-stage slot at Latitude. The successful summer culminated in an invitation to support The National at their Royal Festival Hall show in London, followed by their own sold-out show at The Queens Hall in Edinburgh.
Broken Records spent the Autumn touring Europe and the UK as well as releasing the “Out On The Water” EP in November. Early 2010 found them making their well received live debut in the US at the SXSW Festival in Austin, Texas. Their music was also featured in episodes of the TV dramas “Skins” and “Lost”, and once again appeared as support to The National on part of their European ‘High Violet’ LP tour in July. In August the band also announced the move from being a seven-piece band to a six-piece for with the departure of Arne and Gill, and the introduction of new member, Craig Ross taking up bass and guitar duties.
Oct 2010 saw the UK/EU release of their second album, “Let Me Come Home” along with single “A Darkness Rises Up” which was recorded in Glasgow with producer Tony Doogan (Mogwai, Delgados, Belle & Sebastian,). Once again the album received great reviews across press, including an 8/10 in NME and a B playlist on BBC 6 Music for the single amongst others. This was backed by a co-headline European tour alongside US band Freelance Whales and the single release of “You Know You’re Not Dead”.
In March 2011 they embarked on their debut US headline tour to coincide with the North American release of "Let Me Come Home". As well as performing several sold-out shows they recorded radio sessions for WNYC in New York, The World Cafe in Philadelphia, and Morning Becomes Eclectic on KCRW in LA. The third single "The Motorcycle Boy Reigns" will be released on May 16th and the band will be playing several festivals across Europe throughout the summer.
http://www.brokenrecordsband.com
2) Broken Records (Sweden)
Story of the band:
In the autumn of 2003 Erik and Johan started to fumble some songs together in Johan´s narrow apartment in Majorna, Gothenburg. Low-key, lo-fi acoustic music with close harmony and a richness of melody came out of these experiments.
The technical incompetent duo borrowed a portabel digital studio and managed, somehow, during winter and spring 2004, to record around thirty songs. Some of these recordings were spread among friends and family and resulted in an appreciated debut live performance at a student´s pub in april.
Henrik, with his white Fender Stratocaster, came along in the autumn of 2004. There were now three songwriters in the band, with a broad taste in music, and the sound was widened with a more “mature” feel to it.
Plenty of rehearsals, a handful of live performances and some easy-to-forget home recordings later, contact was made with Daniel Y. During a weekend in july 2005, in a small cellar studio in Guldheden (Goldmoor), Gothenburg, he recorded three songs with the trio. They ended up on Broken Records first official CD-R: “The Goldmoor Sessions/The Livingroom Sessions” 2006.
Three
(October 28 & November 18-19, 2006)
Three is a magic number, they say. And during three days in October & November 2006 so it seemed: The three members of Broken Records headed for Music a Matic studios at Tredje (3rd) Långgatan in Gothenburg to record three songs. With Thomas Andrén's spot-on ideas and delicate hands a richer and warmer sound was born. In organic and earthy Nearby Hills the band deals with the members obsession with kite flying. Anne - a song frequent on the band's live set list - finally gets all dressed up in full costume. Titte Carlsson joins the band on backing vocals on Desperado; a song starting in old time Broken Records style but finishing off the Three-sessions in grand style.
http://www.brokenrecords.se
http://www.myspace.com/brokenrecordsgbg