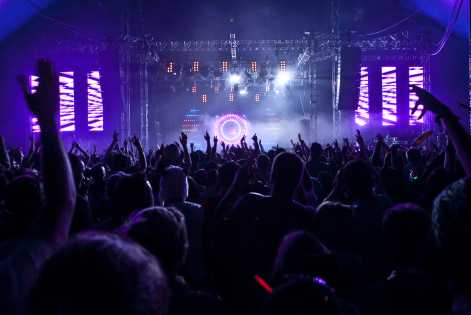 From hearing one of his tracks for the first time inside a club in 2003 to headlining Glastonbury in 2010, Sub Focus’ rise through the ranks of underground jungle to become a major player in electronic music has been nothing short of spectacular. Initially known for air-punching, dancefloor dismantling drum & bass, Sub Focus has now become synonymous with music that draws from all corners of the electronic landscape, and has come to epitomise the ‘anything goes’ mantra of today’s flourishing dance scene.
UKF Bass Culture LIVE will witness Sub Focus play his biggest ever headline London performance. Here he will showcase a brand new live show and preview tracks from his sophomore album due out later in the year. With an acclaimed and visceral live production that has wowed festival goers and music fans the world over for the past two years, this is set to be an unmisssable night for all fans of this incredible artist.
Following November’s devastating debut at Brixton’s Electric, Andy C brings his mindblowing Alive production back to South West London. By unleashing Alive at one of London’s largest venues, thousands will be given the opportunity to take part in this cutting edge dose of carnage. One of the most spectacular shows in electronic music, do not miss this chance to witness The Executioner at his untouchable best.
The sharp-teethed monster returns to UKF Bass Culture as Feed Me looks to replicate the anarchy of his Alexandra Palace performance. Unquestionably one of the best sets of the night, his hard-hitting electro and mindblowing production took the roof off. The Academy stage plays host to this superb artist for the very first time in what will be another sensational performance.
As one of the most energetic and talented hip hop outfits to ever emerge from the UK, Foreign Beggars are another hugely popular act to join us at UKF Bass Culture LIVE. Managers of the Dented Records imprint, the Beggars have played alongside some of the greatest legends in the game including Snoop Dogg, Public Enemy and Wu Tang Clan.

Published on 16 December 2011 by Ben Robinson