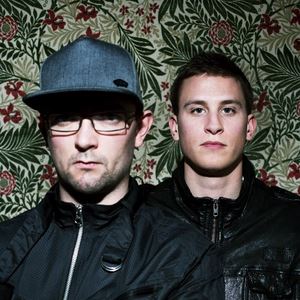 There is more than one band / artist known as Loadstar.
1. Speed metal band from Napoles, Italy, formed in 1985.
2. The group name for drum and bass producers Xample & Lomax.
At the age Bristol based Gavin Harris (aka Xample) and Nick Hill (aka Lomax) got into music, the electronic scene was already thriving. After growing up to the sound of The Human League, Quincy Jones and Prince, they both followed with passion the rise to fame of The Prodigy, The Chemical Brothers and Daft Punk, yet their sound of choice was drum and bass, inspired by local hero Roni Size, LTJ Bukem’s atmospheric grooves, Dillinja’s brutal rhythms, Ed Rush and Optical’s cyber funk and John B’s dramatic soundscapes.
Xample’s first ambition was to become a DJ and after relocating in Liverpool he teamed up with local DJs and Producers Sol and Futurebound and made his name DJing in some of the best nights around Liverpool, Leeds and Manchester. When he decided to try his hand at producing, his early tracks managed to get released on Hardleaders, Ray Keith’s Penny Black and L Plates. Back in Bristol, Xample set up a studio and got to work on shaping up his own raw, powerful sound. Soon, Ram Records noticed him and offered him a deal with their Frequency Offshoot for a couple of 12s, before graduating to Ram with the track ‘Heaven and Hell’, included on the Dimensions 3 EP and on Andy C’s Nightlife 3 mix in 2008.
Lomax began his musical career as the original member of cult drum and bass collective HoldTight, with releases on Industry, Renegade and React, and some high profile remixes for Cyantific on Hospital Records, UK Hip Hop’s finest Rodney P and Skitz and Candi Staton’s dance classic ‘You’ve Got The Love’. They enjoyed the flattering accolade of ‘Dirty Habits’ and ‘925’ being licensed for Andy C’s prestigious Nightlife project, and J Majik Fabric mix. Lomax went solo after the crew’s debut album release to pursue his own, more minimal sound. Following several releases on Critical and Bingo amongst others, and ‘Artisan’ for Bounce Records, hailed as one of the tunes of 2007, Lomax signed exclusively to Ram Records. His first release for the label, the ‘Faith Massive’ EP in May 2009 went straight to number 1 in the dance charts.
Xample and Lomax started working together in 2007. The combination of Xample’s raw dancefloor sound and Lomax experimental edge proved instantly lethal. Their heavily exposed debut ‘Lowdown/The Latter’ was released on Ram Records in spring 2007 and followed by the equally impressive ‘Contra/Keep Their Head Ringing’.
2010 is a pivotal year for Xample and Lomax. May saw the release of the ‘shamefully, powerfully, grippingly addictive’ (IDJ) ‘Remember’, backed by the lethal ‘Rushin’ Dragon’, showcasing the promising depth and variety of their joint talent.
After developing into a formidable production team, with a handful of singles getting them into A listers status, it is time to work on a debut album, and comfort their partnership by choosing a specific name. So, for the release of the awesome ‘Link To The Past’ (‘A huge alien mammoth’ – DJ mag), they will be known as Loadstar.
Loadstar will embark on an autumn DJ tour, joined by MC Texas and singer Ikay, to showcase their past, present and future anthems that will feature on their debut LP out next spring. Firmly set into the exiting, boundaries-breaking current scene, it promises to propel them into the same league as Ram stablemates Sub Focus and Chase and Status.