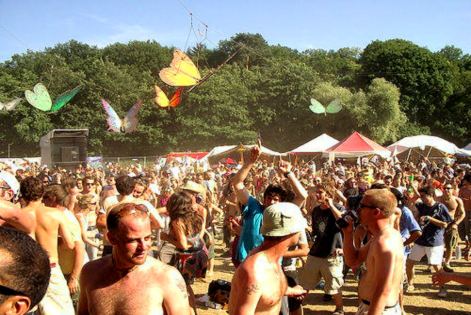 With some of the best décor, performance, sound and visual installations in the country Glade Festival is well and truly back

The UK’s most forward-thinking electronic music event Glade Festival returns for 2011, revolutionised and stripped back to it’s shiny roots. Taking place at a brand new, as yet undisclosed, venue this year’s festival will feature a selection of the biggest names in cutting-edge electronic music. This years event sees the festival scaled down in terms numbers (strictly limited to 5000 capacity) BUT will feature the same attention to detail which saw the event voted Best Dance Festival 2008 at the UK Festival Awards.

The line up has been announced with a massive mix of international DJs and live music, this years headliners consist of Trentemoller (Full live band), Drumcode, Global Communication, Andrew Weatherhall, Photek and more. Check out the line up so far here.

Headlining this year’s festival is one of the most celebrated electronic artists in the world Trentemøller. Having built his reputation releasing on labels such as Audiomatique, Poker Flat and Naked, as well as having hits with remixes of Djuma Soundsystem, Yoshitmoto, Röyksopp and many more following the launch of his debut album The Last Resort, Anders Trentemøller’s truly incredible live show went otrentn to conquer the world and we’re really excited to welcome him to Glade where he will be bringing his full live band and stage show.

Saturday night is all about techno and we’ve handed the keys over to Drumcode Records to bring us a monster line up featuring label boss Adam Beyer, Scottish techno legends SLAM, Paul Rich live and Joseph Capriati.

Global Communication AKA Tom Middleton and Mark Pritchard can be cited as one of the UK’s most prolific production duos. With more production aliases than any other electronic artist (…probably) the South-West based duo form GC in 1991 after Tom’s work with Aphex Twin and Mark enjoyed chart success with a dodgy rave-rework of kids TV show ‘Rhubarb & Custard’ Their debut album 76:14 is one of the most acclaimed ambient albums from the early 90’s. Having taken a break briefly in 1997 to focus on a plethora of other projects the duo have reformed and back to deliver what looks set to be one of the highlights of the weekend, starting off with ambient soundscapes building up to dancefloor beats, closing the Glade Stage on Sunday evening.