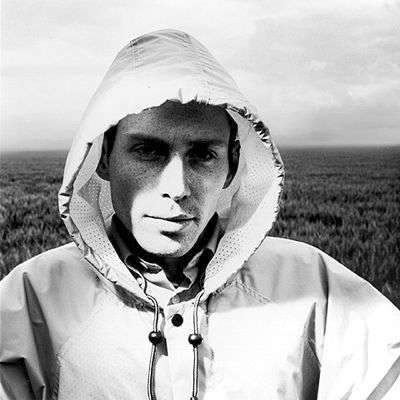 A fixture on the UK jungle scene since the early nineties, Photek a.k.a. Rupert Parkes is best known for his role in developing the "intelligent" drum & bass genre. Over the course of his career as Photek, Parkes has developed a sound that is simultaneously individual, innovative and accessible, earning him much respect and popularity amongst critics and music fans alike. The strength of the sound finds foundation in Photek's incredibly detailed drum programming, which is then augmented by his sophisticated sense for combining abstract sounds with jazz and classic techno influences.
Recently Parkes has been more and more active in producing music for film, having worked on a number of scoring projects for upcoming features from his new home base in Los Angeles (most notably for The Animatrix and The Italian Job). His dedication to film scoring is evident, and his perfectionist attention to detail and tireless work ethic are quickly leading him to success in Hollywood.
(2) Though Goldie became the first superstar of jungle, the recordings of Rupert Parkes -- as Code of Practice, Aquarius, Studio Pressure, the Truper, and Sentinel, but most famously as Photek -- made him an easy pick for the style's most artistic and intelligent producer. Working his way through street-level hardstep (on early productions for Certificate 18 and Street Beats) and airy, sub-aquatic "dolphin" tunes for L.T.J Bukem's Good Looking label, Parkes finally arrived at a sound that pushed the bounds of drum'n'bass from the dancefloor into the realm of breakbeat head space. His incredibly intricate rhythm programming -- often requiring weeks of computer preparation -- and the unmissable aura of paranoid menace on recordings such as "The Hidden Camera" and "UFO" exerted quite an influence on the return of dark-style drum'n'bass during the late '90s.
As a teenager, Parkes listened to electro, techno, and hip-hop as well as the more free-form side of jazz and fusion. Thanks to a sampler bought with a £2000 loan from the Trust of the Prince of Wales, he began producing tracks and first appeared on Paul Solomon's Certificate 18 Records with singles as Studio Pressure. He also recorded for Basement (as Sentinel) and Street Beats (the Truper) before initiating a series of 12" singles for his own Photek Records, which gave him credentials and led to releases on Goldie's Metalheadz label and L.T.J. Bukem's Good Looking, as well as a remix of the Therapy? single "Loose."
After Parkes had released more than 80 tracks of drum'n'bass on half-a-dozen labels, he was approached by Virgin and signed to a five-album deal with the label's Science imprint (provided he was allowed to continue recording for other independent labels as well). Parkes' first release on Science was the Hidden Camera EP, which appeared in May 1996. The second Science single Ni-Ten-Ichi-Ryu displayed an increasing interest in applying the lessons of martial arts to his programming (the title is Japanese for "two swords, one technique"). Virgin compiled the latter two releases on 1997's Risc vs. Reward, then released the debut Photek album Modus Operandi in September 1997. Much-hyped though little-praised, the album was followed by 1998's Form & Function, a compilation including several original Photek Records tracks plus remixes and new tracks. During the next two years, Parkes focused on his new Photek Productions label, and finally released a second LP, Solaris, in 2000. A couple exceptions aside, the album departed from drum'n'bass and was deeply indebted to early Chicago house. Heavyweight house vocalist Robert Owens was featured on two tracks.
Throughout the next decade, Parkes was sporadically active, at least when it came to 12" releases. He became involved with composing music for films and assisted Trent Reznor with some programming on Nine Inch Nails' 2005 album With Teeth. Some of his 2000-2007 output was compiled for Form & Function, Vol. 2 (Sanctuary, 2007). Across 2011 and 2012, he was prolific once more, with several singles and EPs for Photek Productions, a collaboration with dubstep producer Pinch, and an installment in the !K7 label's long-running DJ-Kicks series. Featuring several of his own tracks, Parkes' mix focused on contemporary techno, downtempo, and atmospheric dubstep, with no drum'n'bass whatsoever. ~ John Bush & Andy Kellman, Rovi