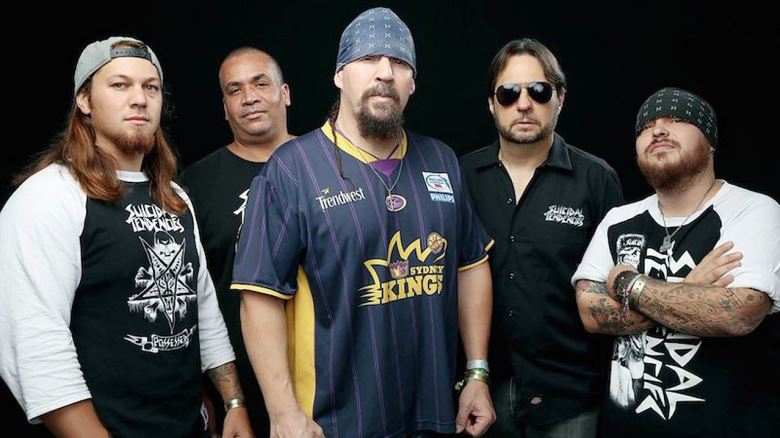 Steel Panther, a Day to Remember, the Dillinger Escape Plan, Suicidal Tendencies, in Flames and More Join the World’s Biggest and Best Rock and Metal Event

Download Festival, the world’s premier rock and metal event has made an unprecedented announcement, adding over forty of the world’s biggest bands to an unparalled bill including Steel Panther, A Day To Remember, The Dillinger Escape Plan, Suicidal Tendencies and In Flames. Download Festival takes place on 9 - 11 June 2017 at the spiritual home of rock in Donington Park, Leicestershire.

Download Festival’s Andy Copping said: “We’re committed to delivering the best in rock and metal year on year for the Download fans, and this year is no exception. We’re thrilled to have core acts in the likes of Steel Panther, A Day To Remember, Dillinger Escape Plan, The Cadillac Three, Suicidal Tendencies and more, along with some of the most exciting new talent in the game such as Creeper, Red Sun Rising and Hacktivist. Right through from The Dogtooth Stage, all the way to the top, fans are guaranteed to witness an incredible weekend of music from their trusted favourites, and discover new favourite bands of the future.”

Download Festival’s Dave Bradley said: “We’re stoked to represent the many facets of rock in this announcement. We’ve always been invested in booking bands across every stage that have the grit and determination to step up and be headliners of the future. The Avalanche Stage is really exciting this year, promising three days of unapologetic rock, pop punk and metal from the likes of State Champs, As It Is, Moose Blood and Trash Boat. Festival goers better get in that tent early - we’ve got face melting riffs and one hell of a weekend in store.”

Glam superstars Steel Panther will be hitting the Main Stage with their tongues firmly in cheek. The crew renowned for their debaucherous live shows are back to melt faces and hearts once more.

Steel Panther frontman Michael Starr said: “I'm so happy to be back at Download Festival. Download Festival 2009 was our very first show in the UK, so this Festival holds a special place in my heart! Hell yea.”

Following a sold-out Wembley show last week, arena smashers A Day To Remember will be bringing the party to Donington, buoyed by the triumphant success of their new album Bad Vibrations. Following the announcement of their retirement, pioneers of their genre The Dillinger Escape Plan will be making their last ever UK festival appearance at Download this year. The genre defining legends have been pushing musical boundaries and demolishing stages with assured anarchy for 20 years – this is a set not to be missed.

The fathers of cross-over thrash, Suicidal Tendencies have been leading the charge and inciting mosh pits for over 30 years; the hardcore hall of famers are back to tear Download apart this summer. Rising punk stars Creeper will capitalise on a year of huge successes and deliver the biggest horror-punk set of their lives as they take to the Download Festival Main Stage. Joining them are Baroness, who rightfully earned themselves a Grammy nomination for ‘Best Metal Performance’ with their intensely progressive heavy metal masterpiece ‘Shock Me’; and the enigmatic and ever-evolving Anathema, who are ready to dish out their lithe and muscular alternative metal to the Download Festival crowd. Legendary forefathers of melodic death-metal outfit In Flames also join the bill; having toured the planet countless times and influencing many of today's biggest metal acts.

Wednesday 13 – also known as legend Joseph Poole of Murderdolls fame – is returning for the first time in 12 years for all the zombie themed, horror-punk that fans can handle. Scottish pirate metallers Alestorm will be regaling Download fans with tales of unforgettable swashbuckling adventures, whilst it’ll be riffs aplenty as Nordic hard rockers Kvelertak pack a truly head banging worthy punch following the release of last year’s anthemic album Nattesferd. The Charm The Fury are one of the brightest prospects in metalcore, and are set to take the crowd on a ride of crushingly heavy breakdowns and high-energy monstrous anthems this June.

Australian metalcore mob Northlane have instilled themselves as one of the most exciting acts to emerge in the genre, rapidly growing their international fanbase with their groove laden technical take on the scene. Straight out of Ohio; metalcore legends The Devil Wears Prada return to Download with their incomparable powerful sound - they’re set for one hell of an exciting live show. Joining them will be grime-metal crew Hacktvist who are set to rage Download with their fiery, genre-melding anthems.

As It Is are one of the hottest current names in pop punk. Led by Patty Walters, the Brighton four-piece’s popularity has sky rocketed after touring with the previously announced Sum 41 and Sleeping With Sirens. State Champs are ready to rock Donington Park with their energetic and infectious party vibes, whilst Trash Boat will provide amped-up fast paced punk bangers and posi jumps galore. Emo revivalists Moose Blood will deliver their unapologetic heartfelt hooks for the Avalanche Stage masses, whilst pro wrestler Mark Andrew will be making his Download musical debut in his pop punk outfit Junior.

London activists The King Blues are officially back and will be sending the Download crowd wild with anthems like ‘I Got Love’. Swedish alt-rock act Normandie are destined to fill arenas in the future having impressed with their soaring and hugely ambitious sound. Post-hardcore stalwarts Touché Amore have been capturing the hearts and minds of the rock world over the last few years with a leaden mix of serrated guitar leads and frontman Jeremy Bolm’s impassioned screams. They join the incomparable line up, alongside the uplifting and hard-hitting Southern rock sound of The Cadillac Three, South London’s alternative rockers Wallflower, and Grove Street Families; the serious thrash crossover unit who’ll be bringing hardcore hooks and buckets of bounce to Donington Park.

Everyone’s favourite rock chanteuses, The Lounge Kittens are making their grand Download return, bringing with them their unique jazzy spin on metal’s biggest hits.Aaron Buchanan & The Cult Classics will blow the lid off Download Festival in style, featuring the show-stopping vocals of the former Heaven’s Basement frontman in his new outfit. Leeds three piece Dinosaur Pile-Up are sure to shake things up with their alternative riffs and grunge tinged melodies, whilst Bristol up-and-comers IDLES are set to unleash a torrent of brash and belligerent post-punk on their debut Download appearance.

The Contortionist will deliver an explosive set with expert precision and intensity, igniting a djent spark sure send the Download crowd wild. With a raucous mix of death and doom metal, Venom Prison’s righteous set will put them up there with the Download Festival greats, as will the effervescent rock ‘n’ roll of Fizzy Blood and the unique black metal sounds of She Must Burn.

London-based rock ’n’ roll four-piece M O S E S will have fans revved up with their boisterous and visceral sound. Casey are a tour de force of experimental post-hardcore who’ll be taking to the Download stage for the first time, as will the chunky riffs and stadium-sized choruses of Stone Broken and the London based group who are quickly establishing themselves as one of the hottest modern metal band of the moment; Brutai.

The LaFontaines will bring their socially-aware hip-hop infused rock to Donington, whilst melodic hardcore sounds will come from Cardiff’s Holding Absence and the fist-pounding circle-pit-ready metal of Dead Label. Get ready for a masterclass in head banging anthems from New Zealand hard rock behemoths Like A Storm. They’ll be joined by their fellow countrymen Devilskin, led by the incredible Jennie Skulander.

Lincoln mob Blood Youth, are ready to bring a set of high-octane and visceral melodic hardcore, alongside San Francisco quartet I The Mighty, who are guaranteed to impress with their blend of pop and piercing post hardcore. Hotly tipped as ‘ones-to-watch’, Emo punks Dead! are ready to show Donington what they’re made of, as areSwedish power-metal machine Sabaton and the grunge-tinged alt rock sounds of Red Sun Rising.

Download Festival is the home of rock music and takes place on the sacred grounds of Donington Park, which have been associated with rock since the 80s. The festival attracts icons of rock and metal, plus some of the best and hottest new acts in the world. AC/DC, KISS, Metallica, Black Sabbath, Guns N’ Roses, Rage Against The Machine, Slipknot, Linkin Park and many more have all headlined its Main Stage.

Published on 01 February 2017 by Ben Robinson