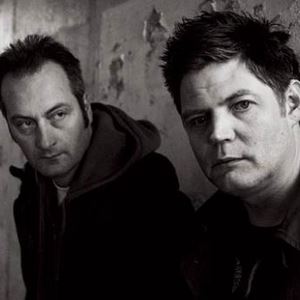 Slam is a name of at least four artists:
[1] A Scotland-based electronica duo.
[2] A Swedish punk rock band.
[3] A USA hardcore punk band.
[4] A German eurodance group.
[5] A Malaysian slow rock group.
[1] A producer/DJ electronica duo of Stuart McMillan and Orde Meikle. As DJs, they are synonymous with Glasgow's underground club scene and have now achieved an international reputation. As producers, they co-founded dance / electronica label Soma, in 1991, and have worked with many accomplished artists.
Sites: Discogs, MusicBrainz, Wikipedia, Facebook and http://Slam-DJs.com (official).
[2] A Swedish punk rock band, formed in 1982 by five skaters, who shared common music interests and little, or no, band experience. They started as Destroy, with their first gig at Paletten Sätra, after only a few week's rehearsal. About a year later their first recording was released, on cassette (Jan 1983). They were active playing most local and national gigs. Their records were on their own label and widely sold by independent distributors. Their first full length album came in 1984, "Ingens Slav". In 1985, they provided two tracks, including the title track, on USA skate magazine Thrasher's "Thrasher Skate Rock, Volume 3: Wild Riders of Boards" compilation and "Ingens Slav" was included on European punk compilation "Chaos in Europe" (New Rose). In 1986, they released "The End of Laughter" (Subcore) and toured the USA, for two months. The tour included twenty-seven shows, sharing stage with many, including: Circle Jerks, Gang Green, JFA, SNFU, Instigators, D.R.I. and Saint Vitus. Their last shows, in 1987, were at the now defunct Ungdomshuset (Copenhagen, Denmark) and Fagersta Fokets Hus (SE).
Sites: Discogs.
[3] A Columbia, SC, USA, hardcore punk band, who débuted with EP "Have You Ever Killed?" (Mar 2010, Downside).
[4] A German eurodance project, that was produced by Mike Michaels and Mark "MM" Dollar, aka Triple M. Singles: We Get Around (1994), Back To Music (1994), U Got To Know (Doodappenbadappen) (1995), Big Fun (1996), Crazy (1996) and If I Had A Hammer (1997).