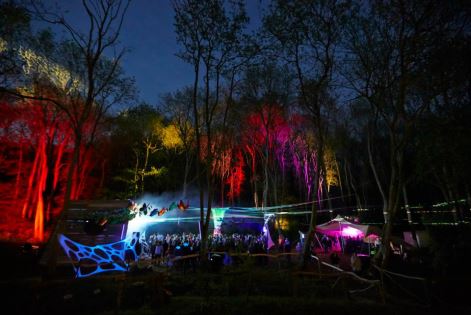 Set deep in the rolling hills of Leicestershire at the heart of rural England, Noisily Festival of Electronic Music and Arts lies in one of the most beautiful wooded valleys in the country.

Totally contained amongst the trees creating a safe haven where hedonism and escapism can flourish and thrive, Noisily Festival 2014 will play host to some of the most exciting musical talent from the UK and abroad, along with a plethora of performance, innovative installations and mind bending visual arts.

You can expect to hear an extremely diverse collection of music; ranging from Electro, Glitch and Breaks, through House and Disco, via the Noisily mainstay of Progressive Techno, to the considerably beefed up Psychedelic line up with the traditional Psychedelic Sunday now including Friday and Saturday as well.

2014 sees the expansion of the site and arrival of the infamous Liquid Stage; after a decade at the sorely missed Glade Festival, Liquid Records has found a new spiritual home amongst the kindred spirits and like-minded ravers in sunny Leicestershire.

Across 3 main areas and a smattering of nano stages; below vast ceilings of woodland décor pulsing to the sound of kicking basslines, shredded in two by laser beams and shards of light; amongst the sound of laughter and a sea of smiles, boredom will be a word soon forgotten.

‘For me Noisily started when I was working at a certain festival near Huntingdon, where Will mentioned that he'd persuaded his dad to let him have a party on his land and asked me to help him produce it.

When I first saw the site I was blown away - it's just the most beautiful spot and despite its proximity to London you can feel totally cut off from the outside world - the woods create the most awesome atmosphere and when you have a big rig pumping it's the most ideal form if escapism; nature at its finest and the music I love at its loudest!

We've learnt a lot over the last couple of years and have been really blown away by the feedback. For us it's always been about throwing the ultimate party that we'd want to go to ourselves and by not trying to aim at a particular demographic or pigeonholing ourselves, the event has grown into its current state very organically and without pretense.

This year the four original directors (myself, Will, Robbie and Audley) are really excited to be joined by the excellent James Anthony of Liquid records who is curating the new Liquid stage. The Liquid Stage spent almost a decade rocking Glade Festival and we’re really excited to give it a new home and to bring the best of UK psytrance into the fold.

We’re being very careful to not expand too far beyond our roots and by opening another arena in the woods it will still retain the intimate feel and the spirit of Noisily, and the music and production we have planned is next level - I couldn’t be more excited about Noisily 2014’.

Published on 09 December 2013 by Wayne Feltham