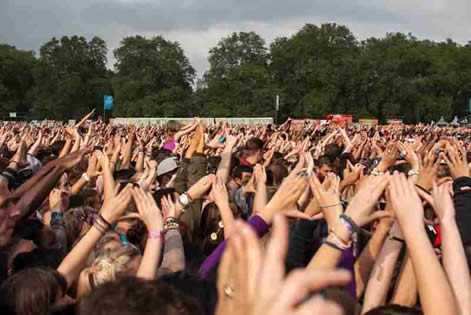 It's a good job we Brits are used to rain and mud, and have enough of a sense of humour to find the whole thing faintly amusing, otherwise people might start getting more than a little fed up with the non-stop non-summer that we are having and not bother doing fun things like going to festivals.

But things being the way they are, despite fat dollops of tropical-sized rain, lakes of mud and a side of water with your chips, day three of Wireless Festival on London's Hyde Park was an unqualified success. Well organised, well thought-out and well staffed, this slick, professional and entertaining event ticked all the boxes.

Perhaps more importantly, it was mindful of it's audience, which was younger than the typical festival average probably due to the move from indie rock-pop last year to pop plus hop-hop this year, and made sure there were plenty of facilities and stop-off points dotted around. They also included some MTV-style touches, such as interviews, backstage chat and competition winners on the big screens to keep the large and enthusiastic crowd entertained during changeovers. It all added up to a whole that was pitched just right to give the feel of a traditional festival but with a pop/teen sensibility.

But what of the music? Cuban/American rapper Pitbull may have a name that sounds like he should inspire tabloid outrage, but his blend of Latin, hip-hop and club-pop is firmly set to entertain. His dark-suited band provided a party beat from the off and, although Pitbull had a fairly serious demeanour behind his dark glasses, it was clear that he was there to have fun. Hit after hit kept the audience jumping, and there was a great deal of warmth towards the crowd. His lively and impressive set culminated in a guest appearance from Ne-Yo for a rousing performance of Give Me Everything from Pitbull's 2011 hit album Planet Pit.

Next up on the main stage was English singer-songwriter Labrinth, who first came to prominence in 2010 when his collaboration with Tinie Tempah, Pass Out, hit the top of the charts. Since then, it has been a steady climb for the multi-talented singer and rapper from Hackney, and his set demonstrated all of his abilities as both a writer and performer. While he may not have the slickness and studied persona of, say, Pitbull, Labrinth more than makes up for it with a genuineness and sensitivity that was always apparent beneath the high production values and club sheen of his well-received debut Electronic Earth. This was an accomplished performance, his second at Wireless 2012, yet it is clear there is much more to come from this rising star.

Rizzle Kicks followed, and there really isn't much say, other than that their popularity is a little mystifying. Apparently, they started by making bedroom demos, and that much is obvious, as their sound seems to have progressed no further. Worse for Brit School kids, Jordan "Rizzle" Stephens didn't seem physically up to performing. Maybe he was having a bad day. Whatever, the teens in the audience clearly didn't seem to mind.

There were no such doubts over J Cole, who took to the stage and lifted the afternoon to the next level. His performance was as assured and confident as his compelling 2011 debut album Cole World: The Sideline Story, and it is clear that, endorsements and rap royalty followings aside, his is a talent that stands entirely on its own. There were few 'showy' adornments to his stage act, and he obviously prefers to let the words and music speak for themselves. After the style-over-substance performance of Rizzle Kicks, J Cole's set seemed initially bare, but that allowed you to concentrate on a man who had a lot to say, and who said it well. In some ways, I thought he was slightly miscast on the main stage at Wireless, as the other acts were perhaps a little too poppy alongside him, but he engaged with the audience well, and brought them with him into his world effortlessly.

Now, I know Jessie J  was on next, and she is a star and huge popular and all. However, I also think that we probably know what she is about and perhaps I should look at some other people on the bill at some of the smaller venues at Wireless. After a traipse through the mud, and having resisted the temptation to photograph the poor folk who seem to have found it a challenge to remain vertical, I headed to the Unwind Stage to catch Theophilus London. I have to confess that he was new to me, but this rapper from Brooklyn, New York, instantly impressed with his blend of soul, electronica, rock and the usual US rapper musical adornments. He is a natural performer and extracted every bit of energy from the room. He was helping by his backing band, who were talented and filled out the sound nicely. I wasn't initially going to hang around for long, as I had other acts to see on my list, but I ended up staying for the whole set. And I am glad I did, as it built steadily and confidently to an impressive finale.

What do you need after a long day stumbling through mud and massive puddles, queuing for toilets, food and everything else, dodging half-deflated black beach balls and struggling to achieve the right compromise of seeing the acts you want while not spending all your time walking between venues? Why, an interstellar rocket-powered trip to the shiniest planet in the clubiverse. And who better to take you there than Calvin Harris. It seems I was not alone in that opinion, as the Pepsi Max Stage (tent, actually) was rammed and the sense of anticipation was palpable long before the ticker tape and light explosion announced the start of Something Massive. Calvin Harris is an expert in the art of taking room full of enthusiastic clubbers along with him on a journey into the realm of dance delirium, and he pulled out all the stops in a show that was the stand-out performance of the day. He was loved by the crowd and he loved them in return – the right man for the right people at the right time, and it was a joy to be there. By the time it ended, everyone had a smile on their face, and I, for one, felt fully recharged.

All the acts ended in time for everyone to wander over to the Main Stage and see global megastar and Barbadian singing sensation Rihanna. Interesting performance and not without merits, but it underlined my belief that there is something called music and there there is something else called fame, and people do get awfully confused between the two.

Wireless Festival 2012 Rihanna Jessie J ...And You Will Know Us By The Trail Of Dead