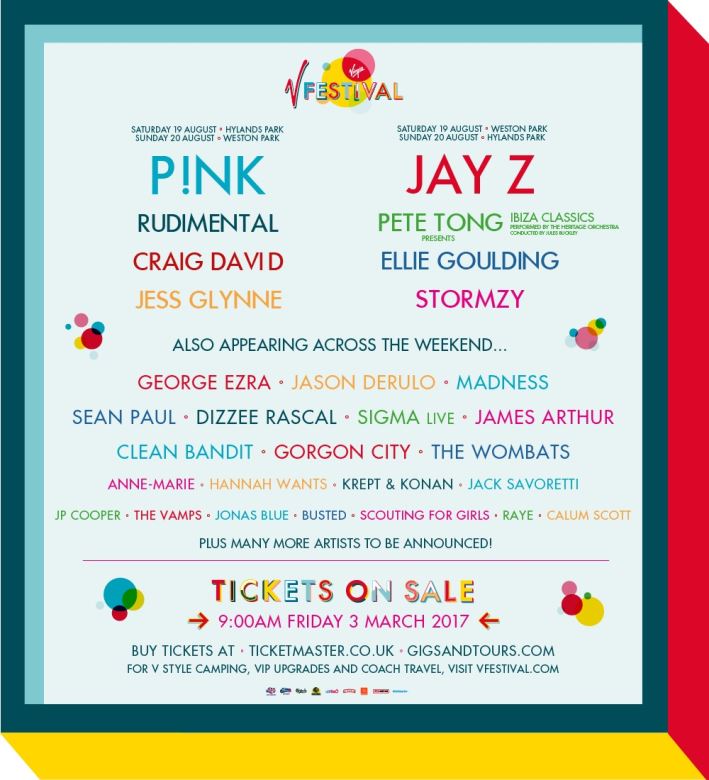 Virgin V Festival 2017 today unveils JAY Z and P!nk will headline the iconic festival, as the first wave of the incredible line up is revealed. V Festival will return once more to Hylands Park, Chelmsford and Weston Park, Staffordshire, taking place between the 19th – 20th August 2017.

Headlining the main stage is global icon Jay Z. With more than 100 million records sold, the 2017 Songwriters Hall Of Fame inductee is one of the best-selling musicians of all time. Jay Z will perform decade’s worth of hits, including his critically acclaimed double platinum-selling album, Magna Carter. Jay Z has smashed global chart records throughout his 20-year music career and been named as one of the greatest selling artists of all time, picking up a phenomenal 21 Grammy awards to date.

Ready to get the party started, P!nk returns to V Festival ten years after her debut appearance back in 2007. The pop icon will be entertaining the crowd with her elaborate stagecraft and choreography, making it one of the most hotly anticipated spectacles of the summer.

Ellie Goulding will also be bringing her infectious electro-pop sound to the lineup at her fifth V Festival appearance. The British songstress is known for a whole host of international chart toppers from ‘Something In The Way You Move’ to ‘Love Me Like You Do’ – which was streamed over 1bn times. Set to stun crowds with her magnetizing sound – this isn’t a set to be missed.

Also returning to V Festival following his incredible performance during the afternoon slot last year  is grime superstar, Stormzy. The ‘Shut Up’ star, who stunned crowds at the Brits last week has also just released his hugely anticipated debut album, Gang Signs & Prayer. He’s kicking off his sold-out UK tour this April – making V Festival the best way to get a ticket to see Stormzy this summer.

Joining Stormzy is Godfather of garage, Craig David. The ‘Slicker Than You Average’ star, who has sold over 14 million records worldwide, will play a host of his smash hits, both new and old, following the success of his most recent album, ‘Following My Intuition’ hitting the number one spot  at the end of last year.

Bringing his urban sound to the star-studded line up is London lad, Dizzee Rascal. The Mercury Prize winner, famed for his upbeat vibe and furious flow will be bringing his summer anthems to crowds this August.

Adding to V Festival 2017’s international line-up will be stateside superstar, Jason Derulo. The multi-platinum pop sensation will be bringing his up-tempo chart toppers to the summer stage, as well as fresh new material including the recently released and highly anticipated ‘Swalla’.

Rudimental bring the party to the lineup with their dynamic drum and bass anthems including ‘Feel the Love’, ‘Not Giving In’, ‘Waiting All Night’ and Ed Sheeran collaborations; ‘Bloodstream’ and ‘Lay It All On Me’. The hugely popular Hackney based band and BRIT Award winners will be the talk of the weekend with many guessing who will join them on stage for what is set to be an incredible day of music.

Sean Paul is hitting the stage to bring the crowd his banging Jamaican dancehall beats. The star, who has worked with everyone from Beyoncé through to Little Mix, has four MOBOs, four MTV awards and a seventh album on the way this year, which he’ll undoubtedly treat V Festival crowds to this August.

Also heading to the festival this summer is one of the most successful electronic dance DJ’s in the world, Pete Tong. The Ibiza legend will bring the sound of summer to both sites with his essential Ibiza Classics orchestra show – this set isn’t to be missed.

The line up for V Festival 2017 includes some of the hottest talent in music right now with V Festival veteran and Grammy award winning British songstress Jess Glynne, blasting the summer anthems to ensure there’s nowhere else you would ‘Rather Be’.

Clean Bandit will also be taking to the stage. The Cambridge-born lineup are fresh out the studio and hot off the heels of chart domination with their recent release and collaboration with Anne-Marie, ‘Rockabye’, famed for snapping up the coveted UK Christmas 2016 number one spot.

Another band famed for their incredible collaborations is Drum ‘n’ Bass duo, Sigma Live. Fresh off their world tour, the duo are ready to set the V Festival stage alight this summer with their plethora of uplifting dance hits such as ‘Nobody To Love’, ‘Changing’ and ‘Find Me’. Also joining the line up is electronic dance music group, Gorgon City. After blazing onto the scene in 2014, the UK EDM duo has enthralled crowds with floor-filling hits such as ‘Ready For Your Love’ and ‘All Four Walls'.

As well as international chart-toppers, the line up also pays homage to a host of homegrown talent. Legendary London boys Madness return to the stage for the third time to delight crowds with their ‘ska-studded’ hits. British boys and singer-songwriters, George Ezra and James Arthur will also join the stellar line up across the two-day festival weekend. Liverpool rockers The Wombats will be pit stopping at the festival as part of a mini UK-tour, celebrating 10 years since their debut album.

Anne Marie, the Essex born pop songstress will be bringing her catchy sound to her home crowd this August. Shortlisted for this year’s critics’ choice award, and fresh from recent hits ‘Rockabye’, ‘Alarm’ and ‘Do It Right’, she’s back in the studio and is set to get temperatures soaring this summer. Queen of UK dance, Hannah Wants will bring her unrelenting electronic gold the V Festival crowd.

Essex producer and dance music sensation, Jonas Blue will be also be returning to his home stage to electrify crowds with his tropical sound after dominating global charts with the recent release ‘By Your Side’. Joining him on the V Festival line up is RAYE, who featured on chart hit ‘By Your Side’

Also added to the bill is JP Cooper, who notably collaborated with Jonas Blue to perform vocals on their platinum UK single and summer 2016 anthem, ‘Perfect Strangers’. His latest track ‘Birthday’ appears on the motion picture soundtrack for ‘Fifty Shades Darker’, which he’ll take with him on his European tour this May before touching down at the festival this August.

Set to get hearts racing and crowds dancing ‘All Night’ is rock-pop boy band, The Vamps. After shooting to fame with their YouTube talent, the band will be hitting the stage this summer, bringing a taste of their 2017 world tour to both sites.

Making their V Festival debut appearance is pop-punk trio, Busted. They’ll be hitting the stage fresh off their 2017 world tour, performing some the noughties most memorable tunes from ‘Year 3000’ to ‘What I Go To School For’ as well as some fresh new material from the ‘Night Driver’ tour.

Calum Scott shot to fame in 2015, after Simon Cowell pressed his golden buzzer for the singer songwriter who claimed an automatic spot on the live shows of Britain’s Got Talent. Since then, the clip has been viewed 111 million times on YouTube leading him to release his audition song, a cover of Robyn’s ‘Dancing on My Own’, which hit the number two spot in the UK chart and most recently received a Brit nomination for ‘British Single of The Year’ 2017.

Similarly, Italian-English solo acoustic singer, Jack Savoretti, also embarks on an European tour this May ahead of his set at V Festival where he’ll play tracks from his top ten album ‘Written in Scars’.

Also joining the line up are MOBO award winning South London duo, Krept & Konan. Following the phenomenally successful release of their debut album ‘The Long Way Home’, they’re set to excite crowds with the ever-growing popularity of their grime sound.

Bringing their infectious sound to the line up is pop-rock trio and festival favourites, Scouting for Girls. Performing chart toppers such as ‘She’s so Lovely’ and ‘Heartbeat’.

Global, the media & entertainment group, continues its partnership with Virgin V Festival as the official commercial radio partner.  This morning the festival line-up was revealed exclusively on Capital and Capital XTRA, giving listeners the first chance to win VIP tickets.  Global’s coverage this week includes an exclusive interview where Stormzy talks to Capital’s Roman Kemp about his performance with JAY Z, airing on the Capital Evening Show with Roman Kemp tonight from 7pm.  Global will have unrivalled backstage access to the world’s hottest artists at V Festival with Capital and Capital XTRA shows broadcast live from the festival right across the weekend.

BBC Radio 1 will once again host their stage on Friday at Chelmsford at this year’s Virgin V Festival. Adding to this incredible line up, the BBC Radio 1 Stage will bring guaranteed chart topping dance anthems, the hottest artists, and newest releases into the mix. Further details including the line up will be announced on Danny Howards show 7pm, Friday 24 March.

Published on 27 February 2017 by Ben Robinson