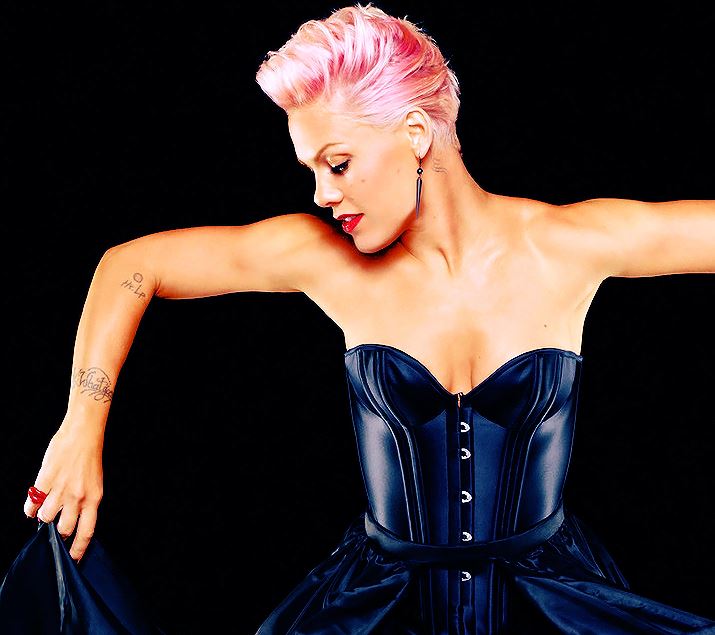 P!nk is a stylisation of Pink, a pseudonym of singer songwriter Alecia Beth Moore (b. 8 Sep 1979, in Doylestown, PA, USA), who gained prominence in early 2000. She has sold over 10 million albums in the United States, over 32 million worldwide, and has won three Grammy awards.
P!nk began her career as an RnB artist, signed to the predominately urban label, LaFace Records. She has since complained that because she chose to relinquish creative control to her record label, she did not like the type of music she was making at that time, and did not like her image, which included bright Pink hair. Her first album, Can't Take Me Home was a substantial success, going platinum, due to the huge pop and urban radio hit singles "there you go" and "most girls".
Towards the end of 2001, P!nk decided to take her career in a new direction and have more creative control. Tired of being marketed as a another cookie-cutter pop act, and eager to become a more serious singer-songwriter and musician, P!nk sought the help of former 4 Non Blondes vocalist, Linda Perry. Together, P!nk and Perry co-wrote and co-produced most of the tracks on P!nk's sophomore album, M!ssundaztood, which was released in November 2001. The album's more pop rock sound could be heard immediately with its first single, the Linda Perry penned "Get the Party Started". "Get the Party Started" was a huge, commercially successful single, topping the charts in many countries. The album's other singles, "Don't Let Me Get Me", "Just Like A Pill", and "Family Portrait" were also radio and commercial successes.
In 2003, P!nk released a new album called Try This. Eight of the thirteen tracks were co-written with Tim Armstrong of punk band Rancid. Try This reached the Top 10 on album charts in the US, Canada, UK and Australia in 2003. Though its singles "Trouble" and "God Is A DJ" didn't do as well in her home country as her previous singles, "Trouble" earned Pink her second Grammy award in 2003. However the singles were largely successful in the United Kingdom and Australia.
P!nk's fourth album, I'm Not Dead was released in April 2006. The first single was the controversial and funny "stupid girls". The album had started causing controversy before it was even released: the song dear mr. president is an open letter condemning the actions of President George W. Bush. P!nk appeared on the Australian TV show "Rove Live", discussing the track, stating that it would never be released as a single in the United States, lest it be misinterpreted as a publicity stunt. A DVD containing concert footage of P!nk's Try This European tour was released in May 2006.
Her fifth album, funhouse, was released in October 2008, preceded by her first solo number one on the Billboard Hot 100, "So What". The following singles from Funhouse, "Sober" and "Please Don't Leave Me", both charted well on their releases around the world.
In 2010 !nk collaborated on The Imagine Project singing Don't Give Up and Imagine. She also featured in the track Won't Back Down for Enimem's album Recovery. In October 2010 she released the first single Raise Your Glass from her first compilation album Greatest Hits... So Far!!.
P!nk was the voice actress of Gloria in the animated movie Happy Feet Two, which premiered in the US on November 18, 2011. She also sang the movie's theme song Bridge of Light.
P!nk's sixth album The Truth About Love was first confirmed by P!nk by Twitter on February 29, 2012. The first single from this album Blow Me (One Last Kiss) was produced by Greg Kurstin and released on July 3. P!nk announced the album title the following day, along with the news of her upcoming world tour. On September 6th P!nk performed Blow Me (One Last Kiss) live at the 2012 MTV Video Music Awards. In February 2013 P!nk started her "Truth About Love Tour", which was so popular that she added additional dates for US/Canada and Australia.
During this time her track Just Give Me A Reason rose up to 9th on the Hot 100, her 14th Top 10 hit on that chart. The following week this rose up to number 5, and two weeks later it topped the Billboard Hot 100 becoming her 4th number-one single in the US. It also topped the charts in several other countries worldwide, and held the top spot on the Hot 100 for three consecutive weeks. On April 29, 2013, Just Give Me a Reason became P!nk's eighth number one on Billboard's Adult Top 40, which resulted in her becoming the record holder for most number ones on that chart, beating out Maroon 5 and Katy Perry who each have seven.
In 2013, Billboard named Pink Woman of the Year, citing the success of her album The Truth About Love and of the singles "Blow Me (One Last Kiss)", "Try", "Just Give Me a Reason", and "True Love", as well as her 2013 tour, which was extended to 140 different sets due to demand. The Truth About Love earned her a Grammy nomination for Best Pop Vocal Album earlier in 2013.
After releasing The Truth About Love in 2012, RCA Records has announced that they have signed Pink for a multi-album deal that will last for years to come.