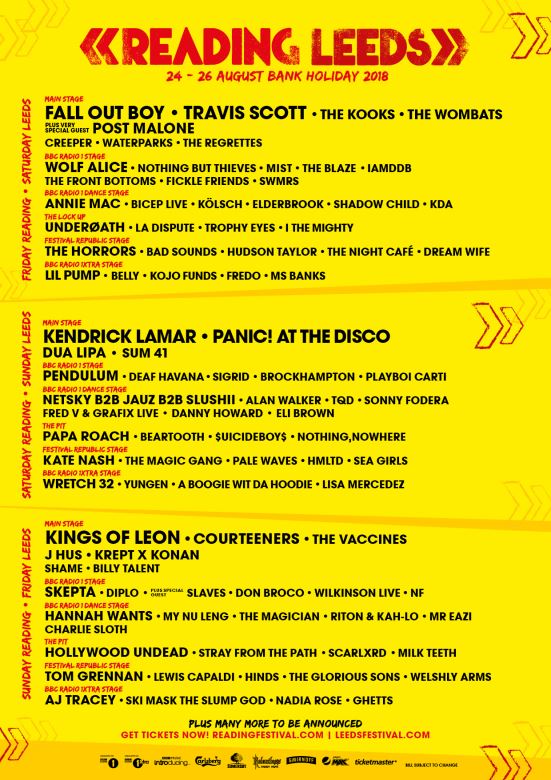 Reading and Leeds Festival has just lifted the lid on more names who will play at this year’s event – with chart heavyweights such as Slaves, Don Broco...

As if the already announced Kings of Leon, Panic! at the Disco, Fall Out Boy and Underøath wasn’t enough, rock music regulars at the festival now have a whole host more reasons to look forward to Reading and Leeds this year. Probably the most popular duo in music right now, Slaves, will make a triumphant return to the stages. Never two to under deliver, the Reading and Leeds crowds can expect the unexpected from the pair responsible for the likes of ‘Spit It Out’ and ‘Are You Satisfied’?

With another top 10 album, ‘Technology’, under their belt, Don Broco will be joining the fray this year. The boys from Bedford are radio favourites right now and fast becoming known as festival favourites who never fail to electrify an audience. They will be joined by current darlings of the UK post-punk guitar band scene, Shame, who will be bringing their debut album ‘Songs Of Praise’ to life at the festival sites.

Bringing their rock ‘n’ raucous performance style to Reading and Leeds, The Vaccines have also been announced. Fronted by Justin Young, one of the best British frontman of this era, the platinum selling band have received legendary status across the globe with a trio of top five albums, and with fourth album Combat Sports out on March 30th next year, Reading and Leeds Festival will host colossal hits such as ‘If You Wanna’, ‘Post Break-Up Sex’, ‘Handsome’, and more.”

It doesn’t stop there – indie rockers The Kooks join Reading and Leeds off the back of their ‘Best Of…So Far’ tour. West-Country punk rock band Milk Teeth hit the UK after a hugely successful North American tour and will be joined on the bill by singer-songwriter Kate Nash who makes her return to the stage after huge success as an actress across the Atlantic.

Indie veterans The Horrors will be bringing their formula of retro-leaning riff-laden rock from the past 17 years along-side legendary Canadian punk-rock band Billy Talent whose generation defining music and live show promises to be nothing short of excellent.

Alt-rockers Deaf Havana will be hitting the hallowed sites of Reading and Leeds Festival this August. The Norfolk based band, whose most recent record ‘All These Countless Nights’ charted at number 5 in the UK Chart, are set to bring their A game. Expect to see some of the band’s biggest hits including ‘Friends Like These’, ‘Trigger’ and ‘Little White Lies’. Bringing a touch of theatrical extravagance to the Reading and Leeds sites are the multi-national, in-your-face sado-glam, hyper-individualistic artpop collective HMLTD.

Indie pop vibes radiate from Brighton-based Fickle Friends, who also join the line-up for Reading and Leeds Festivals today. Fronted by Natassja Shiner, the band have seen vast success with incredible singles such as ‘Swim’, ‘Glue’ and ‘Hello Hello’. Their hotly tipped debut studio album is due for release in March and they are set to win the crowd over with ease this August.

Elsewhere, the list of dance acts playing this summer just gets better. Getting the crowds going alongside the already-announced Annie Mac and with remastered catalogue ‘The Reworks’ coming in March, Pendulum make their return to Reading and Leeds following their huge performance in 2010. Chart-topping ‘Cola’ creator Elderbrook, Wilkinson (Live), Danish DJ Kölsch, down under’s Sonny Fodera, Danny Howard, Shadow Child, KDA and more also join the line up.

After what has been the most successful ever year for the urban music scene, grime, rap and hip-hop fans will be well catered for at Reading and Leeds Festival. Joining an already huge Reading and Leeds line up is Travis Scott, one of the biggest names in US hip hop who will doubtlessly deliver a festival-stopping set featuring cuts from very much-anticipated album ‘Astroworld’. Krept X Konan’s star continues to rise. One of South London’s greatest exports, they join an already strong line-up of urban talent.

Not one to shy away from showcasing promising up-and-coming artists, Reading and Leeds also welcomes some of the most closely-watched new acts to its stages including Scottish singer songwriter Lewis Capaldi who has been collaborating with the likes of Jessie Reyez.

Also joining across both festival sites will be The Regrettes, The Front Bottoms, SWMRS, NF, Alan Walker, TQD, Fred V & Grafix (live), Eli Brown, Charlie Sloth, La Dispute, Trophy Eyes, I The Mighty, Stray From The Path, Scarlxrd, The Night Café, Sea Girls, The Glorious Sons, Welshly Arms, Lisa Mercedez and Bad Sounds. A full working line-up, with even more to be added ahead of August, is available below.

With over two hundred acts expected to play this summer, Reading and Leeds will again be the unmissable festival weekend for music lovers this year – as well as offering a world-leading comedy line-up, with much more information to come on that.

Published on 26 February 2018 by Ben Robinson