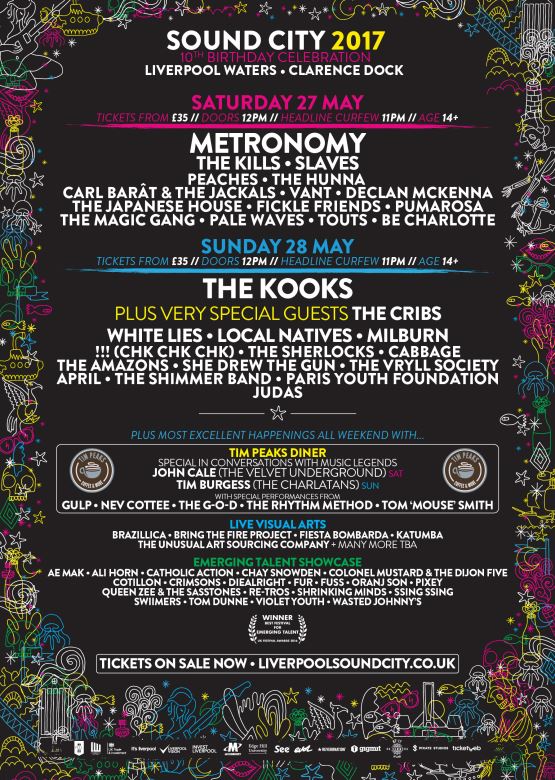 Having announcing the biggest and best line-up yet for its tenth anniversary edition, the multi-award winning Sound City has today revealed even more incredible live acts and an exciting arts and culture programme.

Needing no introduction whatsoever are special guests The Cribs with a one-off performance of their hit third album Men’s Needs, Woman’s Needs, Whatever. Celebrating 15 years at the most credible edge of lo-fi indie-rock – not to mention six studio albums and an extended collaborative period with guitar hero Johnny Marr – The Cribs have always more then represented when it comes to playing live and their set at this year’s Sound City is sure to be a highlight.

Hard-riffing Reading four piece The Amazons burst onto the new music scene last year with a deal from legendary indie label Fiction and a reputation for explosive live shows. With a sell-out tour under their belts and new material in the works this is a great chance to see a proper alt-rock band tipped for the dizzy heights in 2017.

Indie-rockers Vant are well known for their garage/punk leanings, political opinions and blistering live performances. With debut album Dumb Blood hot off the press just last week and winning critical acclaim from all quarters there isn’t a better time to be catching them live as they ascend to rock royalty.

Declan McKenna is a young singer/songwriter in high demand. Having won the prestigious Emerging Talent Competition at 2015’s Glastonbury Festival, Declan’s career has soared with a string of hit singles and his first LP due to drop this May – just in time for his Sound City performance.

Rightly renowned for fostering new talent – the festival won the Best Festival for Emerging Talent at last year’s UK Festival Awards – Sound City has also unveiled the first wave of unsigned artists. After successful shows in Korea with Sound City, Glasgow’s Colonel Mustard and the Dijon Five are back to entertain the crowds and they are joined by a plethora of top-notch acts from Merseyside and Greater Manchester including Queen Zee & The Sasstones. Appearing on the Edge Hill label showcase are Shrinking Minds, Oranj Son and Ali Horn, whilst the BIMM showcase welcomes

Leading the arts and culture line-up is avant-rock titan John Cale. Following his one and only UK performance of The Velvet Underground and Nico on Friday night the great  man himself will be in conversation on Saturday with a once in a lifetime talk that will explore the beginnings of his career, his move to the US and relationship with Lou Reed and his musical direction past, present and future.

Also in conversation is Charlatans frontman and gourmet coffee expert Tim Burgess. In a career spanning almost 30 years at the cutting edge of the indie-rock scene Tim’s fascinating insight into the business is essential listening for anyone with even a passing interest in forging a path in music.

Celebrating its third year at Sound City, Tim is also bringing back his Tim Peaks Diner, world-famous for programming fantastic new acts and of course the finest coffee known to man.  On the menu this year is The Rhythm Method, Gulp featuring Super Furries' Guto Price and youngster Tom Mouse Smith. Alongside them will be The G-O-D, Nev Cottee and some very special guests to be revealed over the weekend.

The wider arts bill includes some of the most spectacularly innovative events and collaborations throughout the festival weekend. The sounds and sights of the Rio Carnival will be brought to life as Liverpool’s Brazilica Festival and notorious party starters Fiesta Bombarda combine to bring something new and a little different. Liverpool based 80 strong Brazilian drumming ensemble Katumba are also collaborating with the Bring The Fire Project, mixing fire and favela beats to deliver a heady south American vibe. The Unusual Art Sourcing Company return again and this year they are taking over their own PopArt themed tent bringing all sorts of delights including the award winning theatre of In Bed With My Brother performed across both nights.

Said Sound City CEO Dave Pichilingi: “Our ten year spectacular is shaping up to be something very special indeed. And we’ve not finished yet - we still have more artists, more music and lots more still to come. Stay tuned for what is going to be our biggest year yet.”

Published on 20 February 2017 by Ben Robinson