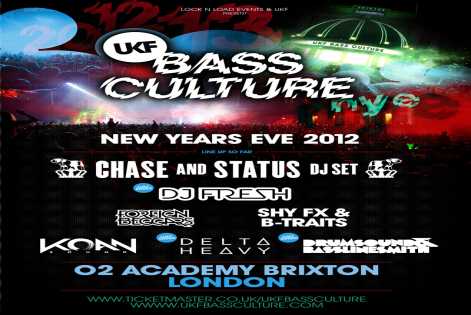 reHosted at London’s favourite music venue, the legendary O2Academy Brixton, UKF Bass Culture will celebrate the finale of one of the greatest years in the Capital’s history, as we collectively step into the future.

Pulsating performances and jaw dropping production will take centre stage, with thousands of music lovers welcoming in 2013. This year has seen UKF Bass Culture coordinate a capacity event at the Academy back in March, host massive stages at UK festival’s Global Gathering and South West Four, as well as pull off a hugely successful residency hosting Amnesia Ibiza’s main room every Tuesday throughout the summer. With seven mammoth acts now announced and many more still to come, UKF Bass Culture is the red hot ticket the New Years Eve…

+ MANY MORE TO BE ANNOUNCED

Bringing to a close the greatest year of their career, Chase & Status are now globally recognised as being amongst the world’s most preeminent acts. Headline performances this year at Ultra Music Festival, South West Four, Global Gathering, Hideout and Ibiza Rocks followed their acclaimed album ‘No More Idols’ going double platinum and a ‘Best British Group’ nomination at The Brit Awards 2012. Welcoming in the New Year with an intense DJ set incorporating raging riffs and high octane breakdowns, this homecoming is a must attend event for those who live and breathe their tumultuous bass driven sound.

After an incredible twelve months of breath-taking moments, ranging from explosive festival performances to the release of his critically acclaimed third album ‘Nextlevelism’, we are delighted to confirm DJ Fresh for UKF Bass Culture NYE. The drum and bass legend has had a spectacular year, kicking things off with ‘Hot Right Now’ becoming one of the biggest selling singles of the year. 2012 has also seen Fresh continue with his FRESH/LIVE concept by taking it on a sold out UK tour. Fresh has also delivered an unforgettable DJ set on the UKF Bass Culture main stage at South West Four, displaying his musical diversity in the process. As he closes the doors on an unforgettable year, Brixton Academy will be gifted with a phenomenal DJ set.

The past twelve months has witnessed Foreign Beggars continue to change the face of UK hip hop. Collaborating with the biggest artists the industry such as Skrillex and Noisia, they have progressed to form a new dance movement. This direction of musical creativity and production has resulted in Foreign Beggars delivering for some of the most memorable festival performances of the year. They respectively tore apart their sets at Exit, Glade and South West Four, incorporating rap, house, DnB, grime and dubstep with maximum crowd interaction. Brixton Academy will become the perfect platform for the Foreign Beggars to perform an amazing live show to see out 2012.

As a pioneer of both the underground and mainstream scenes, Digital Soundboy head honcho Shy FX is also invited to the UK’s biggest dance party this New Years Eve. Shy will perform a back to back set with one of 2012’s most exciting break-through acts B.Traits. As the original Digital Soundgirl, she has had an extraordinary year, bagging a monthly show on BBC Radio 1 and a host of remixes under her belt. B.Traits is already being tipped as one of 2013’s most in-demand acts.

Hailing from Bristol, KOAN Sound complete the next set of lineup additions for UKF Bass Culture New Years Eve. Having moved away from their original 140 BPM template, the past year has seen KOAN Sound produce a much wider range of styles than previously heard. As a consequence their popularity has risen dramatically, with their latest EP, ‘The Adventures of Mr Fox’ receiving exceptional feedback from a wide range of industry figures. KOAN have been showcasing their productions at many of the world’s most famous festivals throughout 2012, from Electric Daisy Carnival to Outlook and Bestival. UKF Bass Culture NYE will allow them to see out 2012 with a bang, smashing out new and old material in true KOAN Sound style.

Drumsound & Bassline Smith have carved out a reputation as one of drum and bass’ most influential players, delivering their trademark beats to dance floors across the world.  In early 2012 they were rewarded for their efforts by winning ‘Best Track’ and ‘Best Video’ awards for ‘Close’ at the Official Drum & Bass Awards. The trio have completed a number of mixes for BBC Radio 1 and 1Xtra and regularly receive support from Annie Mac, Zane Lowe and MistaJam for their mind-blowing studio productions. For over a decade they have ensured their place at the top of the scene, showcasing a vastly diverse collection of music wherever they go. Set to raise the roof, London better be ready when Drumsound & Bassline Smith arrive this New Year’s Eve.

Finalising the lineup announced so far are a pair of producers plucked from RAM’s next generation of talent; Delta Heavy. In February and March the duo embarked on a hugely successful tour of Australia, USA and Canada, showcasing some of the most exciting new music to emerge from the genre in recent times. Since their first remix back in June 2009, they have worked with the likes of Nero, Maverick Sabre, Example and Chase & Status. A hugely respected act who are sure to leave their mark on Brixton Academy, we are delighted to welcome Delta Heavy.