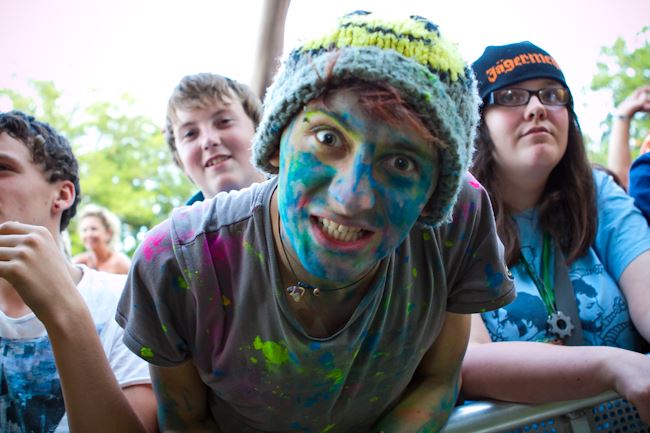 British music festivals, big and small, are renowned around the world for the beautiful and iconic locations, the eclectic coverage of different music and often sheer ingenuity and creativity.  It's for these reasons and the lively and involved crowds that attract the biggest and coolest names in the music world.  Over the last few decades there has been an increase in the number of different festivals being held up and down the country, particularly during the summer months, so many actually that it can often be hard to keep track of them all.

This is where this guide comes in handy, below you will find what we believe to be one of the more comprehensive lists of UK summer music festivals.

Now in it's 12th year, the Wychwood Festival is a 3 day, indie and folk music festival held annually at Cheltenham Racecourse in Gloucestershire.  Along with the music, this very family-centred festival includes comedy, workshops, a silent disco and even a children's literature tent.

The X Music Festival is now heading towards its second year with the event taking place at Bute Park in Cardiff over two days.  The park is a 130 acre sprawl of parkland and landscaped gardens that was at one point Cardiff Castle grounds.

Dubbed The Happiest Festival In The World, The Colour Festival is a party like no other with what are known as “Big Throws” every hour.  Big Throws are when brightly coloured powder is thrown into the air to cover all the people there.

One Live is an interesting festival because not only does it offer live music, it has a very serious side to it – One Medicine.  This is a line of thinking that has been championed by the star of Channel 4's show Supervet, Noel Fitzpatrick, which involves humans and animals being tests and studied at the same time.  You can expect an evening of nice music.

The Parklife Festival at Heaton Park in Manchester is a popular event because of the wide range of music tastes it caters to with the big names that want to play at it.

Although from 1968 through to 1970, the Isle Of Wight festival was a counter-culture event held on the island, in 2002 when it was revived it became one of the biggest and best.

One of the biggest rock and metal festivals in the world, Download is an updated and annual version of the shows that used to be put on at Donington Park in Derby.  If you go to this event, expect it to be very loud and very wild.

Field Day is an annual, one day event held in Victoria Park in the Tower Hamlets area of London.  Now in its tenth year, the alternative rock and indie festival has continued to be a firm favourite with music lovers as every year's tickets have sold out.

One of the biggest events on the jazz calender, the Swansea International Jazz Festival is around 50 events all taking place across 12 different venues within the Maritime Quarter of the Welsh city.

One of the most celebrated and loved contemporary arts and music festivals not only in the UK, but the world; Glastonbury is certainly unique.  Whether you spend time in one of the many fringe parts of the festival or take up your place at the various stages, you will have a good time.

A diverse line-up of performers treat festival attendees to some laid-back entertainment at Burton Agnes Hall in Driffield.

The Greenwich Music Time is a 6 day event of various concerts held outdoors in and around the Old Royal Naval College that looks over the Thames.

A free to enter music festival with something for virtually anyone, situated in the centre of Canterbury.

Wireless Festival has become one of the biggest summer events over the last decade, with it attracting some of the most famous groups and artists from around the world.

Brownstock Festival will be celebrating its 10th year in 2016 with another 4 day event at Morris Farm, featuring a plethora of alternative and more mainstream acts.

T in the Park

Latitude Festival is another great mix of mainstream and alternative acts, ensuring there is something for everyone on the bill held at Hensham Park.

Another of London's great summer festivals featuring some of the biggest names in music.  Because of the diverse mix of pop artists and more indie favourites, Lovebox is perfect for all the family.

Apart from the Download Festival, Bloodstock is without a doubt the biggest heavy metal and rock festival in the country and is held in Derbyshire.  Expect to have sore ears afterwards.

The uniquely dual-location V Festival takes place at both Hylands Park in Chelmsford and Weston Park; this means regardless of which you go to you will see the same bands and artists.

This annual dual music festival has two sites, at the original festival's site in Reading (which is incidentally the oldest still running festival in the world) and in city of Leeds.  It has featured acts of many genres in the past, though recently it has favoured rock, indie and dance performers.

Creamfields is the UK's most beloved electronic dance music festival and a brief look at the line-up each year proves why.