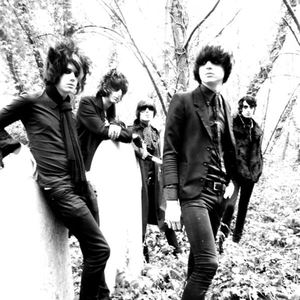 There are at least three bands called The Horrors:
1) A psychedelic/garage rock/post-punk band from Essex, England.
2) A garage rock/punk band from Cedar Rapids, Iowa.
3) An American psychedelic rock band active in the 1960s.
1) The Horrors is a psychedelic/garage rock/post-punk band which formed in 2006 in Southend-on-Sea, Essex, England, United Kingdom. The band consists of Faris Badwan (vocals), Joshua Hayward (guitar), Tom Cowan (keyboards), Rhys Webb (bass) and Joseph Spurgeon (drums). The band has released four full-length albums: 2007's Strange House, 2009's Primary Colours, 2011's Skying and 2014's Luminous.
Formed by ace faces of the East London and Southend-on-Sea angular scene in 2006, The Horrors have released twelve singles, three albums, and an EP in the US. They have been featured on the front cover of the NME, despite their singles being so limited that they are now considered collector's items.
After releasing several singles they released their debut album, Strange House, in 2007. Strange House is primarily a garage rock album with elements of horror punk, and the album contains several of the Horrors' previous singles. They made a number of festival appearances throughout 2007 to support the album, including appearances at Glastonbury, Reading and Leeds, various Scandinavian festivals, the Summer Sonic Festival in Japan, and the Splendour in the Grass Festival in Australia. They have also supported the Arctic Monkeys.
The follow-up to Strange House, 2009's Primary Colours, marked a major change of direction away from garage rock to shoegaze and post-punk. The album was met with critical acclaim and was announced as one of the twelve albums shortlisted for the year's Mercury Prize award, along with being named the best album of 2009 by the NME. The Horrors took to the road to support the album, including slots at Reading and Leeds, Glastonbury, Hurricane Festival, T in the Park, the Underage Festival, and many others. In addition, the band opened for The Kills, Nine Inch Nails, and Placebo, and played a string of headline dates across America and Europe. The Horrors returned in 2011 with their third album, Skying, and were announced again for major festivals including Glastonbury and Reading/Leeds. In addition to this, the band are embarking on their largest headline UK tour to date, including a homecoming show in Southend-on-Sea.
2) A garage rock/punk band from Cedar Rapids, Iowa, which formed in 1997 and broke up in 2003. They released two albums, The Horrors (2000) and Vent (2003). Singer/guitarist Paul Cary recently released his debut album, Ghost of a Man, on Candy Dinner Records in 2010.
3) An American psychedelic rock group active in the 1960s, best known for their single "Briar Patch".
For much more information, go to the band's official forum, "The Horum", and official Myspace.