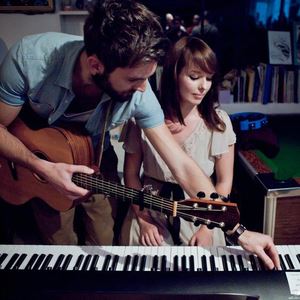 Acclaimed UK based acoustic duo The Daydream Club (Adam Pickering and Paula Walker) didn't start performing together until February 2010, despite having met years before whilst studying at Paul McCartney's prestigious University, The Liverpool Institute for Performing Arts (LIPA). "Really astonishing musicianship... they met at LIPA, so no wonder they're so bloomin' good."
BBC 6 Music Tom Robinson
Their debut album Overgrown was released worldwide via their own label (Poco Poco Records) in November 2010. It includes crowd favourites The Record Shop, On The Move, The Affair and English Rain. This led to airplay on regional BBC radio stations plus BBC 6 Music. "For our debut offering we wanted to create something honest and real. Prior to The Daydream Club we had both been involved in large scale projects... backing tracks, click tracks, lighting and effects etc and that was all impressive on a different scale, but for our first release we wanted people to be impressed by us and our songs, no gimmicks... just us."
In the days pre-Daydream Club, Adam could be found supporting the likes of Sam Sparro, The Wombats, Sneaky Sound System, Tinchy Stryder, DJ Yoda and Felix B (Basement Jaxx) with various bands. Adam has also gained respect for his remixes under the alias Lenny Picko, including; 'Warrior' Magic Wands, 'Manifesto' and 'Die Tonight' Defend Moscow and 'Something Golden' Le Corps Mince De Francoise.
Paula (actually a trained professional dancer) turned her attentions to music after touring internationally with hit percussion show Noise Ensemble, headlining Henley Festival and working with Luc Petit (Director of Cirque Du Soleil). Her melodious vocals add rich layers to Adam Pickerings musical soundscapes. "Together, they appear to have found their true milieu in The Daydream Club." Consequence of Sound
The Daydream Club performed live sessions for BBC Nottingham and BBC Tees, and were filmed for The Beat Videos in late 2010. The clip gained over 30,000 views on YouTube within a couple of months. Following this, both Dean Jackson (BBC Nottingham) and Bob Fischer (BBC Tees) put the duo forward for the first ever BBC Introducing Musicians Masterclass, which was held at two world famous studios, Abbey Road and Maida Vale in February 2011. Only 250 individuals were invited to attend the Masterclass out of thousands of applicants, both Adam and Paula were selected.
In April 2011, they released a limited edition 7 Vinyl The Record Shop aimed to coincide with Record Store Day. The campaign gained a wealth of positive exposure and led to plays on Amazing Radio, New Music Matters Podcast (by Gill Mills, formerly known as Best of Myspace), Jim Gellatelys New Music Podcast RSD Special and an interview Tom Robinson for BBC 6 Music. Their latest release has seen the duo remixing rising artists from around the world on 'The Night | Remix EP', available as a free download release on Bandcamp.
On The Move (Part II) was The Daydream Club's second single released on 12th March 2012. It hints at the developing musical direction for the duo, with a fuller, more expansive sound, recalling the atmospherics of The XX and Cocteau Twins, with The Daydream Club's own trademark boy / girl harmonies. Check out the highly imaginative music video for On The Move (Part II). ‎ youtu.be/wRtM_TP2umI It took 50 balloons, 30 party poppers, 2 days of thinking backwards & just 1 take to make. If ever a video perfectly encapsulated a band, this is surely it. "A beautiful, beautiful song... hypnotic" The Beat, BBC Nottingham
Neon Love Song is the third single from the self-released duo set to be released 28th May 2012. It was hand selected by Burberry Chief Creative Officer Christopher Bailey to be part of the new Summer 2012 Eyewear campaign alongside a cast of other British Musicians including Life In Film, Marika Hackman and One Night Only. All the tracks were recorded exclusively for Burberry with stunning accompanying music videos filmed on set in London.
This re-worked single version was mixed and mastered by Sam Bell (REM, Snow Patrol, Robbie Williams & Foals) and features an epic strings section including Elbow’s violinist and Lana Del Ray’s Cellist. The addition of strings and drums provides the perfect musical foil for the tracks lyrics “Ambience & power, power and grace.”
View the Official Music Video: youtu.be/N-va_0_waeM
Still working under their own label Poco Poco Records now alongside manager, Mark Knight of Right Chord Music. The duo have amassed over a hundred thousand plays on MySpace, have also featured on viral music shows Burberry Acoustic, BalconyTV and Brixton Sessions, have performed a myriad of gigs across the UK and have had adoring reviews and comments received from Radio, blogs and Magazines.
"Effortlessly beautiful... this band is going places and it wants to take you with them." Zouch Magazine