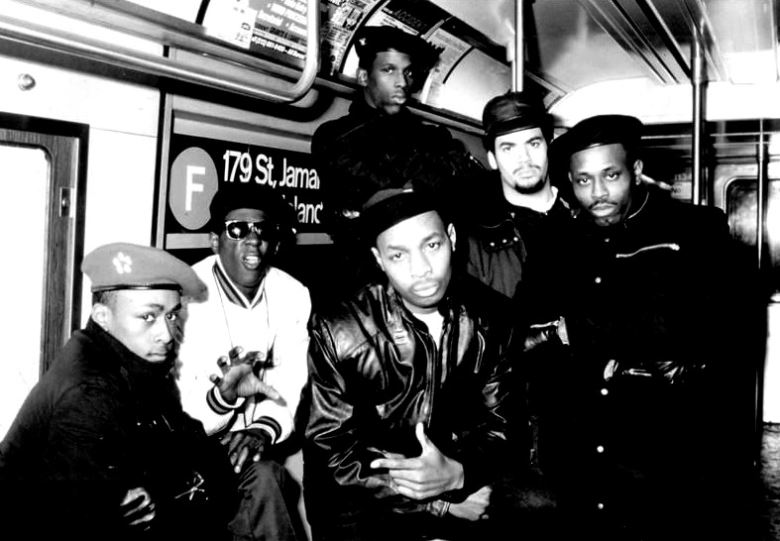 Public Enemy, also known as P.E., is a seminal Golden Age era Hip-Hop group known for their densely layered production and politically charged lyrics demonstrating their interest in the concerns of the African American community.
PE formed in Long Island, New York, in 1982 around a WBAU radio show as Spectrum City. After one less-than-successful single, they regrouped and signed to the still developing Def Jam record label after Rick Rubin heard Chuck D freestyling on a demo. Their debut, ‘Yo! Bum Rush The Show’, was released in 1987 to mild critical acclaim, although the Hip-Hop climate changed dramatically due to sampling during the time of release. As a response, they went on to release the revolutionary ‘It Takes a Nation of Millions to Hold Us Back’ in 1988, which performed better in the charts than their previous release, and included the hit single ‘Don’t Believe the Hype’.
Slightly less militant than their previous releases Public Enemy’s, ‘Fear Of A Black Planet’ was officially recognised as being the most successful and influential of the Public Enemy recordings when, in 2004, it became one of 50 recordings, chosen that year by the Library of Congress, to be added to the National Recording Registry. Sales-wise it was the most successful of any of their albums to date. It included the powerful and controversial singles ‘911 is a Joke’ (which criticized emergency response units for taking longer to arrive at emergencies in the black community than those in the white community), and ‘Fight the Power’, which is considered by many to be the group’s premier self-describing anthem. The song is considered to be amongst the most popular and influential in Hip Hop history and was the theme song for Spike Lee’s landmark film ‘Do The Right Thing’.
Public Enemy are to be considered musical pioneers for a broad variety of reasons. For instance, Terminator X elevated DJing to a refined art. Some of his most innovative scratching tricks can be heard on the track ‘Rebel Without A Pause’. PE’s production team, ‘The Bomb Squad’, offered up a web of innovative samples and beats; critic Steven Thomas Earlewine declared that PE “brought in elements of free jazz, hard funk, even musique concrète, via their [production] team, the Bomb Squad, creating a dense, ferocious sound unlike anything that came before.”
PE revolutionized the rap world with their political, social and cultural consciousness. These themes became infused into skilled and poetic rhymes with jazzy backbeats. They are recognised as the first Hip Hop group to make extended world tours, leading to huge popularity and influence within the Hip Hop communities of Europe and Asia. They also changed the internet’s music distribution capability by being the first group to release MP3 albums, a format virtually unknown at the time.
Public Enemy, in keeping with their ‘pioneer’ status, also helped to form and define the so-called ‘crossover’ genre of music (heavy rock music spliced with hip hop) by collaborating with New York thrash metal outfit Anthrax in 1991. The single ‘Bring The Noise’ was a remarkable potpourri of semi-militant pro-black lyrics, grinding guitars and sporadic humour. The two bands, cemented by a mutual respect, and the personal friendship between Chuck D and his Anthrax counterpart Scott Ian, introduced a hitherto alien genre to rock fans.
During the seemingly unlikely tour of Anthrax and Public Enemy, Flavor Flav made his famous pronouncement onstage that “They said this tour would never happen” (heard on Anthrax’s Live: The Island Years CD). This has become something of legendary significance in both rock and rap circles. There is some justification for the theory that without this unlikely musical partnership, bands such as Rage Against The Machine and Linkin Park would not have existed, and the genres of rap rock, nu metal and their related offshoots might have never developed.
Members of Public Enemy
Chuck D
Real name: Carlton Douglas Ridenhour
Role: Group leader, lyricist, main vocalist, and artwork
Birthdate: August 1, 1960
Flavor Flav
Real name: William Jonathan Drayton, Jr.
Role: Lyricist, vocalist, hype-man, and comic relief.
Birthdate: March 16, 1959
Professor Griff
Real name: Richard Griffin
Role: Head of S1W, liaison between PE and S1W, road manager. Ensured that the chaotic Flavor Flav was available when needed. Occasional vocalist and/or producer, plays drums at live shows.
Birthdate: August 1, 1960 (the same as Chuck D)
Terminator X
Real name: Norman Rogers
Role: DJ, Producer
Birthdate: August 25, 1966
Dj Lord
Real name: Lord Aswod
Role: DJ, Producer
The following are a part of The Bomb Squad, the revolutionary production group which is closely associated with (and sometimes considered a part of) Public Enemy:
Hank Shocklee
Real name: Hank Boxley
Bill Stephany
Keith Shocklee
Eric “Vietnam” Sadler
Chuck D - often listed as a member of the Bomb Squad under the pseudonymn “Carl Ryder”, a shortened form of his real name.
The S1W’s are sometimes considered a part of Public Enemy, as well.
There are three other groups named Public Enemy:
2) The first Public Enemy, an Oi!/punk band formed in 1984 who released one LP album (England's Glory) and one 7 inch (Skinheads). This band was never white supremacist and has no connection to the "revived" Public Enemy:
3) White Power group from the UK, formed by Paul Burnley (of No Remorse). Released 3 CDs: “Paul Burnley Is The Real Public Enemy”, "There is only one..." and “Archives”.
4) Public Enemy was a Hardcore/Punk group from Tuscon, Arizona.