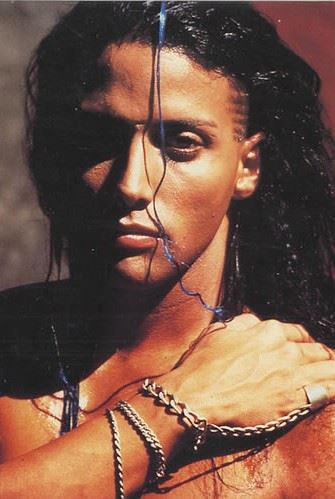 Also known as Louie Cordero.
Louie Louie (born Louis Cordero) grew up in California with three brothers and two sisters. Throughout his childhood, his family moved frequently through the state and he went to a new school almost every year. When Louie was 15, he started entering and winning dance contests at colleges. When he graduated from high school, he worked in the car business by day like his Dad, but still continued to do the dance contests at various clubs around Southern California at night. He eventually quit selling cars to pursue dancing and acting full-time.
On an audition for a break dancing movie in 1984, a casting director saw Louie and knew he would be perfect for Madonna’s new "Borderline" video. Louie met Madonna, the two clicked immediately and he got the job. The two became close and one day when Madonna heard him sing in the car she said, "Oh my God you sing, too. We’re gonna be the Olivia Newton John and Travolta of Hollywood."
Louie also played 'Rick' in "House Party 2."
In April 1990, Louie released his first album, "THE STATE I’M IN", which was regarded by Rolling Stone as having "...enough emotional dynamics to keep listeners busy in their brains, as well as their butts".
The album's first single, "Sittin’ In The Lap of Luxury", featured trumpet by Dizzie Gillespie and enjoyed success on Billboards Hot 100, Hot Dance Music/Club Play and Hot Dance Music/Maxi-Singles Charts. A second single off the album, "I Wanna Get Back With You", also spent time on the charts. Louie also toured the United States and Canada with Erasure for the album.
It wasn’t until 1993 that Louie recorded his second album, titled "LET'S GET STARTED." For this project, Louie worked with Prince on two songs titled "Get Blue" and "Dance Unto The Rhythm" and with George Michael on the single "Brother Louie".
After a rigorous press tour around Europe, he enjoyed moderate success and was homesick for the US. Still searching for his identity in music, Louie signed a new deal with Trauma/Interscope and recorded the "LOUIE CORDERO" album (released under his name, Louie Cordero). He worked with producer Dennis Lambert, who wrote the original "Ain’t No Woman (Like the One I’ve Got)", and half the songs were recorded in Spanish while half were in English.
"Although I am Puerto Rican, I was born and raised in Southern California. Latin people have a lot of different flavors and I represent a flavor, it’s how I blended the percussion, drums, energy and passion of my background into my own unique brand of brown-eyed soul," said Louie.
Louie Louie first came with his band to Las Vegas as the House Band for Sunset Station. In time, the Las Vegas Hilton gave Louie Louie both his own showroom and the freedom to play with his act.
In 1998, Nevada Governor Bob Miller declared July "Louie Louie Month" to honor the performing artist for "bringing Las Vegas back to its roots – back to the days when the best performers were in the lounges of Las Vegas’ legendary hotels." On August 21, 2002 Louie was awarded the Key to the city by Mayor Oscar Goodman.
Today, his motto remains "dance, love and work." The singer/dancer, who plays and performs only happy tunes, wants people to feel more alive. "It's all in the music," Louie Louie says. "I've never gone to confession. Never felt the need. I talk to God constantly. I confess live."
He is currently recording his latest album, Evolution.
Albums:
- "The State I'm In" (WTG Records, 1990) Billboard Top 200 peak #136.
- "Let's Get Started" (Warner Bros. Records, 1993), did not chart.
- "Louie Cordero" (Trauma Records / Interscope Records, 1996), did not chart.
- "Dance Love Work" (DLW, 2002), independent release, did not chart.
Singles:
- "The Girl Who Seduced The World" (Synthicide Records/Enigma Records, 1987), did not chart.
- "Sittin' in the Lap of Luxury" (1990) Billboard Hot 100 peak #19.
- "I Wanna Get Back with You" (1990) Billboard Hot 100 peak #69.
- "Rodeo Clown" (1990).
- "The Thought of It" (1993) - UK #34.
- "Walk With Me" (1993)
- "Don't Say You Love Me" (1996)
- "Ain't No Woman (Like The One I've Got)" (1996)
- "Mad Love" (2002)