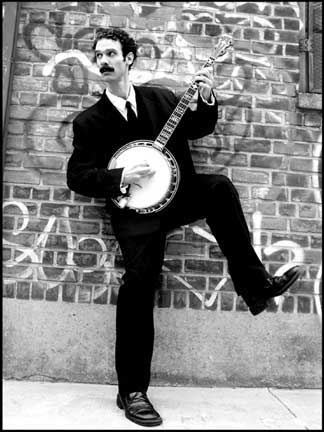 Angry folk-country-punk-blues, whatever, banjo wielding showman Eller sings dark and ageless tunes.
An excellent and highly intriguing singer/songwriter who is based in New York City, Curtis Eller has successfully brought a variety of influences to his unorthodox folk-rock vision. The banjo-playing Eller's work has an old-time feel, drawing on an abundance of direct or indirect influences from the '20s, '30s, and '40s (including country singer Jimmie Rodgers, cowboy icon Gene Autry, and Mississippi Delta bluesman Robert Johnson). But Eller's material is far from a carbon copy of music from that era -- there is plenty of rock bite and attitude in his rootsy work, which also contains elements of Bob Dylan, Neil Young, and the ballsy outlaw country of Johnny Cash and Merle Haggard. Eller, consciously or unconsciously, reminds listeners what Dylan, Cash, Son House, Pete Seeger, and Haggard have in common -- they are all known for being effective storytellers, and storytelling is where Eller himself shines.
The Queens resident is clearly fascinated by American history; he has written about the American Civil War, silent film star Buster Keaton (who he considers a strong influence), and aviatrix Amelia Earhart. Quite often, Eller's subject matter can be dark; "Alaska" is about a mining disaster, and "The Execution of Black Diamond" was inspired by a bizarre 1929 incident in which a circus elephant was paraded through the streets of a small Texas town and "executed" (the mayor took the first shot) after attacking and killing a local woman. Circuses, in fact, are a major interest of Eller, who studied juggling when he was a kid and calls his band Curtis Eller's American Circus. Eller has often said that his goal as a performer is to "capture the spirit of the Hartford Circus Fire of 1944," a tragedy that cost 167 people their lives and became the worst disaster in the Connecticut city's history.
A circus inferno is a bizarre way to measure artistic or creative success, but then, Eller's eccentricity is part of what makes his work so interesting. A website on the history of Hartford has posted the lyrics to "Hartford, CT," an Eller song describing the World War II-era tragedy. Another unusual thing about Eller is the way he plays the banjo, his primary instrument. Instead of playing it in an exuberant, bluegrass-like fashion, Eller often makes the banjo sound moody, haunting, and dark -- in Eller's hands, the banjo becomes the perfect instrument for songs about mining disasters and circus tragedies.
Originally from Detroit, MI, Eller listened to a variety of music when he was growing up in the Motor City -- everyone from Son House to Iggy Pop. After leaving Detroit, he spent some time in North Carolina, where he was the musical director for a local theater troupe. But Eller grew disenchanted with the theater and moved to New York City (where he made music his primary focus). Eller's debut album, 1890, was released in 2000 and was followed by the three-song EP Banjo Music for Funerals two years later. In 2004, Eller released his second full-length album, Taking Up Serpents Again.
On March 25, 2008, his third album was released: Wirewalkers & Assassins. The album continues to explore and expand upon the themes and influences (both musically and lyrically) from his previous work. Overall, the music on the album is a little fuller and darker than his previous albums.