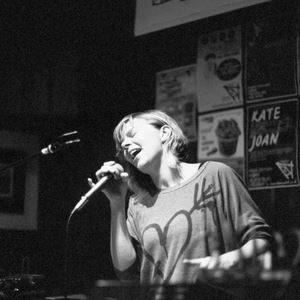 Cate Ferris
Whimsical, folk tinged, blues strewn songs of praise for a 21st Century soundscape.
Brighton based singer/songwriter Cate Ferris, using a guitar, keyboard, loop station and drum, is captivating audiences across the South with her solo project, performing magical songs sung with an incredible voice. Folk and dark soul lie at the heart of her sound, and the largely acoustic instrumentation is tinged by hard hitting lyrics and intricate harmonies.
“We fell in love” - BBC Southern Counties
This year, as well as working with 'Disraeli and the Small Gods', Cate wrote and recorded a song called Minus 2 Degrees, produced by Nick Manasseh and released by Roots Garden Records, and “Shine” in collaboration with Brighton duo, Nordic Giants.
"Laura Marling, introduced as one of the greatest folk singers of all time, draws the biggest crowd of the weekend... It's Dizraeli & The Small Gods, however, telling touching, funny stories of riots, atheism, Englishness, through folk, rap, spoken word and hymns, who embody 21st-century folk."The Independent, August 2011
"Nordic Giants have a sound that appeals to much wider audiences.It’s lush, cinematic and gorgeous.Cate Ferris adds the perfect vocal touch on “Shine”,taking the song on a boundless journey with swells and falls.It moves me every time." KnoxRd.com January 2011
Cate began songwriting at the age of eleven, performing initially to the cleaners at her school who let her use the grand piano in the hall when everyone else had gone home, and subsequently to friends, family and audiences round town. Six years later, realising that it was not possible to take a keyboard travelling, she taught herself to play guitar and set off, firstly to Israel and then to India, where she studied classical indian flute and singing.
“Biting songs that will make everyone stand up and listen.” - Acoustic Sussex
On her return to the UK, Cate joined an indie band called “Oceana” and began expanding her vocal style and exploring heavier genres of music. After three years of extensive writing and performing, supporting the likes of Aqualung, she went on to form the band Afterspark with bass player, Adam Staff and together they self-released an album called “Sometimes we Forget”.
“like a pre-electric White Stripes (but only with Joni Mitchell singing)” - Buckle Up
"all the Joni Mitchell meets Radiohead comparisons, whilst understandable, don't actually do justice to Afterspark's craft. Cate Ferris's evocative word paintings demand attention in their own right; add to that their imaginative atmospherics, compelling harmonic ideas and the fact that it's all delivered with haunting, goose bumps on the neck, vocals” - Red FM
Cate, whose solo mission is as dazzling as her bands former work, is working on a her first album which will feature the songs Hurricane Skies, How to do Magic Tricks and Trapeze, live versions of which can be viewed on You Tube or listened to on Myspace.
Keep up with the goings on, new song ideas, gig dates and recently recorded videos on
Facebook and at WWW.CATEFERRIS.COM