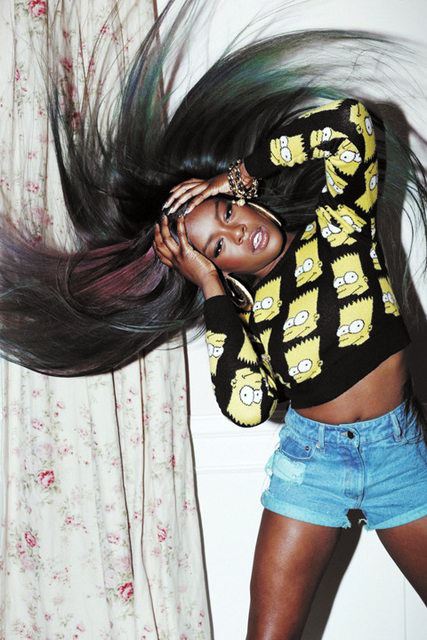 Azealia Amanda Banks (born May 31, 1991) is an American rapper, singer, and songwriter from Harlem, New York, USA, formerly known under the pseudonym Miss Bank$. Banks rose in notability in 2011 when she topped NME's "Cool List", finished third in BBC's Sound of 2012 and released her breakout debut single 212 (feat. Lazy Jay). Releasing the 1991 EP and Fantasea mixtape in 2012, her debut album Broke With Expensive Taste was delayed for three years, being released in November 2014.
Growing up, Bank's mother raised her and two older sisters in Harlem after their father died when Banks was two. At a young age she became interested in musical theater, acting, and singing. She performed in off-Broadway musicals with the Tada! Youth Theater, and attended LaGuardia High School of Performing Arts where she starred in the school production of City of Angels at sixteen. An agent became interested in her, and she dropped out of high school in order to pursue a music career. Under the moniker 'Miss Bank$', she released her debut Gimme A Chance (accompanied by Seventeen) onto the internet in February 2009. Later that year, Banks signed to record label XL Records and began working with producer Richard Russell; she left the label later that year due to conflicting ideas.
Following this, Banks left behind the 'Miss Bank$' moniker and formally became Azealia Banks, which preceded a move to Montreal. Banks uploaded several demo tracks on Youtube - including L8R and a cover of Slow Hands by Interpol. In September 2011, Banks released her debut single 212 (feat. Lazy Jay) as a free digital download from her website, which was subsequently released officially on December 6, 2011 as the lead single from one of Banks' future releases. The track attained European chart success, peaking at number seventeen in Netherlands, number twelve in the United Kingdom and at number seven in Ireland. Though unsigned at the time, Banks began working with British producer Paul Epworth on a debut studio album. In December 2011, it was announced that Banks would feature on Scissor Sisters' single Shady Love, though uncredited.
On January 16, 2012, Banks released NEEDSUMLUV (SXLND), coinciding with the thirty-third birthday of the late singer Aaliyah, who is sampled on the track. A week later it was announced that the Paul Epworth-produced Bambi had been selected as the soundtrack for the Mugler F/W 2012 men's show. In February, she announced that her upcoming debut album would be titled Broke With Expensive Taste. In May, Banks announced plans to release a mixtape called Fantastic (later changed to Fantasea). Preceding its release was Jumanji on May 11, Aquababe on June 13, and Nathan ft. Styles Pon June 30. Fantasea was released on July 11.
Banks' first extended play, 1991, was released in the United Kingdom on May 28, 2012 and in the United States the following day. Both the title track and the EP itself achieved success, charting in Europe and the U.S while reaching gold in Australia. The music video for Liquorice was released on June 14. BWET, originally planned for release in September, was pushed back to January 2013.
During this time period, Banks maintained several feuds with celebrities and other artists (Angel Haze, Perez Hilton, Lady Gaga, Lily Allen, T.I., Baauer, A$AP Rocky, Lorde, Disclosure) on Twitter. In March 2013, her account was handed over to management and all tweets were deleted. However, she regained access. BWET singles Miss Amor, Soda and Chasing Time were announced but not released. However, Yung Rapunxel and ATM Jam featuring Pharrell were released in January 2013 and September 2013, respectively. In January 2014, Banks said she was "literally begging to be dropped" from Interscope via Twitter, as BWET was moved back to March. In February, her Soundcloud was deleted due to copyright infringement on Fuck Up the Fun. Banks, frustrated with delays to her album, announced on Twitter that she would be leaking BWET on April 15, but the album was not leaked. New single Wallace was announced but not released.
In July 2014, Banks announced she was being released from her label and announced Heavy Metal and Reflective as her next single. This was followed by Chasing Time in September. On November 6, Banks dropped Broke With Expensive Taste on iTunes with little warning.