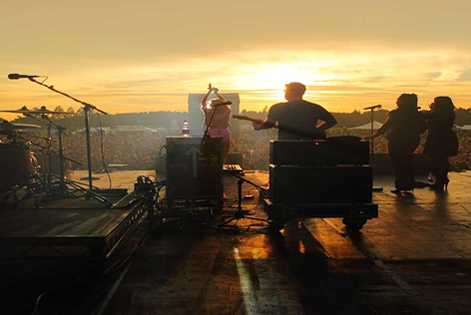 A new name for a festival that is only in it's second year. The festival, which began only 12 months ago as Norfolk Specactular, was this year rebranded as Sundown Festival and took place at the Norfolk Showground on the edge of Norwich.

Held over two days Sundowns' line-up was made up of predominantly urban music acts, although the Saturday had much more of a pop music feel that undoubtably appealed to the overwhelmingly young/teenage audience.

As It was, the day went by with, for me, generally quite uninspiring acts doing their thing, although the crowd did thoroughly seem to enjoy themselves with Wiley and the very promising and local Ria Richie providing the best of the day.

Having a DJ on stage between acts definitely helped to keep the atmosphere alive and stop the usual drift away to the rest of the site during changeover and the large funfair that was there, which I personally never like to see at festivals and think distracts from the music.

Sunday, I feel presented a much more promising line-up and had a slightly more grown-up feel too that was made up of more urban acts.
Former Mercury and Brit award winner Ms Dynamite gave an enthusiastic performance which was followed by the talented and definitely up and coming Delilah.

Then the atmosphere really started to intensify with a very good performance from rapper Labrinth. Although surprisingly rather visually underwhelming his music certainly hit the mark, stirring the crowd and setting the evening up. Sub-Focus came next with quite an extravagant light show which would have been more impressive had it been later in the evening to show it off to it's true potential.

The real highlight of the weekend for everyone I think, including myself, was a really excellent DJ set from Radio Ones' Zane Lowe that stimulated the whole site and raised the tempo to real heights with a great mix of anthemic tunes that turned a run of the mill show ground site into what felt like a full on Ibiza nightclub.

By the time headliners Chase and Status came on-stage the Norfolk crowd was definitely up for a big finale. With a great light show and commanding presence the performance reeled of lots of their hits and concluded the weekend in real style.

Although, it maybe yet didn't feel like a true festival but more like two quite separate music days, with only a small percentage of the crowd camping on-site and maybe not helped by its rather bland show ground environment.

To conclude, it was a very successful event which will hopefully grow and develop further. It was on the whole, well organised and executed and I look forward to it's future development.

Published on 06 September 2012 by robmarrison