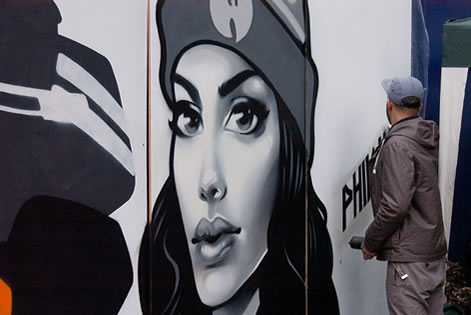 Streetfest London 2012 -  As we arrive at the Hearne St. Car park location you can't miss the array of artists lined up, working away, producing stunning pieces of graffiti art which continued throughout the day on the surrounding walls.

The hip hop vibe began to feed into our brains as we continued to explore the site, stumbling upon the spoken word stage. It’s amazing the feeling you get from hearing people's poems and views expressed with humour and emotion, all accompanied by a guitarist and a drummer. Some of those guys had serious talent!

Action took place with 2 half pipes on site with some fine displays of skill from the inline skaters, skate boarders and BMX riders, riding for prize winning places in the competitions throughout the day as well as entertaining the crowd with the practice sessions.

The music on the Adidas Stage was kept up tempo all day with DJ's performing and MC's keeping the crowd alive with energy, for the performances to follow.

Lady Leshurr was always going to be great and did not disappoint on stage, such a huge presence!

DJ Wookie had probably a good hour upon the decks giving us a collective mix of some of the finest garage music produced,  taking the crowd through the years and making the whole place want to party!

What can be said for the headline artist? Grime legend Devlin took to the mic to give a short but lyrically genius display of talent, showing why he deserves to be in the position of popularity he is in today. Playing some of the crowd favourites he finished with a reminder of why he is one of the best British Grime MC’s of today. I have never heard someone talk so fast with so much passion! Don’t miss the opportunity to see him on tour this summer!

Some great street dance performances as well as top quality food and reasonably priced drinks meant for a good day of all round street entertainment.

Finishing at 11 after a continued party vibe throughout, I rate this an excellent 1 day festival and great value for money. The crowd completed an excellent line-up with everyone getting involved in the party spirit.