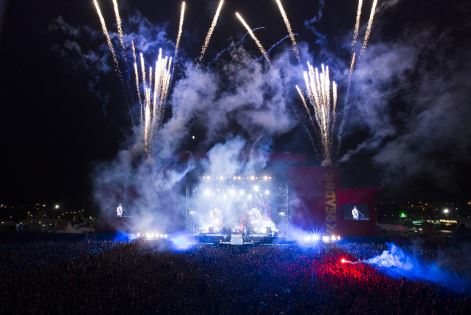 So it has been 4 years since last attending with much regret so we knew this was going to be a special year. Reading has an atmosphere that rivals any other festival and with free hugs abundantly available for free, who wouldn’t have a smile on their face. Not only this, but it seems that Reading has gone back to its roots with one of the best line-ups in years.

The weekend started with us heading down to the site on Friday later than anticipated – I’m going to blame a poor Sat Nav and traffic. Arriving at peak hours I was wincing at the thought of queues of mad festival goers everywhere but was pleasantly surprised that since we have last stepped foot on the Reading grounds the organization is now second to none, all except one point. The monotonous queue through all the turnstiles to get your wrist band. Still if this is going to be the only bad point then who cares we only need to get our wrist band once

Once on site wrist bands on our arms we made our way through the camp site presented by the usual site at Reading festival namely the aftermath of the night before in the camp site, this is when you know you really are at Reading. Swaths of people poking their head out of an all too warm tent wishing they didn’t have that one last beer the night before. Still with fresh faces, clothes and shoes we made our way to the main arena entrance and before we knew it was swiftly surrounded by a wall of Reading’s finest music from all angles. Big smiles all round on everyone’s faces right now.

Ok so first things first – Cider. The traditional Cider and walk of the arena site seeing what is on offer this year I was astounded to find a host of arenas I hadn’t seen before and what’s more everything was close enough to know we weren’t going to miss anyone we wanted to see while trying to make our way through the barrage of music hungry Reading fans.

Friday was going to be a day of easing into the blissful Reading madness so we took ourselves off to the Main Stage for our first at of the day Frank Turner and he didn’t disappoint. Although the crowd was a bit thin mainly due to most people still being in tents Frank Turner had the whole crowd on their feet dancing – including his mum who seemed most pleased to be on the stage. Next came Deftones a personal favourite of mine, as mentioned before it’s great to see Reading at last putting some great rock acts on. This was swiftly followed by System Of A Down – yes I did say trying to build a prison!! All of this was enveloped in a few more ciders but what we were really waiting for was the sun to set so we could get up close for Green Day. When they hit the stage they didn’t disappoint the crowds cheered to the knowledge that they were going to play Dookie back to back. A favourite album of mine and the crowds. Last time I saw a band do an entire album was Metallica Master Of Puppets at Download and this more than rivalled that. What can I say an epic end to a first day of Reading Festival and one that was going to be hard to top.

Saturday began with an early rise and trip into town, fed and watered we felt thoroughly rejuvenated to get involved in Saturdays line-up, what’s more we had one more Reading-ite joining us that day to share the magic with. So back in the Main Arena we were immediately greeted by Twin Atlantic not knowing the band intimately myself I was amazed at how front man Sam got the crowd whipped into a frenzy that even a jar of pickles would have loved it. Next up was White Lies and then the Foals who continued with the show. Being a recent fan of the Foals I was on my feet jumping to songs including Inhaler and the one that has everyone moving My Number. In fact as soon as this dropped the whole crowd new they were going to be partying for the rest of the day and night. After this we decided to pop in and hear Magnetic Man, with them being a resident on my iPod for some time its seemed rude not to. It was like I had the Ipod still in my ears the sound and performance was that good! For any Magnetic Man fans all I’m going to say is “I Need Air”. Packed into the Radio one dance tent thousands of eclectic Music fans just bursting out of the sides with what can be described as synchronous bouncing to tune after tune. So now time for the finale, Eminem! Waiting at the Main Stage cider in hand we discover that he is going to be a bit late on so we take the opportunity to catch some of the Alt J set on the NME stage. A relatively young band with one studio album but awesome by title and music they played track after track from An Awesome Wave. So enthralled were we that we completely forgot and missed Eminem as I suspect a lot of people in the crowd did. This did not matter though as at this point they were a close second to Green Day the evening before.

So it’s Sunday the Final day. Everyone with sad eyes know another year is almost at an ended we pick up our tired bodies and head off back through the now slightly less well arranged swath of tents we had seen on Friday back to the Main Stage to see Don Brocco. Already the crowd was pumped and ready to give it their all for the last day and festival for most people’s summer. We decided today was going to be a Main Stage day. What followed was a set from The Editors and The Lumineers of which I’m both a huge fan. However we were all somewhat disappointed by The Editors lack of crowd participation and as amazing as The Lumineers set was – and it really was an amazing set I think it would have benefited from being on a slightly smaller more intimate stage. Next up fall out boy with “Dance Dance”. Ok I now feel a bit old, ah but who cares I’m at Reading Festival!! The day passed in a flash mainly due to wishing it away for the Biffy Clyro set that we knew wouldn’t disappoint. I could list everyone they played but I won’t, if you’re a Biffy fan then know they played them all!! What more they wowed the crowd with a laser show, streamers and fireworks that kept every single weary foot on its toes dancing until the bitter end!

So that was it, Reading Festival 2013 done until 2014. Should we cry we all feel like it? It’s always a sad moment knowing one of the best weekends of your year is now over. But what can I say to all those Reading doubters and encourage them next year. Well you’re not going to find another festival on the planet like it. A line-up and music that will beat any festival, even to those who didn’t like the line-up – you know who you are Victoria. I also have to say that this year the sound system and production was remarkable, not even the wind could drag the sound from your eyes. That combined with the amazing staff from the bars security and volunteers, everyone had a smile on their face.

A big thanks to everyone that helped us and the amazing job that everyone at The Zeitgeist did on their first year it was an absolute pleasure and honour.

We look forward to seeing you next year Reading Festival till then we will miss you.