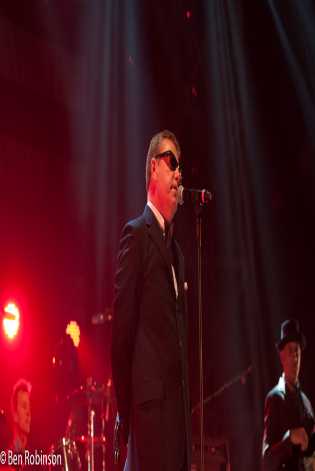 Starting with a raining day, things to begin with were not looking up.  Arriving on site in Minehead cold and moist we checked into our accommodation.  Immediately re-kindling those childhood memories of early family holidays we settled in and began to explore what Butlins Minehead and House of fun weekender had to offer.

The site itself is vast and hosts an array of pubs, restaurants, and venues to cater for everyone’s needs.  However this weekender was adults only and the Irish bar looked a particularly popular destination, with its Karaoke and Guinness on tap it was a recipe for success.

First act up for the Friday were the hosts and much anticipated Madness.  Playing a medley of tracks from their new album, the party spirit soon swung into action and with the expected swagger from the Madness crew lighting the crowd into a further.  After a relatively short but sweet set, this called time on the Skyline Pavilion stage.  The party then moved to other stages including Reds, Centre Stage and Jaks.  This seemed a little unfortunate as Skyline  Pavilion was such a large spectacular stage it was a shame not to take advantage of the impressive sound system and large capacity.  Still this over sight didn’t seem to stop the crowds as they danced their way to the other stages to see the likes of Beardy Man, Mr Scruff, Andrew Weatherall and party the rest of the night away into the early hours.

The next day and our first look at the Minehead site in day light we were still equally impressed with what was on offer.  Although Minehead itself had very little to offer, there was little need to actually leave the site with everything from banks, to supermarkets, and restaurants all on site.  Not only this, there was a host of activities arranged for the day including the World Record attempt of the longest Madness Nutty Train.  An attempt which didn’t stay that for long with the record being crushed with 402 participants.

The first of the evening music started with Barry Peters on the Pavilion Stage, this next culminated with the main set of Madness again back on the grand Skyline Pavilion stage.  This time though they were not playing any of their new material but an epiphany of everything that makes Madness MADNESS!  This was evident by crowds energy, with the venue almost packed to capacity, despite the conditions outside the crowds were set for a party!  With hit after hit Madness didn’t fail to impress.  With Our House, One Step Beyond, and it Must Be Love the crowd were not left wanting.

With the set coming to an end that was all for another evening on the Skyline Pavilion Stage.  Onwards and upwards, with the other stages playing till the early hours we were sure to find more than enough to keep us entertained and we sure did!

Keeping the crowds entertained through the rest of the evening were Dan Le Sac, The Correspondents and Don Letts to name but a few.  In true Butlins and House of Fun style the crowds donned their fancy dress outfits and sauntered the night away, in everything from Pirate costumes to a freshly dug carrot.

All in all House Of Fun Weekender was certainly that.  Despite the weather and long drive it proved a worthy weekend to match that of any of the summer festivals.  With the average price of festival tickets rising all the time at £170 for the weekend with self-catering accommodation this was near luxury compared to the muddy fields of any festival.  Perhaps next year the weather will shine a bit brighter, but if not we will be there soaking up the rays from the last of a great festival season and going out with a bang.  We give House Of Fun Weekender a well-deserved 8 Out Of 10.

Published on 28 November 2011 by Wayne Feltham