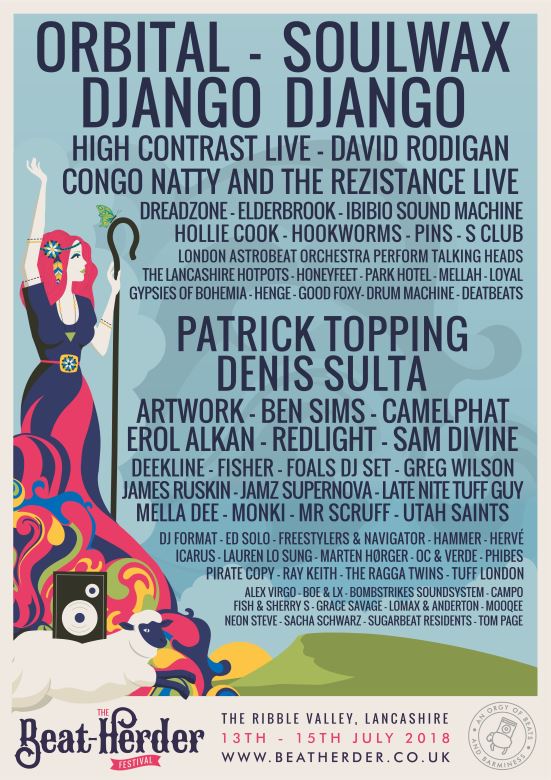 Beat-Herder, the weirdest, wildest and most wonderful party in the UK festival calendar, announces its first names for 2018.

Running from July 13th - 15th, Beat-Herder will once again transform Lancashire’s Ribble Valley into a technicolour party and escapist’s utopia, with an array of 20+ whimsical stages, world-class DJs and surprises aplenty.

Originating from free party roots, over its twelve-year history, Beat-Herder has become known for uniting the disparate subcultures of dance music, and this year’s line-up proves no exception. Headlining the main stage this year are dance legends Orbital, whose dazzling lightshow and leftfield anthems such as ‘Chime’ are perfect summer crowd-pleasers. They’ll be joined by the likes of dance-rock crossover pioneers Soulwax; the consistently unpredictable sonic adventurers Django Django; and national treasure and firm festival favourite David Rodigan. One of the original pioneers of jungle, Rebel MC akaCongo Natty will play with The Rezistance live alongside Hollie Cook, former member of all-female punk/reggae band The Slits, and electronic afro-funk stalwarts, Ibibio Sound Machine.

Confirmed for the Toil Trees stage – a majestic woodland setting and the beating heart of Beat-Herder – Patrick Topping will be bringing a mix of killer originals and alongside Glaswegian upstart Denis Sulta. Joining them are BBC Radio 1 dance music authority, Monki; perennial party-starter Artwork; First Lady of Defected Sam Divine, and Feel My Bicep cohort Hammer. OC & Verde - one of Pete Tong’s New Names for 2018 - are one of a host of fast-rising talents to grace the stage.

If something more spiritual is your vibe, head over to The Ring. Reflecting the Ribble Valley’s mystic heritage, The Ring pays homage to John Pratt - a mysterious local enigma who was said to possess the strength of ten men. 100 foot in diameter and accessed via a huge Stonehenge-style entrance, The Ring is the perfect venue to capture the original stadium house innovators Utah Saints, whose sampling of everything from Eurythmics to Slayer made them one of the genre’s earliest crossover sensations. Phibes take a similar approach by fusing all manner of electronic genres into a celebratory party mix.

A relatively new addition to the site, The Factory is a split-level arena in which you can clock in, but never clock out. Looking a little like Studio 54 transported 40 years into the future and 3500 miles east, it hosts Hookworms, the Leeds band whose current album ‘Microshift’ is one of the most critically acclaimed sets of the year. Foals will be swapping guitars for turntables with a special DJ set, while Manchester favourites PINS play live. Also confirmed is Elderbrook, whose ‘Cola’ collab with CamelPhat was nominated for Best Dance Recording at the Grammy Awards.

Music is just part of the experience at Beat-Herder. Entirely handmade from scratch, the stages stand out as something truly different in the increasingly identikit festival landscape. That attention to detail creates an immersive world full of beguiling and intriguing creative concepts. Which other festivals give you the opportunity to explore underground tunnels, dance to drum and bass in a chapel or get inked in the functioning tattoo parlour? And if the hedonism gets a little too much, guests can slow the pace by lounging in the heated hidden swimming pool or enjoy some retro entertainment at the site’s very own working men’s club.

Beat-Herder continues to exist as it did back when it started as a free DIY party in 1998: uncompromising, unwavering and distinguished by an overwhelming sense of community. Its reputation as one of the friendliest festivals around can be attributed to its loyal followers - friends, couples and families who create new memories to cherish in a bold and barmy atmosphere each summer.