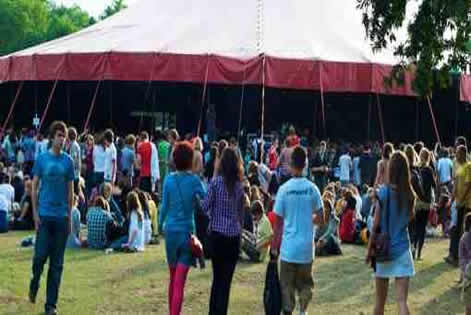 Underage festival is excited to announce a host of new names for Augusts’ teen festival. The only event of its kind in the world, Underage is headlined by Bombay Bicycle Club and features Glastonbury’s stand out performer Janelle Monae.

Current chart sensation Loick Essien joins an already stellar line up performing his hit single ‘How We Roll’.  Pulled Apart By Horses have been described by many as the best live band in Britain right now. These Yorkshire hardcore kids bring their furious, intoxicating, live mayhem to Victoria Park for a must see show.  Ms Dynamite is a pioneer of the UK garage scene and continues to be an influential voice having recently featured on tracks by a new wave of key players such as Katy B, Zinc, Magnetic Man and Redlight.  Johnny Flynn brings wit and charm aplenty as the leading light of the new wave of the bright, young, anti-folk Brit pack while Detroit newcomer Alex Winston is an artist tipped by many tastemakers for big things. She performs tracks from her much lauded ‘Sister Wife’ mini album.

Expect electro / grime from local girl Mz Bratt whose street smart lyrics and sassy style have already seen her working with the likes of Whiley, Redlight and Tinie Tempah.  Fixers hail from Oxford but their sound has more in common with the Brooklyn brigade and their huge, home-grown, psychedelic, sunshine, pop is set to soundtrack the summer.  The mysterious, mask wearing, London trio, Is Tropical always get the party started with their bass heavy, beat driven, pop influenced, lo-fi, dance music.
As ever, Underage champions a host of new and emerging talent giving young bands a platform to play in front of the world’s most rapturous festival audience.  Those picked this year are Abyss Dance Group, Andre Spence & Intesi-T, Ben Bezinna, Cynikal, Dave Gamble, Ellie Dibben, Foxx on Fire, Ghost You Echo, Hella Better Dancer, HypeMan Sage and Daprez, Lovelle, Mammoth Sound, Mixed Opinions, Out like a Lion, O.Children, Romance, RD, Spring Offensive, The Skellies, The Young Hearts, Violet, Voyeurist, YGLU and Zaidi.
With the audience age now lowered to 13 – 17 year olds, Underage festival continue to be the only destination for clued up, music loving teens and is set, once again, to be the best teenage party on the planet.