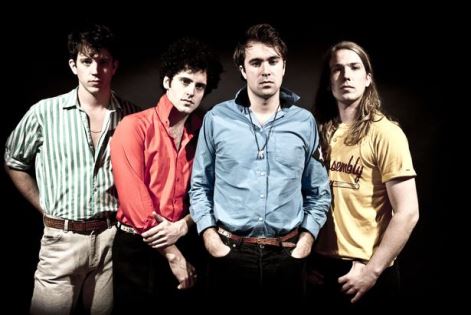 Following in the footsteps of rock greats to have graced the Jersey Live Main Stage in previous years including Kasabian, Paul Weller and Noel Gallagher, The Vaccines come to the festival for the first time, and we can’t wait to welcome them.

The platinum-selling West London four-piece, whose albums What Did You Expect from The Vaccines? and Come of Age are due to be followed up by their third studio album English Graffiti (set for release on Columbia Records on the 25th May) are one of the biggest success stories in British indie music in recent years, and have toured with rock megastars including The Rolling Stones, Arctic Monkeys, Stone Roses and Red Hot Chilli Peppers, confirming their big stage credentials. Drawing on influences ranging from 50s rock & roll and doo-wop to 80s hardcore punk and shoegaze indie music, they’re a band who have concocted the perfect cocktail of styles, all underpinned by a defined pop sensibility. Hotly-tipped for the top since their demo of “If You Wanna” was uploaded to Youtube in 2010 and subsequently hailed as ‘the Hottest Record in the World’ by Radio One tastemaker Zane Lowe, Clash Magazine predicted back then that the band could usher in a new era for guitar music. They haven’t failed to deliver on that early promise, and have become regular NME cover stars, been nominated for a Brit Award, and performed in arenas and on festival main stages the world over. Their commitment to brooding, anthemic pop music remains resolute, and we await a show of enormous proportions at Jersey Live.

Saturday on the Main Stage will feature a band whose arrival on the indie music scene has been as celebrated over the last 18 months as was that of The Vaccines just a few years ago. Wolf Alice are Ellie Rowsell, Joel Amey, Joff Oddie and Theo Ellis, and the North London four-piece have carved out a reputation as one of the country’s most exciting new bands for years, their blend of grunge and folk seeing them championed by Radio One, NME and many more. Already set for performances at Glastonbury, Reading & Leeds, T in The Park and Latitude, they’re set to be a festival favourite this summer and with their debut album My Love Is Cool, due out this June, 2015 is already looking like the Year of the Wolf!

Bringing another slice of London indie music to the island are the much-celebrated psychedelic garage rock outfit Palma Violets, whose profile has skyrocketed since their single “Best of Friends” was voted NME’s song of the year in 2012 and they were nominated for the BBC’s Sound of 2013 poll. Signed to the national treasure of British indie labels, Rough Trade, whose keen eye for a band has seen them discover the likes of The Smiths, The Libertines and The Strokes throughout their illustrious history, the band releases their second album Danger In The Club later this month.

Stepping in at short notice to fill a vacated slot on the Main Stage in 2014, Sunset Sons were so jaw-droppingly good that we just had to have them back, so it brings us great pleasure that the British/Australian rockers return to the Jersey Live Main Stage this year. Since that appearance at the festival last September, they have grown and grown, and a record deal with international label giants Polydor and a nomination for the BBC Sound of 2015 poll (won by fellow JL2015 artists Years & Years) are confirmation of their arrival in the big time. Likened to the high-energy stadium rock of Kings of Leon, Sunset Sons are sure to go down a storm with the Jersey Live audience once again.

The second wave of line up announcements concludes with two bands at very different stages in their musical journeys: Merthyr Tydfil four-piece Pretty Vicious are one of the most hyped new bands of 2015, having recently signed a deal with major label Virgin and have been compared to the likes of their Welsh compatriots Super Furry Animals and Manic Street Preachers. They only played their first live gig in December and the oldest members are only 17, yet they’ve already managed to grab the attention and public support of tastemakers Zane Lowe and Blur’s Dave Rowntree.

In the music business for a significantly longer period of time are Scottish folk rock band The Proclaimers. Comprised of identical twin brothers Charlie and Craig Reid, they have toured the world extensively since their formation in 1983 and their songs “I’m Gonna Be (500 Miles)”, “Sunshine on Leith”, “I’m On My Way” and “Letter to America” remain some of the best loved British songs ever put to record. They have released nine studio albums and their music has been featured in many a movie, including Dumb & Dumber, Shrek and of course the film Sunshine on Leith, ensuring that their work is forever ingrained in collective pop culture conscience.

Formed in Clapham in 1985, The Stereo MC’s have been leaving their mark on the landscape of pop and dance music for over 20 years. Often labelled as one of the UK’s most iconic bands they have toured with U2, Peter Gabriel, Happy Mondays, Lenny Kravitz and many more. With 9 studio albums to their revered name, they're responsible for such hits such as 'Connected', 'Elevate My Mind' and 'Step It Up', and return in 2015 with a brand new album and live show. The legendary Stereo MCs will perform their classic breakthrough album Connected in its entirety for the very first time and showcase songs from their new Collected Album Box Set. Their blend of dance, rock and Hip Hop makes them the perfect party band for the Jersey Live Main Stage.

There are many more acts to be announced for the 10,000 capacity festival across six stages in total: The Main Stage and Dance Stage hosting stellar indie and dance acts, with the JT Stage serving up family entertainment in the form of local and up-and-coming international live music, comedy and spoken word artists by day, and acts for the grownups by night. A revamped Hospitality Stage is set to return, offering Hospitality ticketholders the chance to enjoy intimate performances by Main Stage acts as well as exclusive performances not available elsewhere at Jersey Live. Finally the Full Flow Locale tent celebrates the island’s rich and diverse dance music scene, with Jersey’s top DJs lining up at the festival once again.