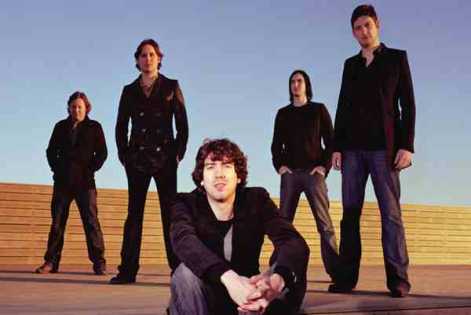 DF Concerts and founding partner Tennent’s Lager are thrilled to announce that Snow Patrol and Kasabian will join The Stone Roses as headliners for this year’s T in the Park festival, in front of the greatest audience in the world.

They will be joined by an ultra-impressive bill made up of the world’s ‘must see’ acts across the weekend of 6-8th July 2012.
Firm favourites with festival crowds across the globe, Snow Patrol bring their epic anthems back to Balado to headline the mighty Main Stage.  Festival frontman Gary Lightbody hailed T in the Park as “the best weekend ever” when the band gave one of the most memorable T in the Park headline performances to date, in 2009. Since T in the Park first booked an unknown Snow Patrol in 1999, the band have soared to international stardom and gone on to sell in excess of 11 million albums worldwide.  Having just completed their sold out ‘Fallen Empires’ tour of the UK and Ireland, the band are off to tour Europe and the U.S.A before heading home, fired up and ready to go at Balado.
Having announced their ‘live resurrection’ to the delight of dedicated fans across the globe, The Stone Roses will undoubtedly provide THE seminal music moment of the summer with their hugely anticipated headline performance at T in the Park 2012.  All eyes will be on Balado when the Manchester legends take to the stage for a very rare UK festival appearance and their only live show in Scotland, not to mention a truly historic moment for T in the Park.
Kasabian are certainly on fire right now, with their fourth studio album Velociraptor taking the group to stratospheric new levels. The follow-up to the acclaimed West Ryder Pauper Lunatic Asylum, the current album was recorded in Leicester, mixed in San Francisco and written and produced by the group’s guitarist Sergio Pizzorno. Kasabian are an incendiary live act who consistently top the polls of the bands festival fans want to see.  Currently up for three NME Awards (Best Live Band, Best British Band, Greatest Music Moment of the Year), Kasabian first played T in the Park in 2004 and have been consistently championed by T in the Parkers ever since.  The Leicester lads make a very welcome return to the top of the bill to bring T in the Park 2012 to a raucous close.
Kasabian said: “It’s an honour that we’ve been invited back to play T in the Park. It’s always been one of our favourite UK festivals and after having such a blast in 2010, we can’t wait to do it all over again.”
The headliners join an already stellar group of top acts confirmed for T in the Park 2012, including Florence + the Machine, Noel Gallagher’s High Flying Birds, The Vaccines, Two Door Cinema Club, The Maccabees, Frank Turner, Miles Kane, The Horrors and Maverick Sabre.
Fans can expect more T in the Park 2012 highlights from an array of festival favourites including newly announced artists in bold: (FRIDAY) Snow Patrol, Tinie Tempah, New Order, Florence + the Machine, Example, Professor Green, Kaiser Chiefs, The Temper Trap, The Darkness, Miike Snow, Labrinth, Mastodon, Pulled Apart By Horses, Tribes (SATURDAY) The Stone Roses, Noel Gallagher’s High Flying Birds, David Guetta, Calvin Harris, Jessie J, The Vaccines, Two Door Cinema Club, Emeli Sandé, Ben Howard, Amy Macdonald, The Courteeners, The Maccabees, Enter Shikari, Rizzle Kicks, Peter Doherty, The Wailers, Dappy, Alabama Shakes (SUNDAY) Kasabian, Elbow, Chase and Status, Skrillex, Happy Mondays, James Morrison, Frank Turner, The Enemy, Miles Kane, The Wanted, Maverick Sabre, Twin Atlantic, The Horrors, Christina Perri, Devlin, Bellowhead, Little Roy, Spector, Band of Skulls, Nicki Minaj
The Slam Tent is also back to celebrate 16 successful years at T in the Park and for the very first time, will be open on the Friday with Sven Väth at the helm, joining Slam for extra-long sets from 5pm until midnight to bring the big club atmosphere to the Slam Tent. Other confirmed Slam acts on Saturday include Major Lazer, Skream featuring Sgt Pokes, Benga, Erol Alkan, Fake Blood, Jack Beats, Crookers with Dubfire, Joris Voom, Maya Jane Coles, Len Faki, Pan-Pot all taking to the stage on Sunday 8th and with many more still to be announced.
Geoff Ellis (Festival Director)
“It’s really important to us that we listen to the fans and make every effort to book the bands they tell us they want to see. With some of the biggest bands and the greatest audience in the world, we hope the weekend of 6 – 8 July will be unforgettable for fans. Opening the campsite gates for the first time is still my favourite moment of the festival weekend and I can’t wait to see you all in July!”
T in the Park 2012 takes place on 6-8th July 2012. Click here for more info on tickets

Published on 24 February 2012 by Wayne Feltham

T In the Park 2012 Snow Patrol Kasabian The Stone Roses