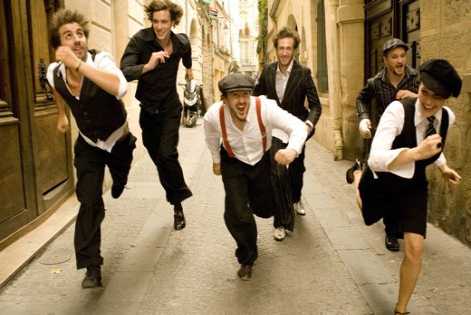 Summer is in the air at BoomTown HQ... With last week’s first dollop of astonishing acts announced including; Reel Big Fish, Alborosie and Tanya Stephens the festival spirit is riding high, and now BoomTown are on the brink of combustion by announcin

Ready and raring to take over the BoomTown Fair Centre as the Sunday Night headliner are French electro swing supremo’s Caravan Palace, whilst over on the Arcadia stage fellow Parisians, Dirtyphonics will be bashing out their mighty combination of electro, dubstep and drum & bass. Meanwhile Natty will be bringing his chilled out sunshine reggae to the Lion’s Den for a welcome Saturday afternoon rest-bite in preparation for the heavy tunes on Saturday night, from the mighty Jack Beats at Bassline Circus.
Caravan Palace have been taking European dancefloors by storm since 2008 with their effortless panache and genre defining mixture of classic electro and swing. After unfortunately having to pull out of last year’s festival, BoomTown’s council have got their spats and Brylcreem at the ready to bust out some original swing mastermoves to Caravan Palaces’ frantic, futuristic and melodious Charleston tunes fit for the Town Centre!
The union of Dirtyphonics and Arcadia for a sensational Sunday Night headliner is like a match made in post-apocalyptic Mad Max heaven! With their imposing industrial sculptures that have blighted the landscape at many-a-leading festival, Arcadia are well known for show-stopping laser, fire and aerial shows and Dirtyphonics will provide the perfect soundtrack and presence for this untameable beast! With their celebrated innovative production style and provocative live performances, this quintet of French pioneers have become renowned for causing a ‘ruckus’ and a ‘performance that leaves competitors in the dust’ - Knowledge Magazine. This is one performance not to miss and is guaranteed to thrill and alarm in equal measure!
Hailing from London, Natty has been involved in music for the majority of his life. With influences ranging from South Africa, Italy and the UK, Natty moves effortlessly from Reggae to West African Horns mixing in a fresh take on popular songs from completely different genres such as Armand Van Helden’s “U Don't Know Ne”. With two top 20 singles, “July” and “Bedroom Eyes” and a #1 hit in Japan with “Badman.” Natty has reached both critical and popular success as well as toured with some of the music industry’s greatest; including gigs with Baaba Maal, Lee Perry, and Adele. Natty will bring his very own feel good summertime vibes to the banks of the Lion’s Den on Saturday afternoon for a well earned bit of reggae relaxation therapy for the residents of BoomTown!
The Saturday Night Bassline Circus headliners come courtesy of the heavy tuneage of Jack Beats. This multiple award winning DJ duo is made up of Niall Dailly (DJ Plus One of Scratch Perverts fame) and Ben Geffin (The Mixologists). They have had an immediate and profound effect on the club scene since teaming up in 2007; producing transcendent remixes for La Roux, Passion Pit and Florence & The Machine amongst others and releasing their genre bending ‘U.F.O’ EP on Hervé’s Cheap Thrills Records.  With influences as diverse as Timbaland, Rage Against the Machine, A Guy Called Gerald and Sebastian, the two began to hone a style fusing House, Hip Hop and Dubstep with Electro and Drum & Bass… to create their own cutting edge sound that will blow the roof off BoomTown’s Bassline!
On top of these three top of the bill acts, BoomTown have ensnared the following additions to the line-up: For the ska, swing, punk, rockabilly stages BoomTown is pleased to welcome back The Beat and Dub Pistols, along with The Slackers, Gadjo, Sick Note, Pronghorn, Sonic Boom 6, Swing Zazuou and Gypsy Hill. New for the ragga, dub and dancehall stages will be Bush Chemists, Serial Killaz, Laid Blak, Jaya the Cat, The Barley Mob, Demonlition Man and many more... On the serious rave and bass heavy venues such as Arcadia and Bassline Circus, additions to the line-up include, Chris Liberator B2B Dave the Drummer, Shy FX, JFB, SL2 (live) and Ed Solo and many, many other bassline bashers!
With loads more acts and headliners to be announced, along with more information on the new stages, venues, street parties and camping facilities, the countdown to the world’s maddest fair has only just begun!
Here’s what the BoomTown’s Mayor has to say on what’s to come for 2012, as well as updated ticket news...
“The town walls have expanded dramatically for 2012, giving us almost double the space of 2011, yet the population is only enlarging a fraction to accommodate the new streets and stages, keeping the same great intimate BoomTown atmosphere.
Ticket sales are up 3 times on last year and it's becoming clear that most attendees left the fair last year and have invited all their friends to come along his year!!! Absolutely fantastic news, but it does mean the event will sell out much quicker than usual and if you don't want to miss the madness then we advice that you book your passes as soon as possible!”
BoomTown 2012 is over the weekend of 9 – 12th August